FIA Formula 2 (formally known as GP2) is arguably one of the most underrated racing championships around, because it never disappoints when it comes to on-track action and drama.

It should get more viewers and attention, especially as so many drivers from F2 have made it to F1 and other top racing series.

2017 is shaping up to be a pretty good year for F2 with some great drivers on the grid. Here’s why you should keep an eye on the series this year:

Because all F2 cars are exactly the same, the racing is always incredibly close and evenly matched. This often gives us a large number of race winners and podium finishers each season, and makes it tough to predict who will do well each weekend. If only F1 had that kind of uncertainty…

As we mentioned before, a load of successful drivers from top series like F1 and the FIA WEC have passed through the F1 feeder series. You’ll recognise the names of past GP2 champions like Lewis Hamilton, Nico Rosberg, Romain Grosjean and Nico Hulkenberg…

Sure, each year you get some hopeless drivers (Cecotto, Canamasas) who will never get close to F1, but there’s also a load of talent in there too – even if they have an OK first season, drivers can often be title contenders in their second or third years.

There are some well-known names on the 2017 grid, including Norman Nato, Oliver Rowland, Charles Leclerc and Antonio Fuoco. It’s fair to say this year’s grid has shaped up nicely.

The drivers are still learning and on the road to F1, so mistakes often happen. Sometimes, they can be pretty silly. Other times, they’re funny, or just confusing. Take Sean Gelael becoming the first driver to crash in the Yas Marina Circuit tunnel as an example…

With equal machinery and some awesome talent, we often get title fights going down to the wire and contested by a number of drivers. Sure, that doesn’t happen all the time, but we often see championships decided in spectacular style and you should never make predictions early in the season, because things can change fast.

The GP2/11 car is getting on a bit now, there’s no denying that. It was introduced for the 2011 season but it’s been kept in the series to cut costs, which is a good thing for teams and drivers. But, we’re not going to lie, the GP2/11 is a good-looking machine, sleek, elegant and pretty simple. The V8 engine sounds amazing too.

We dropped in the silly and funny mistakes earlier, but sometimes these errors can cause big shunts. Some of them are incredibly dramatic and spectacular, as the video above shows. Multi-car crashes happen more often than you’d think and it all adds to the entertainment and drama of Formula 2.

A big plus for drivers and teams in the series is that it follows the F1 circus around for most of the year, so we get to see these V8-powered beasts and young drivers let loose on some of the best race tracks in the world. A pack of F2 cars flying through Eau Rouge or towards Ascari at Monza are incredible sights and also produce great racing too.

Who’s your tip for F2 success this year? Let us know in the comments! 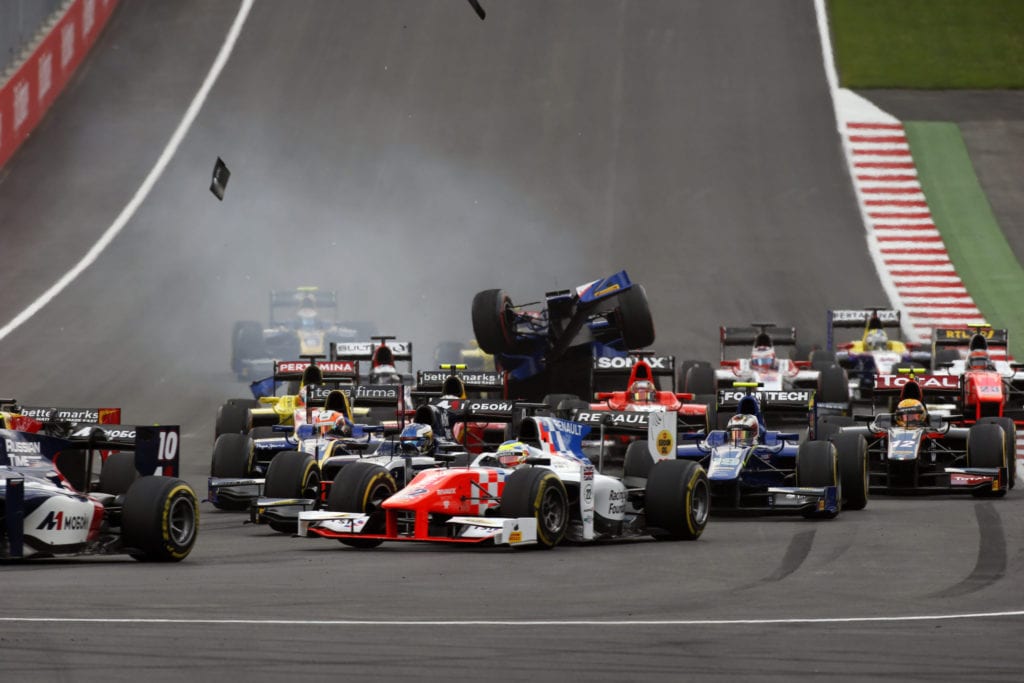