7 Single-Seater Juniors To Watch Out For In 2018

One of the most exciting aspects of any new season in junior single-seaters is when a driver who has shown plenty of promise in a lower category makes that next step on the motorsport ladder and show a wider audience what they are all about. Here are seven drivers who have shown enough promise to earn promotion for 2018 and are aiming to take their respective championships by storm.

The French-Argentine driver picked up nine poles and seven victories en route to the 2017 Eurocup Formula Renault 2.0 title, and his early success has led to Carlin inviting him to step up and race in the European Formula 3 Championship.

Fenestraz has sighted winning the rookie’s classification as his main objective but is also ambitious to assist Carlin in resealing the title. In Fenestraz, the team has captured a relatively new member of the Renault academy who has already shown a strong turn of pace in F3 machinery, with a cameo at the Nurburgring last season clearly giving Carlin enough reason to promote the 18-year old.

The good news for Ferrari is that its driver academy is filled with talent. The bad news for this talent is that it will take exceptional results to stand out from the other drivers within the academy network. Marcus Armstrong had a very impressive 2017, winning the Italian F4 Championship and finishing as runner-up in the German equivalent. The New Zealander steps up to European F3 for 2018 with the accomplished Prema team.

Ferrari has backed Armstrong since his karting years so is one to watch this season in that another outburst of strong performances and title contention will more than likely yield another swift promotion for 2019. Armstrong is currently in a position in which the sky is the limit, but faces stiff competition in the intense environment of Euro F3.

In entering the European F3 Championship with the Hitech GP team, Ahmed is putting himself up against continental challengers after an incredible title-winning season in the BRDC British F3 Championship. Last year, Ahmed surpassed the biggest historical benchmark in British F3 and became only the second driver in its history to register more victories than Ayrton Senna over the course of a British F3 campaign (the other being Jan Magnussen).

This sets outs a big statement of intent, but only one that can be acted upon by progressing and showing an edge at a slightly higher level. Euro F3 provides this arena and the competition is tough, with teams like Prema and Carlin hugely competitive and other newcomers to the series such as Sacha Fenestraz and Marcus Armstrong bringing their own impressive records to the series too. Given that last season’s Euro F3 champion Lando Norris is now embarking on a Formula 2 campaign and has a reserve role with McLaren, it is clear that there are big implications and rewards in winning this championship. Ahmed in particular shows the potential to be impressive in his rookie season.

2017 GP3 runner-up Jack Aitken now finds himself as the highest placed Renault Academy driver on the motorsport ladder. 2018 will provide him with an opportunity to take another swing at the driver who beat him last season, George Russell, given that they will be racing as teammates again in Formula 2 this year.

Aitken made steady progress last season, improving on his fifth place in the standings from the year before. He is well placed to benefit from being in the Renault Academy if anything changes with the team in F1, but the inter-team battle at ART in 2018 surely has more weight to it than usual. Here are two drivers who fought for the title in GP3 and must fight again. For Aitken, beating his highly-rated teammate will be at the top of the agenda.

2018 is going to be huge for Mercedes junior George Russell as he sets his sights on a tough maiden Formula 2 campaign with ART. Last season, he participated in some practice sessions as a test driver for Force India alongside his duties in GP3, in which he secured the title convincingly, picking up half of the pole positions and feature race victories available.

Undoubtedly the biggest season of his junior career awaits, with an established role in an F1 team already there, Russell must aim for victories and highlight himself in F2, as to attract even more interest. At the age of 19, Russell is already in a great position, and a strong 2018 campaign in F2 will only convince us of the inevitable even more.

Fukuzumi steps up to F2 in 2018 with Arden International. On the face of it, the appointment could simply look like a team owned by Christian Horner opting for a driver who showed some great racecraft on his way to securing third place overall in GP3. But considering that Fukuzumi is a Honda prospect, doing well in F2 could lead to a future with Toro Rosso. There are a lot of ‘ifs’ in that scenario, but the Japanese is undoubtedly well placed at Arden and needs another solid campaign of racing in 2018 to continue on his trajectory.

Lando Norris showed a remarkable turn of pace in the United Autosports Ligier during the 24 Hours of Daytona in which his pace was closely compared to that of teammate Fernando Alonso. His 2018 is already off to a promising start, but having claimed the European F3 title as a rookie in 2017, his sights are now firmly set on establishing himself in F2 with Carlin.

Competing in F2 compliments his reserve driver role with McLaren and provides an ideal testing ground for a driver who has looked for a while like he’s destined for Formula 1. It’ll be interesting to see how Carlin goes in its return to the series, too, and the fact that it’s Norris driving one of the blue machines just adds further weight to something special potentially happening.

What young drivers will you be looking out for in 2018? Let us know in the comments! 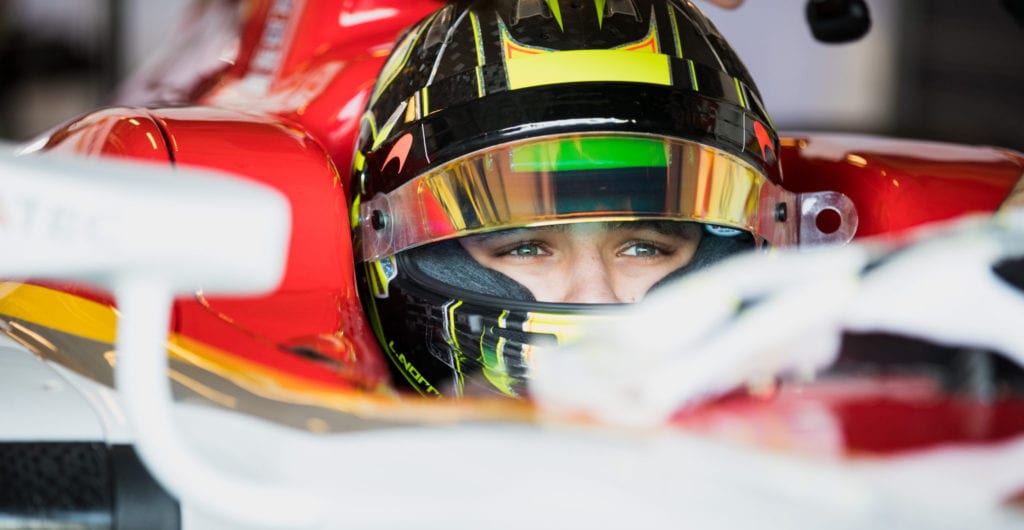