Although modern endurance racing is basically just a sprint race that happens to last for a really long time, in years past speed wasn’t always the most important element of success at Le Mans. Reliability, driveability and simplicity can go a long way to achieving a good result – as can grit, determination and a good old fashioned slice of luck.

Here are seven cars which ended up being somewhat unlikely winners of the French classic.

The Group C era of sportscar racing was dominated by the likes of Porsche, Sauber, and Jaguar. But for years Mazda had been persisting at Le Mans with its rotary-engined cars, albeit without much success.

With the landscape of endurance racing changing in the early 1990s (basically Bernie Ecclestone was worried it was getting more popular than F1, so he killed it off) 1991 would be the last chance for Mazda to achieve success, so entered two of its 787Bs for the race. One car (the No.18) would stick to a set lap time whilst the other one (No.55) would go at a flat-out pace in the hope of luring rivals into running a pace they couldn’t managed.

The Mazda’s didn’t qualify well but in the race their pace was good, and the No.55 car gradually worked its way up into a podium position by Sunday morning. When both Sauber-Mercedes’ hit trouble the Mazda was on hand to capitalise and it went on to take a famous win. Johnny Herbert drove the final stint and put in so much effort that he had to be dragged exhausted from the car, and was unable to join teammates Volker Weidler and Bertrand Gachot on the podium.

To this day it is the only win for a rotary-engined car and (so far) the only win by a Japanese manufacturer. Curious as to how the car had run at such a pace for so long without issue, Mazda shipped it back to Japan and publicly disassembled it, where it was discovered that the components were in such good condition that it probably could have run for another 24 hours without problems!

Of Porsche’s many, many successful sportscars, the 936 is probably the most underrated. It had won Le Mans in 1976 and 1977, but after that Porsche decided to take a back seat with its factory efforts and let privateer outfits do the donkey work.

But in 1981 Porsche returned with a 936 to give the model its third win. Nothing particularly weird about that you might think, and you’d be right – until you learn that the car had already been consigned to the Porsche museum!

There were new regulations (what would become Group C) being introduced for 1982 and Porsche wanted to test some things out, so they ‘un-retired’ not only one of its cars, but also managed to get the legendary Jacky Ickx to come out of retirement to drive it.

Along with Derek Bell they executed one of the most dominant wins in the history of the race, pulling out a huge lead in the early stages and then going on to win by 14 laps with a virtually trouble-free run – almost unheard of at Le Mans, especially in that era!

The McLaren F1 turned out to be a very good racing car but it was still a road-based GT car, and no one really gave it a chance at Le Mans in the face of proper sports prototypes.

However in a race where it rained for an astonishing 17 hours the McLarens ended up being the cars to beat. JJ Lehto in particular put in an incredible performance, and at times he was 20 or 30 seconds faster a lap than anyone else could manage. By the end of the race things started to dry out and the McLarens lost their advantage, but by that time they’d already built up enough of a lead. Lehto, along with Masanori Sekiya and Yannick Dalmas, ended up taking victory, and McLaren had done so at its first attempt. It was a proper triumph of the underdogs.

Oh yeah, and the winning car was sponsored by a Japanese penis clinic, because of course it was.

It had the body of the 1991 Jaguar XJR-14 with the (albeit with the roof chopped off), the Porsche engine was first developed in the early 1980s, it was engineered by Tom Walkinshaw Racing and it was entered by the Joest Racing team. I think that’s what you call a ‘collaborative effort’. Porsche had designed the car for competition in IMSA but a rule change left it without a championship to race in, so Joest asked if he could race it at Le Mans.

Despite being a complete mish-mash the car ended up being incredibly competitive, and won the 1996 event in the hands of Manuel Reuter, Davy Jones and a 22-year-old Alex Wurz – who to this day is still the youngest ever overall winner at Le Mans.

The following year the team entered the exact same chassis again, and guess what? Yup, it won again! This time it was in the hands of former Ferrari F1 teammates Michele Alboreto and Stefan Johansson, both of whom were joined by a young Dane by the name of Tom Kristensen taking the first of what would be nine Le Mans victories.

By now Porsche had cottoned on to the fact that this bodge of a prototype was actually pretty good (after all, it had beaten Porsche’s own 911 GT1s) and took over full control of the project. But the cars suffered bad reliability in 1998, at which point the cars were shelved for good.

The car had raced with success in Grands Prix in the late 1940s and driver Louis Rosier figured it might make a decent endurance racer. He added some things like headlights and fenders and, after setting the first ever lap of Le Mans at an average speed of over 100mph, promptly went on to win.

Rosier shared driving duties with his son, Jean-Louis – although to say he ‘shared’ is probably stretching it a bit, since Louis drove for more than 23 and a half hours!

That same year Rosier drove for Talbot-Lago in the first year of the Formula 1 World Championship and snagged a couple of podiums on the way to fourth in the championship, with only the Alfa Romeos ahead of him. Now that’s a versatile car!

The Porsche 962 (and its earlier variant, the 956) is one of the most successful cars in the history of Le Mans, winning six times on the trot between 1982 and 1987. Even when the car was outclassed by newer and more advanced machinery it still remained a factor, but its final victory came down to a bit of class rule exploitation.

So many 962s had been built that Porsche realised that if a couple of road cars were built it would qualify as a GT car, despite being a prototype. A couple of had to make a couple of changes which made the car a bit slower than it had been in its Group C heyday, but this was offset by the massive advantage of being able to run a much bigger fuel tank than any of the cars in the Prototype class.

In the race the cars quickly moved up to the head of the field and saw off competition from main rivals Toyota, with Hurley Haywood, Yannick Dalmas and Mauro Baldi winning the race by a lap. It was one last hurrah for the Porsche 962, as unsurprisingly the rules were hastily changed for the following year.

The Rondeau M379 wasn’t the quickest car and the reliability of its Cosworth DFV engine was a surprise, but even so it managed to reach the end of the race to win – just. Sheer consistency kept it in contention against the much faster (but less reliable) Porsche of Jacky Ickx and Reinhold Joest, but a clever tyre gamble at the end of the race ended up sealing the deal for the small French outfit.

Jean-Pierre Jassaud crossed to line to win but it’s the achievement of his teammate that makes the win unique: Jean Rondeau became the first and only driver to win Le Mans in a car bearing his own name. 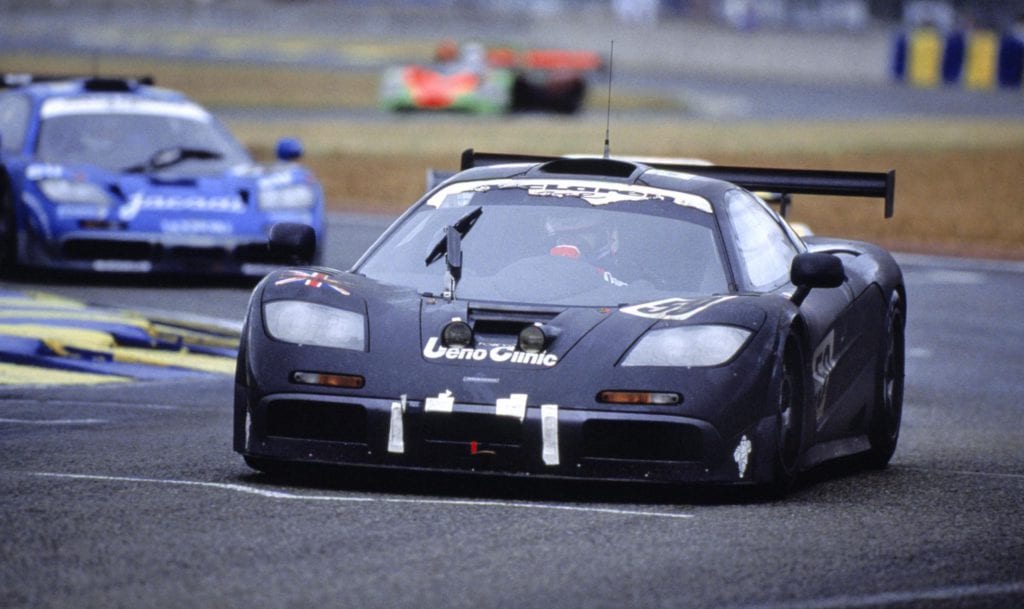