As motorsport series go, the Caterham Academy is about as entry-level as it gets – the series is reserved for novices only, and the whole thing is designed to make your first steps into becoming a racing driver as smooth as possible.

However, being an amateur racing driver doesn’t quite afford the same luxuries as a professional, as I found out…

When talking to Jon Bryant – aka Snappy Racers, the official Caterham Motorsport photographer – about how my race at Castle Combe had gone, he said something very interesting: “You genuinely became a racing driver this weekend.”

Straight away, I knew exactly what he meant. Yes, I technically became a racing driver after the first Academy race at Brands, but it wasn’t until Combe that everything fell into place. Being aggressive at the start, maintaining pace, trying for overtakes, pressuring the guy in front – it all suddenly felt natural. Something just ‘clicked’.

It wasn’t only the on-track stuff. I turned up and knew exactly when and where I needed to be going for signing on, putting the car through scrutineering and attending the briefing. I didn’t panic and pointlessly don all my race gear half an hour before I needed to go to assembly. I actually knew what I was doing.

You don’t go into amateur racing expecting the big motorhomes and private jets of Formula 1, but even so, the complete lack of glamour associated with the lower echelons of motorsport really does take you by surprise.

The penny drop moment came when changing into my overalls in a muddy toilet stall at Aintree while being forced to listen to the man in the next cubicle experiencing a violent bowel movement. Followed by the panicked jiggling of the handle as he realised the flush was broken.

Nightmarish stuff, I’m sure you’ll agree, but pretty soon you understand it’s all part of the experience. I think…

Here’s another side to that lack of glamour: if you’re not a morning person, you’re going to have to change that before taking up racing. Your allotted sign-on time will depend on when your practice/qualifying session kicks off, but it could be as early as 7 o’clock. And since you’ll be racing all over the country, an early sign-on and/or briefing time is going to mean you’re either going to have to leave home at the crack of dawn, or at what I like to call bastard o’clock. Departing at 3.30am to get to Aintree Circuit near Liverpool, for instance, was a particularly unpleasant experience.

Turning up the day before and camping/paying for a hotel room might get around this issue, but if you’ve booked some Friday testing sessions, you’ll still be setting your alarm for an indecent hour. All of this is easily countered by getting an early night and consuming a preposterous amount of coffee upon arrival to the circuit.

I always pictured competition in lower-level championships thusly: you turn up, have a practice session, qualify, race, hopefully, get through said race without binning it, then go home. And have a kebab.

However, unless you have some extraordinary natural talent (most don’t, and I’m certainly in that camp), it’s best you’re on track much more than that. I was initially taken aback by just how often people are out on track outside of the official test/practice sessions, but it’s the same story in other championships too.

The technical regulations of Academy may mean that you can’t throw money at the car to get you further up the grid, but that doesn’t automatically make it a level playing field – you have to decide how much time and cash you want to invest in yourself as a driver.

“You were SO close to hitting that guy!” my friend Chris exclaimed just after the race. It took me a few seconds to realise what he was talking about – the point Simon Batterbee span on the exit of Camp just in front of me, when I came perilously close to smashing into the side of the Seven at 60mph. Right in front of much of the Caterham Motorsport staff contingent who were watching on the main straight. Apparently, there was a rather sharp intake of breath…

But the rest of the race was just so hectic, with an epic 10-lap battle with Andy Tate (which I lost, and didn’t care because it was ridiculous fun) and a light rain shower arriving in the closing stages, I’d completely forgotten about it. It seemed bizarre for something so major to slip your mind, but that shows just how focused you are when racing.

I’ve never been much of a hat wearer, but that’s changed this year, specifically during race weekends. Why? Because helmet hair. Constantly pulling off a sweaty Nomex balaclava just makes matters worse…

When you’re far from home and throwing all your energy into racing, it’s important to have friends and/or family with you to share not just the highs, but the lows too. I’ve been lucky enough to have mates come along to support me and keep me company when waiting around for the next session, and its been invaluable. A particular shout-out has to go to Chris and Ryan (above), both of whom got up at a hideous hour to drove down to Castle Combe with a support car, a gazebo to keep ‘my’ Caterham cool and a even a plug-in cooler. Cheers guys! 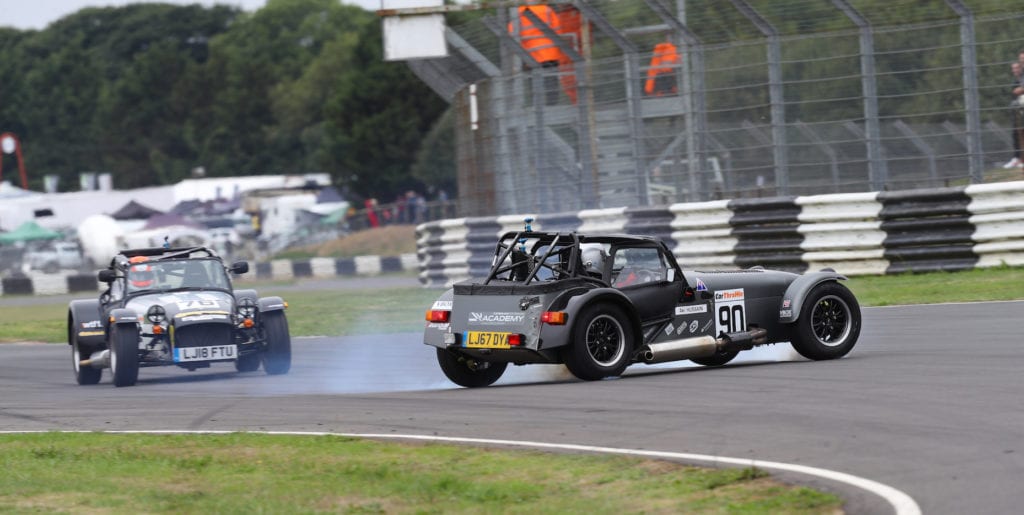