We are heading back to Istanbul for the Turkish Grand Prix this weekend, but what has happened since F1 last visited the country in 2011. Let’s find out.

There were two Lotus teams on the grid

Sounds confusing? Oh, it was. Back in 2011, there was a Team Lotus and Lotus-Renault team.

Team Lotus bought the rights to their name and planned on running the team to show their appreciation of the history within the sport. Meanwhile, Lotus cars announced they would be joining as a title partner for the existing Renault F1 team at the end of 2010. The idea would be that Lotus would eventually take over the team from Renault during the course of the next few seasons.

Originally, Team Lotus had signed a contract with Cosworth engines, but this was terminated and instead Team Lotus partnered with Renault for their engines.

You can see how this really didn’t help the situation. We now had Team Lotus with a Renault engine, and then Lotus-Renault who also was powered by Renault. My brain hurts even thinking about it.

Team Lotus had the 8th and 9th fastest F1 drivers ever

In 2011, Team Lotus had the dream lineup of Jarno Trulli and Heikki Kovalainen. Might sound fairly underwhelming, but it was one of the fastest pairings in F1 history according to a ranking from Amazon Web Services (AWS).

After collecting qualifying data since 1983, AWS reportedly removed any variables from the equation to source who were the fastest drivers and the duo of Trulli and Kovalainen were certainly a surprise edition in the top ten. Kovalainen found himself in 8th just +0.376s behind fastest-man Ayrton Senna, with Trulli +0.409s behind Senna’s time that topped the timesheets.

Mercedes were 5th in the Constructors’ Championship after the race

It might feel like Mercedes have been dominating F1 since the dawn of time, but rewind to 2011 and Mercedes were still a fairly new team within the sport. They had been Brawn GP before, a team which won the constructors’ championship in 2009, but overall it was the likes of Red Bull, McLaren and Ferrari who were at the top of the game.

After the 2011 Turkish Grand Prix, Red Bull were leading the constructors’ championship with 148 points, whereas Mercedes were down in fifth with just 26 points to their name. How times have changed.

The man. The myth. The legend. Pastor Maldonado won his first and only race at the 2012 Spanish Grand Prix, meaning that when F1 was last in Turkey he was just a driver that seemed to have a high percentage of involvements in accidents on-track.

Despite having success at the Istanbul circuit in recent years, even winning the GP2 race the year before, Maldonado inevitably crashed during the 2011 Grand Prix weekend and would go on to finish the race 17th.

F1 fans wanted Hulk to have a race seat

This could very much be a headline from this past week, but it is in fact from the 2011 Turkish Grand Prix when fans made banners for the grandstands that wished Hulkenberg was ‘Hulken-back’ in F1 (I’m sorry).

The Hulk, who raced with Williams in 2010, was dropped by the team at the end of the year and didn’t have a full-time race seat for the 2011 season. Instead, he was the test and reserve driver for Force India. Fortunately, Force India gave Hulk a race seat for the following season and he remained in F1 until 2019.

Now, without race seat again and being this season’s super substitute, many fans are calling on Hulkenberg to be given a permanent race seat once again.

Hamilton and Schumacher were racing together

We had the two GOATs of the sport racing against each other in the shape of Lewis Hamilton at McLaren and Michael Schumacher at Mercedes. Schumacher made his return from retirement the year before, and would go on to race in F1 until the end of the 2012 season.

Hamilton finished the 2011 Turkish Grand Prix in 4th, with Schumacher in 12th.

It is mad to think there are 13 drivers’ titles in that photograph. Of course, that could become 14 if Hamiton manages to secure his seventh drivers’ title win in Turkey this weekend.

Hamilton and Vettel had only won one title each

Hamilton, who is set to win his seventh drivers’ title in Turkey this weekend, only had one championship to his name when F1 last raced in Istanbul.

The same goes for Sebastian Vettel who had won his first title the year before and who would go on to earn himself three more titles from 2011-2013.

It is crazy to think that between them both they have won ten titles, with eight of those being since we were last in Turkey. 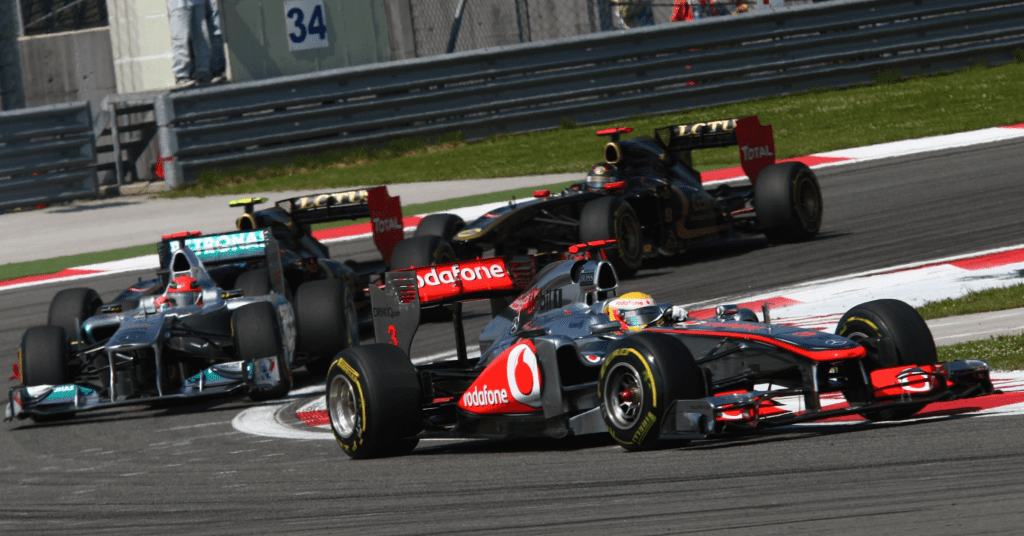