The 2020 Austrian GP kicked off the season with a bang – in Alex Albon’s case, literally. We could hardly have wished for a more exciting race after having to wait so long and the great thing is that we’ve only got to wait a few days before we see it all again.

But, when you look beyond the exciting moments and key storylines of the race, what things have we learnt that could apply for the rest of the season?

The Red Bull Ring hasn’t always been the best track for Mercedes over the years, which makes the fact that Valtteri Bottas and Lewis Hamilton were more than half a second quicker than anyone in qualifying all the more remarkable. The W11 looked incredibly stable throughout the weekend – especially in the high-speed corners – and that advantage continued when it comes to race pace.

It’s true that the Red Bull Ring isn’t particularly representative of most circuits on the calendar, but the fact that Mercedes had such a big lap time advantage on such a short circuit will be worrying for the others. It’s probably not quite 2014-2016 levels of dominance, but the team seems to be more comfortably in front than it has been for the last three years.

Bottas has come out of the blocks fighting. He was quicker than Hamilton in all three parts of qualifying, seemed a lot calmer than the Brit when managing the issues affecting both cars, and generally drove a measured race to open his season with a win.

It’s worth remembering that the Red Bull Ring is always somewhere Bottas has gone well and that he also started the 2019 season well before dropping off. Hamilton also looked to have the upper hand in terms of race pace when everything was running smoothly so it’s not like Valtteri has suddenly morphed into some sort unbeatable alien.

However, in a shortened season where minimising bad races is going to be more important than usual, grabbing the upper hand early is key – and Bottas has done exactly that. If he can repeat the feat this weekend, the pressure on Hamilton is going to start mounting. And as we’ve seen plenty of times in recent history, when pressure between teammates becomes a factor, anything can happen.

For the last three seasons, there’s been a rather sizeable split between the top teams and the midfield, leading to the affectionate term of classing the midfield as F1.5. In 2020, that appears to have pretty much gone.

Sure, Mercedes has a decent gap to the rest, but from then on there appears to be a much more linear progression down the order. No longer is there this massive gap of clean air in the field for the top teams to drop into after their pit stops, which should make strategy much more interesting when we get races with fewer safety cars. It also means drivers are being punished harder for poor races – if Sebastian Vettel drove like this did in the last race on last years grid, he would probably have still finished fifth or sixth. This year, he was only 10th.

It also means that midfield teams can be better rewarded for a good drive – get everything right and you could finish on the podium, as with Lando Norris, whereas the main reward for a midfield team in the last few years has been sixth or seventh.

It’s much better for the sport not to come across as a two-tier championship. While the bigger teams may edge out an advantage as the year goes on, it’s nice to see 2020 at least start out close. Speaking of which…

OK, one race is kind of a small sample size and again, you’ve kinda got to discount Mercedes in this. But the rest of the field? Yeah, it’s close.

Red Bull is probably the second quickest team but in terms of race pace, it looks like Racing Point might be able to genuinely challenge them at some circuits. Qualifying is a different story, though, as McLaren looks to have the third fastest car over one lap. Despite Charles Leclerc’s epic drive in the race Ferrari looks to only be the fifth fastest – but not by much. And although Daniel Ricciardo had a tough weekend, the signs are that Renault is somewhere in there too. For any driver from any one of these teams, a tenth or two of a second could be the difference between starting a race in fourth or 10th.

It’s even close towards the back of the field. AlphaTauri doesn’t seem to have the one-lap pace but isn’t too bad in the races. Alfa Romeo seems to be in a similar position, and Williams looks like it’s going to be able to actually fight this year.

The reliability of modern F1 cars is remarkable to the point where if you get two or three car failures during a race, it’s considered quite a lot. But the Austrian Grand Prix was more like something out of the 1990s as nine of the 11 drivers all failed to reach the finish due to mechanical issues. That’s the fewest finishers since the 2015 Australian GP, where only 11 cars reached the finish – but only five of those retirements were due to failures.

Different teams struggled with different things, too. The Mercedes-powered cars had reliability concerns during testing and the violent kerbs at the Red Bull Ring played havoc with their chances – Lance Stroll had an engine problem, while both Mercedes drivers had ‘critical’ situations with gearbox sensors. George Russell lost fuel pressure, Ricciardo’s Renault overheated, Kvyat had a suspension failure, and both Red Bull’s had some sort of electrical issue. Throw in both Haas drivers having apparent brake failures and you’ve got a lot of teams left with plenty to think about before the next race.

The question is whether this was a one-off caused by the extended break and altered preparation of the teams, or a genuine concern that could play a significant part in the season?

Although the SF1000 isn’t a particularly good car in any way at the moment (apart from maybe reliability), it seems that much of that deficit has come in the power unit department. The car was a second slower in qualifying compared to last year, the slowest in the speed traps and, according to the team, seven-tenths of its lap time loss to Mercedes came on the straights.

Earlier this year, the news of a secret agreement between Ferrari and the FIA over its power units suggested that the team had been up to something a bit naughty last year which couldn’t be proved – and which the team didn’t want to divulge. That Ferrari is all of a sudden the weakest car in a straight line would indeed suggest that might be the case.

Despite all the difference this season, some things never change. Romain Grosjean had a spin. Sebastian Vettel had a spin. Teams protested each other. There was drama in the stewards office, and confusion as the stewards made a decision, then changed because of sudden new evidence. Ferrari’s performance was questioned. We had a repeat of Hamilton spinning Albon out of a podium position again, and there was even a “Valtteri, It’s James” moment on the team radio.

Most importantly, the racing was really good. The first half of 2019 was incredibly dull, which was more than made up for with a series of sensational races in the second half of the year. Thankfully, that seems to have carried over into 2020 – and the closer, more mixed-up grid is only going to help with matters. 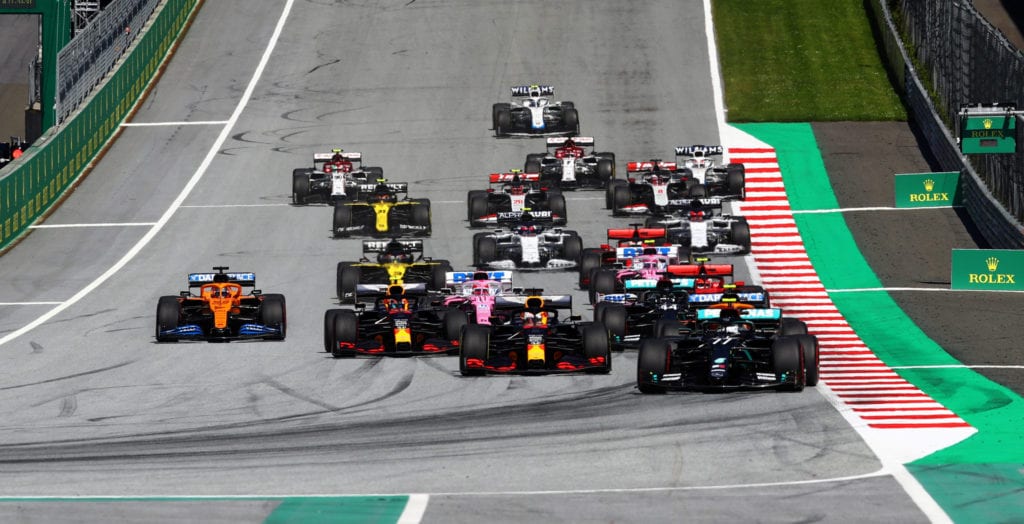