7 Things You Need To Know About The Daytona 24 Hours – WTF1
Skip to content
×
Endurance , GT

7 Things You Need To Know About The Daytona 24 Hours

It’s the Daytona 24 Hours this weekend and because a certain Mr Fernando Alonso is competing this year, there are a few more eyes on it than usual.

If that’s had a similar effect to when he did the Indy 500 and made you want to watch it for the first time, or if you’re unsure over exactly what the Daytona 24 Hours is, then this handy guide should tell you all you need to know. And if you weren’t planning on watching it all, then you should be, because it’s an incredible event. With the combination of a bumpy and narrow infield and the seriously fast banking sections, it’s an endurance race like no other.

The first endurance race at Daytona took place in 1962, though it wasn’t 24 Hours long at first. The inaugural event was just three hours long and was won by the late Dan Gurney in a Lotus 19. He won it in a slightly unusual way, too – his car broke shortly before the finish, but he had a massive lead so he simply parked it at the top of the banking and waited for the chequered flag to fall. Then, with the time limit reached, he let off the brakes and rolled down the banking to secure the win. Genius!

The race was three hours again the following year, before being upped to 2000km in 1964 and 1965; only in 1966 did it finally become a 24-hour event. It’s been that length ever since, apart from on two occasions. In 1972 the FIA felt that the only 24-hour-long sportscar race in the world should be Le Mans, so Daytona was cut down to six hours. Despite an epic battle which resulted in the Ferrari of Mario Andretti and Jacky Ickx taking victory, the reduced duration meant that spectators weren’t all that bothered about going to watch, so the following year it went back to being a twice-round-the-clock event.

The other blip was in 1974 when the distance was reduced to 0 hours and cancelled because of the oil crisis. Since then, however, it’s been a mainstay of the January/February motor racing calendar.

The late 1960s set the stage for one of sportscar racing’s most famous rivalries – Ford vs Ferrari. In 1966 Ford had finally got one over on the Scuderia at Le Mans, taking a memorable 1-2-3, and went onto win that year’s World Sportscar Championship. Everyone expected things to be the same in 1967, but the most famous racing team of all time had other ideas.

Ferrari turned up to Daytona (its first works effort in the race) with a pair of brand new and utterly gorgeous 330P4s whilst the North American Racing Team ran an older 412P. The cars turned out to not only be faster than the Fords but also more reliable.

As the opposition fell by the wayside the Ferrari’s kept on going, eventually finishing 1-2-3, many, many laps ahead of anyone else. To rub it in on Ford’s home turf, for the last half an hour, the three cars drove around nose-to-tail at nothing like full speed, before crossing the finish line together to take one of Ferrari’s most iconic victories ever. So great was the victory that Ferrari’s road car, the 365GTB/4, was nicknamed the Daytona.

Looking through a list of Daytona winners is like looking through a list of the who’s who of motorsport. As well as American endurance racing legends such as Hurley Haywood and Scott Pruett (both of whom share the record for outright victories with five), plenty of F1 names have been victorious too. Pedro Rodriguez, Dan Gurney, Phil Hill, Mario Andretti, Jacky Ickx, Martin Brundle and many others have all won. Juan Pablo Montoya has been especially successful at Daytona, winning on three occasions. He’ll be going for a fourth this year too, driving for Team Penske.

And then there are the current F1 drivers who make up this year’s grid. Of course there Fernando Alonso, who’s teamed up with Phil Hanson and McLaren reserve Lando Norris in the United Autosports team. Williams tester Paul di Resta is also racing, as is Lance Stroll, who’ll be tackling the race for the second time having competed in 2016. Will any of these join the illustrious list of winners? With such a competitive field it’ll be tough but who knows – anything can happen in endurance racing.

The 50-strong grid of cars is split into three different classes – Prototype, GT Le Mans and GT Daytona. The Prototype class features cars which are broadly similar in pace to the LMP2 cars you’ll find in the World Endurance Championship (in fact, many of the cars are LMP2s) but it also has cars called Daytona Prototype Internationals – or DPi for short. These are based on LMP2 chassis, but car manufacturers are allowed to fit them with their own bodywork and engines. They tend to be slightly quicker than the regular LMP2s (they look and sound a bit better, too – especially the Cadillac!)

GT Le Mans is basically the same as the GTE-Pro class of the WEC, with GT racers based on road-going models like the Chevrolet Corvette and Porsche 911, generally driven by professional drivers. Unlike the WEC however, the amateur GT drivers are thrust into a totally different specification of car – GT3. These make up the GT Daytona field and have models like the Audi R8 and Lamborghini Huracan that you’ll have seen you’ve ever watched the likes of the Blancpain series’, or the Nurburgring 24 Hours.

Unlike the WEC, you’ll see cars being shared by more than three drivers as the rules allow for up to five drivers to share one car, although most crews tend to go with four. There was a time when there was no limit, however, and in 1997 the winning car was shared by no fewer than seven drivers! Yeah, it’s probably a good thing it’s limited to five now.

‘But it’s a 24-hour race,’ I hear you say. ‘All the cars will be separated by laps by the end and there’ll be nothing in the way of actual wheel-to-wheel action’. Oh, how wrong you are.

Because the track has an unusual layout which is narrow, bumpy, and fast, there are always plenty of incidents which end up bringing out the safety car (or caution periods, because America). And because it’s an American event there are caution periods for seemingly relatively minor things, all of which combines to keep cars running together on the same lap and makes for some exciting action.

Take the finish of the 2016 race, for instance, when the two Corvette teammates in GTLM found themselves spending the final laps battling for victory and crossing the line side by side:

Or this controversial finish in last year’s race which saw the two leaders make contact with just minutes to go:

The racing invariably ends up being mega from start to finish. With 20 cars in the prototype class this year, the fight for outright victory is set to be as close as it’s ever been.

It seems silly to say, but this is one race where you really don’t want to try and watch all of it because you’ll just get tired and fed up. Unless you’re a seriously hardcore fan, I suggest picking out a few key points of the race – the first and last couple of hours (obviously), as well as the time around sunset and sunrise, which always look spectacular. Obviously, if you’re really into it then keep watching, but don’t feel bad if you want to go and grab a few hours sleep here an there, because it’s easy enough to drop in and out of.

On that note, don’t try and follow everything at once (again, unless you’re a seriously hardcore fan). Instead, pick out a few cars in each class (like Fernando’s, obviously) and follow what they’re doing. In doing so, you’ll gain more of an understanding of what’s going on with everyone and probably end up enjoying it a lot more than if you tried to follow all of it.

The last thing you want is to have been awake for 24 hours straight, hopped up on coffee and energy drinks and beyond tired, only to realise you spent more time trying to work out what was happening rather than, you know, just sitting and enjoying the racing.

As part of the triple crown of endurance racing with Le Mans and the Sebring 12 Hours, Daytona is a legendary event in its own right. However, it’s also the opening round of the WeatherTech SportsCar Championship – IMSA’s own version of the WEC.

If there’s a modern championship out there that races on better circuits I’d love to know what it is. The series mixes gruelling endurance events like Daytona and Sebring with shorter sprints held at some of North America’s most amazing circuits, like Road America, Mosport and Laguna Seca. There are even a couple of street circuits – honestly, you haven’t lived until you’ve seen someone muscle a big prototype around somewhere like Long Beach.

It’s a longer season than the WEC too with 12 races on the calendar, some of which are limited to certain classes. On top of that, within the season there’s a sort of mini-championship called the North American Endurance Cup. This combines the long races of Daytona, Sebring, Watkins Glen, and Petit Le Mans into their own series of iconic events which typically see larger, more international grids than the shorter races. So, if you enjoy Daytona and can’t wait another year for more of the same then don’t worry, because IMSA has you covered!

If you’re going to watch the race then it’s pretty easy to do so as the whole thing is being shown live and uninterrupted online here. The cars head out on to their pace laps at 14:30 local time (GMT -5) on Saturday 27 January, finishing 24 hours later (obviously).

Will you be watching? How do you think Fernando is going to get on? Let us know in the comments! 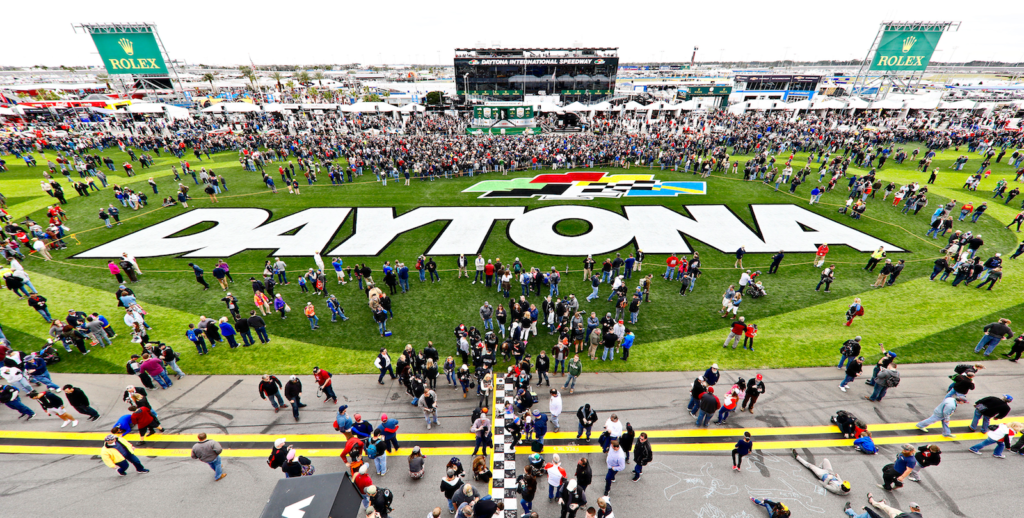