First started back in 1998 as Formula Nissan, it became Formula Renault 3.5 from 2005-2015, and for the last two years has been known simply as Formula V8 3.5. The 2017 season was it’s last, though, with Pietro Fittipaldi being the series’ 20th and final champion.

Although it hasn’t given us much in the way of massive talent in the last couple of seasons, for a time it was probably the feeder series for Formula 1 – yup, even more prestigious than GP2. Loads of brilliant F1 drivers have come up through its ranks over the years – here are eight of the best.

Back in 1999, the ‘Euro Open by Nissan’ (as it was known then) was still pretty similar to the Spanish Formula Renault championship it was born from. That meant plenty of Spanish drivers, races mostly set in Spain, and 2.0-litre engines.

Not many big names were competing in the series back then (unless you consider former Jordan driver Giorgio Pantano a big name), but there was one chap competing who went on to become fairly well-known – Fernando Alonso.

It was his first season racing cars and though there were loads of retirements, when he did finish he was generally first or second, which was enough for him to win the championship. On top of that, he’d impressed enough to get an F1 test with Minardi at the age of just 18.

Now called Formula Renault, Robert Kubica moved into the series in 2005 and absolutely smashed it. He won four races as he cruised to the title: even the legendary Markus Winkelhock couldn’t match him.

Kubica tested for Renault at the end of the year before BMW Sauber snapped him up. By the end of 2006, he was an F1 driver.

Vettel debuted in the series a few rounds into the 2006 season and impressed instantly by finishing on the podium in his first race and winning his second.

He had a pretty bad weekend in the next race at Spa when he almost had his finger severed in an accident, and with his F1 commitments with BMW Sauber ramping up, that was it for his 2006 FR3.5 season.

In 2007 he was back and comfortably led the championship until he was called up to replace Scott Speed at Toro Rosso. Despite missing 10 of the 17 races in FR3.5, amazingly he still finished fifth in the championship!

Three Red Bull Junior drivers who raced in FR3.5 in 2010. Brendon Hartley started out the season but was dropped due to poor results, with Jean-Eric Vergne replacing him and almost instantly getting wins and podiums.

The other driver was Daniel Ricciardo in his rookie year in the category, who was a championship contender all season long. He was looking good to win it in the final round in Barcelona, but with just a few laps to go his title rival (and former Red Bull Junior himself) Mikhail Aleshin overtook him and clinched the crown.

Ricciardo raced in most of the 2011 season too, but by now was busy doing Friday drives for Toro Rosso before he got his F1 race debut with HRT.

After a couple of reasonably successful years in GP2, Jules Bianchi headed to FR3.5 in 2012 and found himself in a three-way battle for the title with Robin Frijns and Sam Bird.

Things were finely poised in the final race of the season and as Bianchi was making his way up the order, Frijns was slipping down it, and it all ended in quite a bit of controversy after Frijns tried this… shall we say ‘optimistic’ lunge on Bianchi.

With Bianchi out and Bird not featuring at the front, it pretty much gave Frijns the title. The following season it was Jules who made it to F1 with Marussia, though, and he was on course for a promising career until the tragedy of that soaking wet day at Suzuka in 2014.

Stoffel Vandoorne raised plenty of eyebrows when he won the opening round of the 2013 FR3.5 season from pole – his first race in the championship.

He went on to win three more races that season and was a comfortable runner-up to fellow McLaren junior driver Kevin Magnussen. They’re both in F1 now, sure, but it’s probably fair to say that at this point, Vandoorne has slightly brighter future ahead of him…

Until the superlicence points system made the series kinda redundant, Red Bull usually preferred to put its junior drivers in FR3.5 rather than GP2. So after a season in GP3 in 2013 (as well as the odd FR3.5 race), Carlos Sainz Jr moved into the series full-time in 2014.

He had a reasonably comfortable run to the title too, and despite failing to score at all in the final two race in Jerez still beat runner-up Pierre Gasly (who didn’t win a race all season) by 35 points.

Despite rumours of making a switch to F1 with Caterham during the season, it wasn’t until 2015 when he got the Toro Rosso seat alongside Max Verstappen.

Did you really think we’d forget Lord Pastor in this list?! Maldonado raced in the championship in 2005 and 2006, and in typical fashion, there was plenty of controversy.

In 2005 at Monaco he failed to take notice of warning flags for an accident up ahead and struck a marshal, causing serious injury. He was given a four-round ban and on top of that, was banned from racing in Monaco for life.

That would have pretty much spellt the end of his single-seater career, however his family offered to pay for the recovery costs of the marshals back injury and the ban was overturned.

The following year, he would have actually won the title had he not been disqualified from first place for a technical infringement in one of the races. Things never were straightforward with Pastor… 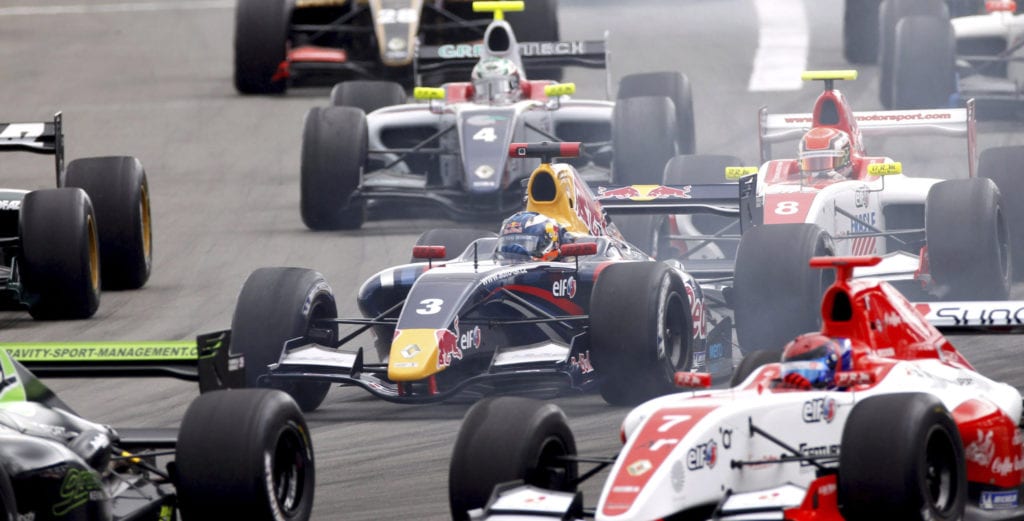