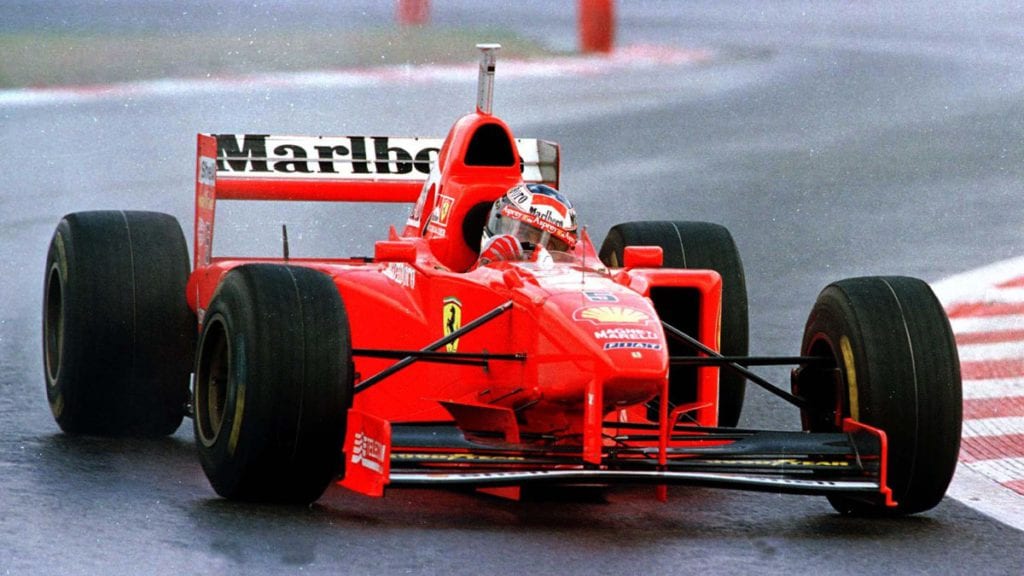 Schumacher won lots of races at lots of circuits. His eight wins at Magny-Cours is a record for a driver winning at the same circuit, but if there’s one place where Schumacher became synonymous with success then it’s Spa-Francorchamps.

With six victories there he’s won at Spa more than any other driver (it would have been seven, but he was disqualified from the 1994 race) but it’s not necessarily the numbers that impress. It’s the way he drove in the races, coped with the typical Spa weather, and often found himself breaking or setting records there. 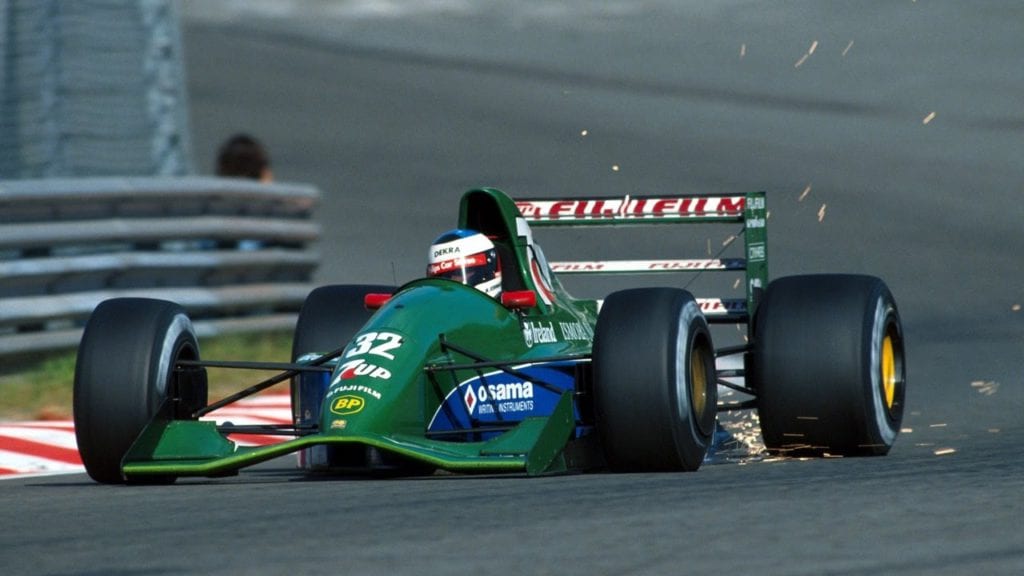 When regular Jordan driver Bertrand Gachot was imprisoned for spraying a taxi driver with tear gas, Schumacher was called up as his replacement and made a serious first impression. Despite never having driven the circuit before, he managed to qualify a stunning seventh, three-quarters of a second quicker than his experienced teammate Andrea de Cesaris, who had qualified 11th.

In the race Schumacher’s clutch broke on the first lap and he was out. De Cesaris meanwhile came incredibly close to winning the race before his engine blew three laps from the end – if Schumacher had made it to the end, might he have won on his debut? Who knows. Either way he’d impressed enough for Benetton to swoop in and steal him from Jordan for the next race at Monza. 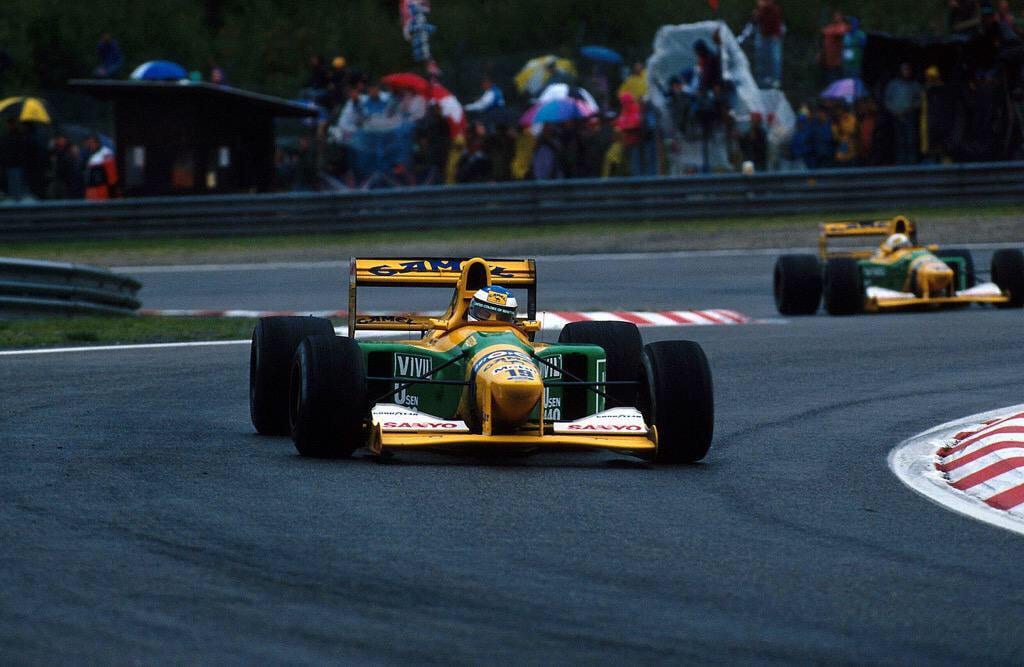 Schumacher quickly established himself as a quality driver in 1992, taking a string of podiums and regularly mixing it with more established names. A year on from his debut race at Spa he put in the kind of intelligent performance he would become known for.

Much of the race was wet and as the track began to dry out, Schumacher ran wide at Stavelot, dropping him behind teammate Martin Brundle. Schumacher noticed that Brundle’s tyres were beginning to blister so he immediately jumped in the pits and switched to slicks, the first driver to do so.

Even though he instantly started lapping way quicker than everyone, it would be a further three laps before the leading Williams duo came in, and by then it was too late; Schumacher was in the lead. Nigel Mansell started to close but his charge was halted by an exhaust issue and he dropped back. That didn’t stop Schuey from pushing though, as he charged on to seize his first win in emphatic style. 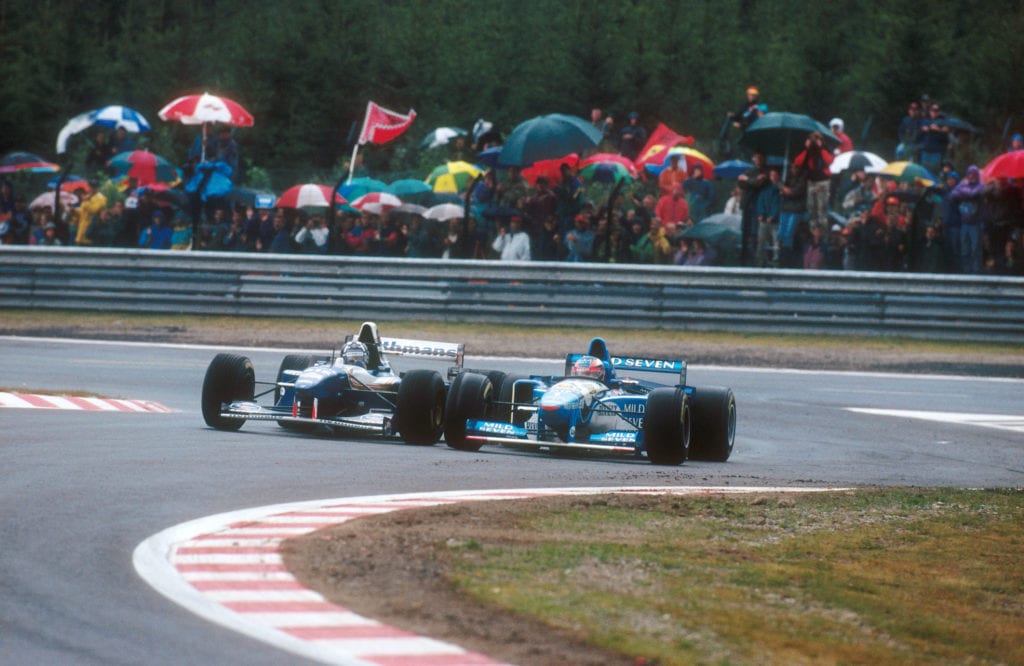 In qualifying the rain came down before Schumacher could set a representative time, leaving him way down in 16th on the grid. In the race he quickly made progress into the top six when it started to rain. Damon Hill pitted for wets but Schumacher elected to stay out on slicks in the hope that the track would dry out, feeling it was the only way he could beat his title rival having started so far back.

Although Hill was some six seconds a lap quicker, when he came up behind the Benetton he simply couldn’t find a way past and for four laps Schumacher stayed ahead. Hill got past when Schumacher ran wide at Les Combes but it didn’t matter, he’d done enough. By the next lap his slicks were working better than Hill’s wets and he was soon back in the lead.

A late safety car closed the pair up again, but any chance of seeing the two battle for the win ended when Hill was hit with a penalty for pit lane speeding and Schumacher took an improbable victory.

It was typical Schumacher – not just for his excellent car control on the wrong tyres in slippery conditions, but for the controversy surrounding his defensive driving. Hill felt he’d been forced off the circuit on more than one occasion and the stewards agreed – Michael was given a suspended race ban, though his win stood.

The first three laps took place behind the safety car, and by the end of lap four (the first racing lap) Schumacher was running where he started -in third place. By the end of lap five, he wasn’t only in front, but he was leading by 5.8 seconds. On the next lap he was 16.9 seconds ahead, and 22 seconds ahead the next time by. At the end of lap eight his lead was 28 seconds, and by lap 12 – after just nine racing laps – he was ahead by a full minute!

A couple of laps later he stopped for slicks and essentially cruised to the line to win by ‘only’ 26 seconds but it didn’t really matter, because he’d done all the hard work in those early laps. It was one of his very best drives.

After all the chaos of the massive pile up at the first start, things were a little more sedate when the 1998 Belgian GP finally got underway again.

Hill led the early stages but on lap eight Schumacher hit the front and began to drive much as he had done the previous year. He was looking unbeatable again as he built up lead of almost 40 seconds by lap 24, but then he came up to lap David Coulthard.

DC slowed to let Michael by, but foolishly did so on the racing line and in the immense spray, Schumacher didn’t see him and slammed right into the back of the McLaren, ripping a wheel off and putting him out of the race. Once back in the pits an incensed Schumacher stormed down to the McLaren pits and accused the Scot of trying to kill him.

The DNF severely hurt Schumacher’s championship challenge, though he was so much quicker than everyone that day he’d have probably still been on the podium if he’d carried on with three wheels! 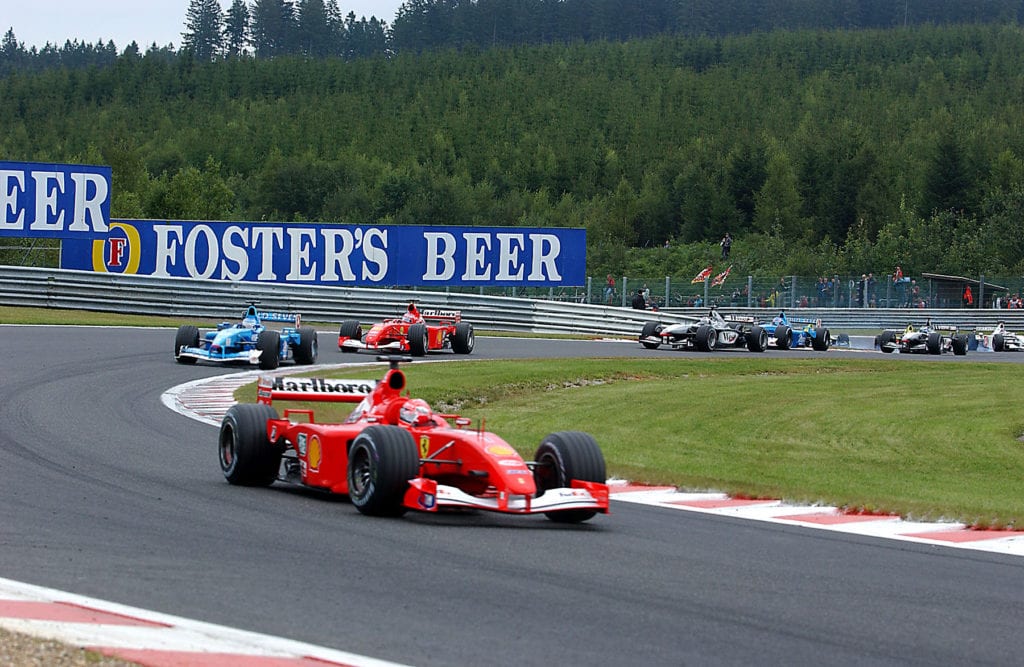 At the previous round in Hungary, Schumacher equalled Alain Prost’s number of four championships. At Spa – 10 years on from his debut – he took his 52nd Grand Prix victory, usurping Prost’s record for the most wins.

The two Williams of Juan Pablo Montoya and brother Ralf Schumacher might have given him a hard time in achieving it at Spa, but following a nasty accident for Luciano Burti which caused a red flag both fell by the wayside, leaving Michael to take a comfortable lights-to-flag victory. 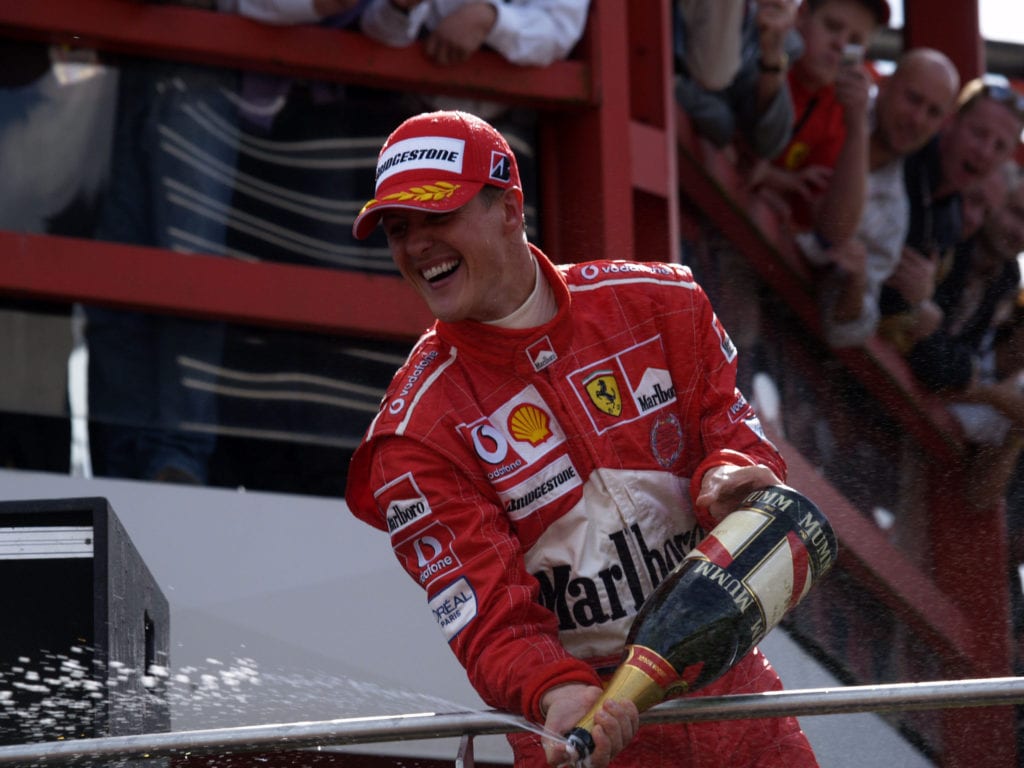 Despite winning 12 of the first 13 races in 2004, Schumacher couldn’t make it 13 from 14 in Belgium thanks to another master of Spa, Kimi Raikkonen.

It was a crazy race which had six different leaders and three safety cars, but Michael brought his Ferrari home in a somewhat muted second place to secure his seventh championship. Though he’d never win another, it’s perhaps fitting that he won his final one at Spa. 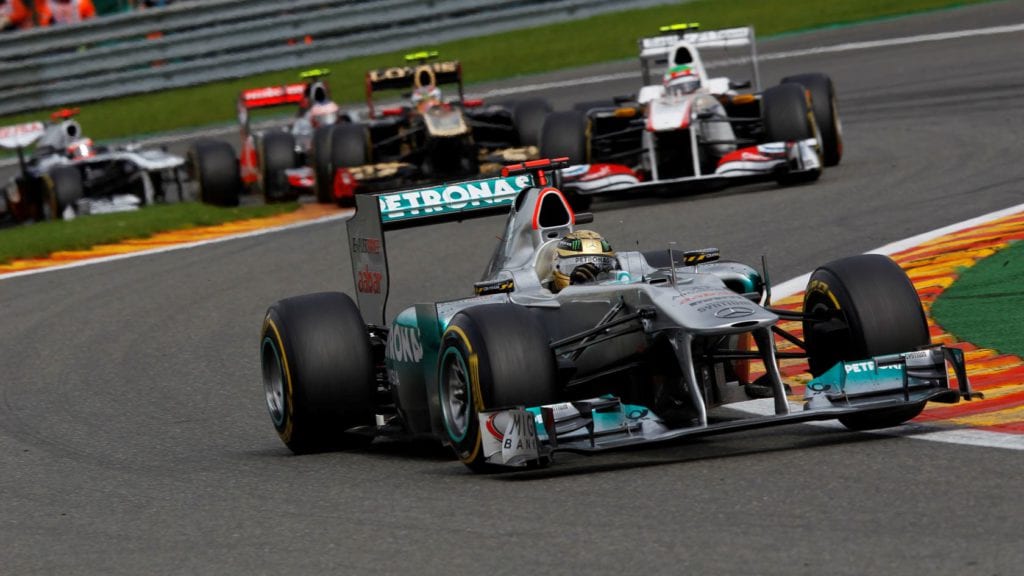 In his three comeback years Michael showed glimpses of the driver who’d dominated the early part of the 21st century, but it never really reflected in the results. There were still a few special drives though, one of which – of course – came at his old stomping ground of Spa-Francorchamps.

In qualifying a wheel broke loose before he could set a time, leaving him starting 24th and dead last on the grid. He had a quite sensational first lap however and gained 10 positions, and by lap 13 was running in the points.

He continued to make progress and three laps from the end he passed teammate Nico Rosberg for fifth place, where he stayed until the end. It was an amazing performance to not only recover so brilliantly but to also beat Rosberg, who’d started fifth and lead at the end of the first lap.