It goes quickly, doesn’t it? After all that time waiting over the off-season, the car launches and the first two pre-season tests have come and gone in the blink of an eye. Here are some highlights and memorable moments from the last couple of weeks.

Red Bull blew us all away when the RB14 launched with an awesome digital blue camo livery. Was this the livery we’d see the team use for the whole season? Well, no, but we at least expected to see it during testing.

Unfortunately, when Daniel Ricciardo rolled out of the garage on the first day the RB14 was clad in its normal race livery. Sure, it’s still a good-looking colour scheme, but where was the camo? Why would Red Bull go to all the effort of launching the car in a livery that was only going to be used for one day?

One theory is that Ricciardo’s crash during the shakedown at Silverstone damaged too many parts for the team to use the digital blue camo in Barcelona, but who knows. It’s a shame we didn’t get to see more of it but Red Bull looked to show good pace in testing, opening up the possibility of a three-way fight at the front this season – and when it comes down to it, that’s what we all really want to see, right?

Eight days of pre-season testing is already a pretty limited amount of time for the teams, but eight was reduced to just seven when the Circuit de Barcelona-Catalunya was draped in a blanket of snow during the first test.

It made for some pretty pictures, but the terrible conditions cost pretty much all the teams an entire day of running. At least Fernando Alonso could see the funny side, though.

Car is performing well in the snow so far. P1 in the morning session 👌🏻 pic.twitter.com/Gx16EgwhDE

The snow day, plus cold and wet conditions throughout much of the first test led to a proposal to add an extra day of testing. Eight teams were in favour but two teams weren’t, and with unanimous approval needed, it didn’t happen. Boo.

The Halo hasn’t really given any cause for concern yet, which isn’t really surprising. In fact, apart from Kevin Magnussen (who’s still really, really against it), the drivers don’t really seem to care too much about it anymore.

However, Pierre Gasly found an unusual issue. Drivers now have to get in and out of the car in a slightly different way thanks to the positioning of the Halo and whilst sliding himself in and out of the cockpit, Gasly snagged his race suit and ripped a hole in it.

One of the big stories of testing has been McLaren. Even though it’s shod of the Honda engines which were the source of all the team’s problems of the last three years, McLaren has still been encountering reliability issues. And not just with the car, but with the practice pit stops, too. As well as this wheel mix up, on a separate occasion the car fell off of the rear jack. Oh dear.

On the plus side, the MCL33 has been showing some fairly decent pace – nothing that looks likely to challenge the front-runners, but certainly better than we’ve seen in the last few years. If it wants to capitalise on that and rise to the top of the tight midfield battle, though, it’ll have to cut out things like the embarrassing pit stop fails and reliability gremlins.

Of course, you could excuse McLaren’s woes as issues brought about by having a new engine supplier, but the Toro Rosso-Honda partnership has actually been one of the surprises of testing. During the first test Toro Rosso actually completed more laps than any other team, and at the end of the two weeks, only Mercedes and Ferrari had more mileage under their belts. The pace wasn’t bad either.

But the absolute highlight of Toro Rosso has to be the increasing saltiness of its social media. The spoof FAQ it put out before the season was great, but was totally blown away by the incredible ‘Woking’ ‘typo’ in this tweet, which definitely, totally, honestly wasn’t aimed at McLaren in any way.

Although he’s desperately trying to prove that he’s ready for promotion to a race seat, Robert Kubica elected to give up his own scheduled seat time on the last day to Lance Stroll. That’s because Stroll missed a lot of running time thanks to the weather and car problems, so Kubica decided himself to surrender the final morning to the Canadian, missing out on gaining vital experience of the car and tyres for the good of the team.

All the focus is on the top three teams, but the midfield battle for fourth was also looking seriously good this year. Could Force India retain its ‘best of the rest’ status? Would Renault continue its fight up the field? Where would a resurgent McLaren fit in?

One team that was probably overlooked was Haas. But the team raised eyebrows with some brilliant laps late on in testing suggest it could not only comfortably be the fourth-fastest team, but even challenge the top three. Magnussen was the sixth fastest driver across the whole of testing, despite ‘only’ using the supersoft tyre. Then again, considering how similar the VF-18 is to last year’s Ferrari, perhaps the speed isn’t such a surprise after all…

The combination of softer tyres and a resurfaced track is always going to result in lower lap times, but even so, Sebastian Vettel’s lap on the penultimate day was seriously quick. His 1:17.182 ended up being the fastest time in testing, some one-and-a-half seconds faster that Kimi Raikkonen’s best time from testing last year and a new, unofficial track record.

Does that mean Ferrari will be the team to beat this year? Well, maybe, but Red Bull is looking strong and Mercedes hasn’t properly shown its hand yet. In other words, it’s testing, we can get an idea but we don’t really know, and we’ll have to wait until Melbourne to find out. The same as every other year, then! 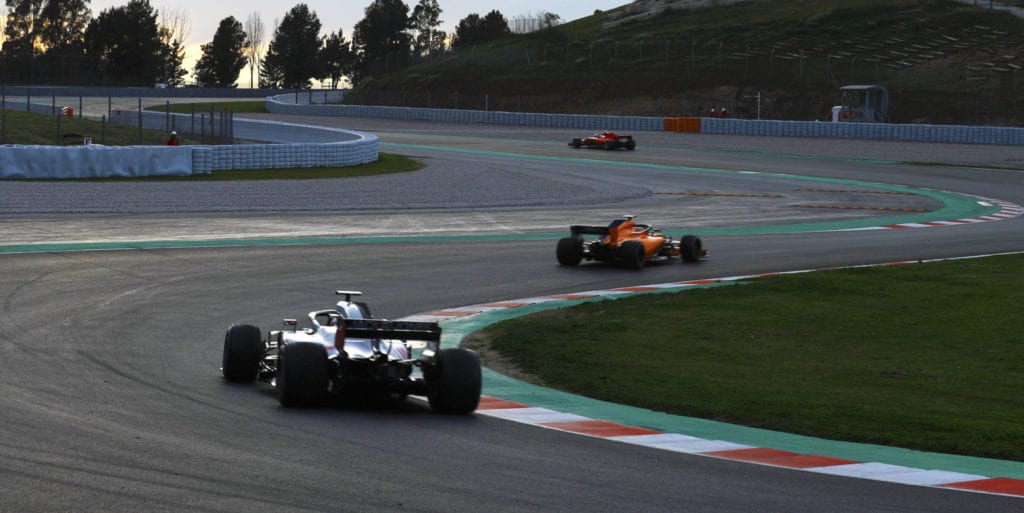