30 years after it was last involved with the sport, Alfa Romeo is back in F1 as a technical partner for the Sauber team. It’s great news because Alfa has a massive history in motorsport, so to see the brand officially back at the top level just feels right, even if it’s currently little more than a marketing gimmick.

After starting out as a dominant force in F1, Alfa left for a bit, then came back as a patchy midfield team that could never really get it together. There have been plenty of memorable moments along the way, though.

When the Formula 1 World Championship was created back in 1950, plenty of manufacturers got involved, but Alfa was the only one that was properly prepared. It still had some old cars knocking around from before the Second World War which, after some updates, proved to be pretty much untouchable.

Giuseppe Farina won the first championship race in F1 at Silverstone on 13 May in 1950 and went on to claim the drivers’ title too. In fact, Alfa won every race that year (barring the Indy 500) and would have won the constructors’ title too – if it had existed back then…

the following year Alfa had stiff competition from Ferrari – mainly because the car drank petrol like it was going out of fashion – and the team ‘only’ won four of the seven races it entered. Three of those were with Juan Manuel Fangio at the wheel and he duly took his first world championship.

Despite the success, Alfa decided that it didn’t fancy spending the money needed to build a new car and withdrew from the sport at the end of the year.

Alfa Romeo didn’t entirely disappear though. A few privateer teams occasionally used Alfa engines in the 1960s and early 1970s, but it wasn’t until 1976 that it made a full-on return, supplying engines to Bernie Ecclestone’s Brabham team.

The flat-12 engines were very powerful but also heavy and unreliable, and the large size made it difficult to implement ground effect to the chassis. To combat this, Brabham designer Gordon Murray came up with the BT46B, better known as the fan car. The massive fan sucked the car to the track – technically illegal, but it skirted the regulations because the team said it was a ‘cooling device’.

In its one and only race at the 1978 Swedish GP Niki Lauda dominated, but after backlash from other teams the car was withdrawn from subsequent races. The car had given Alfa its first victory since 1951, however, and the non-fan-equipped version won at Monza later that year.

Whilst Brabham was growing frustrated of being limited by the Alfa flat-12, Alfa Romeo itself was thinking ‘yes, that’s a good engine, let’s try building the rest of the car as well!’ and in 1977 started work on a full F1 return.

The result was the very weird-looking Alfa 177, which after plenty of testing and development problems didn’t actually make it onto the grid until mid-way through 1979. It was a good car though – or at least, it would have been if it had been raced three years earlier. Ground effect had come a long way since Alfa started the 177 project and, like Brabham, the flat-12 was hindering it.

Before the end of the year Alfa already had a replacement, the much better 179, which had a more ground effect-friendly V12.

In its first full season since it returned to F1, Alfa was pretty competitive – when the car was working, anyway. The 179 was fast but unreliable, as Bruno Giacomelli dramatically found out in the last race of the season at Watkins Glen.

After taking the only pole of his career, Giacomelli shot off into the lead and comfortably stayed there for more than half the race – but then his car stuttered to a halt with electrical failure. Typical…

Although Alfa secured the services of Mario Andretti for 1981, it wasn’t him that scored the team’s best result – that would be Giacomelli, who once again had a storming drive in the final race of the year.

He was running near the front of the first race at the Caesars Palace circuit in Las Vegas until he spun, dropping right down the order. From then on he managed to fight his way back through to third and was just a few tenths away from taking second away from Alain Prost’s Renault.

Andrea de Cesaris was Alfa’s most prolific podium scorer since the marque’s return to F1. He was third at Monaco in 1982, and in 1983 grabbed a pair of second places at Hockenheim and Kyalami in the gorgeous turbocharged 183T.

One of his best drives actually came at Spa (a track he was always good at) in 1983, though. He made a mega start from on the grid third to grab first by turn one and comfortably stayed there until his pit stop.

Now pit stops weren’t exactly lightning fast back in 1983, but even by the standards of the day the Alfa mechanics were comically slow and de Cesaris dropped right back. He made he way back up to second a few laps later, but before he could mount a challenge on Prost’s lead, yep, you guessed it, the car failed.

Although 1983 had been a decent year, the turbocharged era wasn’t good for Alfa Romeo. The engine was underpowered, overweight, thirsty, and unreliable, and Riccardo Patrese even went as far as to say that the 185T used in 1985 was the worst car he’d ever driven.

Even so, he probably didn’t hate it enough to want to see his car destroyed in this fiery crash with Nelson Piquet at Monaco. He wouldn’t have to put up with it too much longer though, as the car was so bad that Alfa resorted to its 1984 car for the second half of the season – a season which would turn out to be Alfa Romeo’s last as a works team in F1.

Alfa continued as an engine supplier for a bit, with Osella using them until 1988. It used them in 1988 too, but Osella wasn’t exactly a capable team and Alfa refused to allow their name to be associated with it and so they were just badged as Osellas. There was also a deal for Ligier to use the engines in 1987, but in testing Rene Arnoux kept publicly saying how crap it was, so Alfa cancelled the deal. Not as patient as Honda were with Fernando Alonso, then… 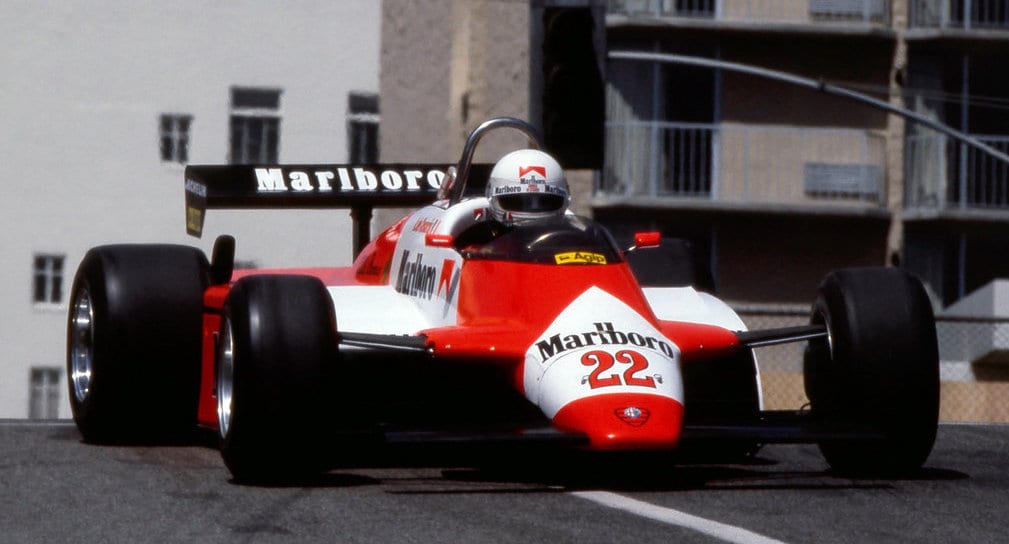