8 Of The Most Costly Teammate Collisions In F1

Rule number one of motorsport: don’t hit your own teammate. It still happens from time to time though and whilst it’s never a good thing, when it potentially costs the team a good result it stings just that little bit more.

In the Azerbaijan Grand Prix that’s exactly what happened to Force India when Esteban Ocon and Sergio Perez got together, costing the team a potential podium finish – or possibly even more. Here are eight other teammate tangles which spoiled really good results for the team.

Yeah yeah, it’s the obvious one, so let’s get it out of the way first. McLaren teammates and title rivals Ayrton Senna and Alain Prost had become bitter rivals as the 1989 season progressed and it all came to a head at the penultimate round in Suzuka.

Senna was fighting to keep his championship hopes alive and with just seven laps to go he was behind the Frenchman. He decided to launch his car up the inside at the final chicane from miles back. It was one of his typically aggressive maneuvers which effectively left the car ahead with a choice to make – let me past or we’ll both crash. To everyone’s surprise, Prost chose the latter option and simply closed the door on his teammate.

With both cars out Prost would be champion, so he nonchalantly climbed from of his car, satisfied that he’d done enough. Senna got going again and recovered to win the race, but was controversially disqualified for cutting the chicane when he recovered and so Prost was champion.

McLaren weren’t exactly averse to winning, but the feud that had developed between the two drivers had cost the team another 1-2 finish. Not that Alain will really have cared about that – he was off to Ferrari the following year…

With Michael Schumacher sidelined following his leg-breaking accident at Silverstone, the Austrian Grand Prix was the perfect opportunity for Mika Hakkinen to build up a solid championship lead.

It was all going well enough to start with – he took off from pole and led through turn one, but teammate David Coulthard fancied a go at stamping his own authority on the title race.

Going into turn two the Scot had a half-hearted look up the inside, but succeeded only in spinning Hakkinen around, dropping the Finn right to the back. From then on he put in a storming drive to recover to third place, but Coulthard couldn’t hold onto the lead he’d barged his way into and ended up losing the win to Eddie Irvine.

The 2010 Turkish Grand Prix was something of a thriller, as both Red Bulls and both McLarens fought closely for much of the race.

Mark Webber was leading from his teammate Sebastian Vettel in an effort to win his third race on the bounce, but the relentless pace at the front meant fuel consumption became an issue. Webber had to switch to a fuel-saving engine setting and on lap 40 Vettel took advantage, drawing alongside and attempting a pass for fearing of losing out to the chasing Lewis Hamilton if he also backed off.

However Vettel misjudged how far ahead of his teammate he’d got and jinked to the right too soon, making contact with Webber and spinning himself out of the race. Webber lost the lead and had to pit to change his front wing.

Although many saw the crash as clearly being Vettel’s fault, the team seemed reluctant to blame him leading to suggestions of favouritism in the team. One thing’s for sure – the incident had cost the team a probably 1-2 finish.

After making a bit of a sluggish start Juan Pablo Montoya dropped behind his Williams teammate Ralf Schumacher at the start of the 2002 United States Grand Prix at Indianapolis. Just two laps later however he was back ahead, having got a good run off of the banking and down the long pit straight.

Montoya looked to be ahead as he braked around the outside, but Ralf got on the kerb and span, hitting his teammate and causing him to skip across the grass.

Ralf lost a couple of laps as he pitted for repairs, whilst Montoya dropped down to seventh. He recovered to finish fourth but a podium had definitely been on the cards. And if he hadn’t lost the time at the start he might have been able to put the Ferrari’s under a bit more pressure, meaning Michael Schumacher might not have orchestrated that farcical finish…

Nico and Lewis weren’t exactly the friendliest of teammates and they made contact on more than one occasion during their three years battling each other for the championship.

But the worst of all came in the fifth round of 2016 at Barcelona. Rosberg snatched the lead at the start but was in the wrong engine mode coming out of turn three, which gave Hamilton a run at him. Hamilton went for a gap which Nico had already committed to closing, the pair hit each other, and both Mercedes were out of the race.

Arguments raged about whose fault it was and Hamilton apparently almost quit the team as a result. Max Verstappen won the race to become F1s youngest ever winner but it was one that should have belonged to Mercedes.

Jordan had built a decent car for 1997 and had two very talented young drivers. Three races into the season the team was on course to score an impressive double podium finish…until Ralf speared Fisi out of the race, anyway.

They were in second and third when Ralf went for a gap that wasn’t really there. The contact punted Fisichella around and out of the race, and to rub salt in the wound for the Italian, Ralf carried on to finish third in what was only his third Grand Prix, although the team weren’t too happy. They didn’t stand on the pit wall to celebrate when Ralf crossed the line, and some in the team felt that without the collision a win might even have been possible. Oh Ralf…

Both BAR drivers were running just outside of the points at Hockenheim in 2000, but the crazy part of the race was about to begin. With 14 laps to go the safety car pulled in and it started to rain – the perfect set of circumstances for a midfield team like BAR to capitalise and score a strong result.

Any chances of what could have been a rare double points finish for the team were ended however when Zonta simply drove into the back of Villeneuve in turn one. After a series of impressive spins Villeneuve recovered, but could only finish eighth.

Zonta did nothing to improve the mood of the team in the rest of the race. He was one of just a few drivers to stay out on slicks in the rain – which for Rubens Barrichello was a race-winning strategy – but he lost any hope of points for the team when he spun off and out of the race. Not that it would have mattered, because he’d been given a penalty for passing under yellow flags. Perhaps unsurprisingly BAR sacked him at the end of the year.

Alex Caffi was having great race at the US GP in Phoenix for the Scuderia Italia team. At one point he’d run as high as second and was looking good to score a big chunk of points for the team when he came up to lap his teammate, Andrea de Cesaris.

Lapping someone – especially your teammate – should be simple, right? Not when that person is de Cesaris! Caffi tried to slot past him but de Cesaris simply turned in and put his teammate straight into the wall. Andrea carried on to finish eighth and when asked about the clash he claimed he just hadn’t seen Caffi.

De Cesaris went some way to making it up to his team by finishing third at the next race in Canada, but for a small team like Scuderia Italia those few points Caffi was denied would have been a big deal.

Ok so this one isn’t F1, but it’s too funny not to include. iSport drivers Timo Glock and Andreas Zuber locked out the front row in qualifying for the GP2 feature race at Magny-Cours in 2007 but barely made it past the start line before they managed to hit each other. Just…how?

All laughter at the bizarre tangle quickly ended however as E.J. Viso was lucky to escape a frightening crash a few corners around the lap. Thankfully he escaped with just a concussion and some bruising, which means we can now look back on the Glock/Zuber crash and have a good old giggle. 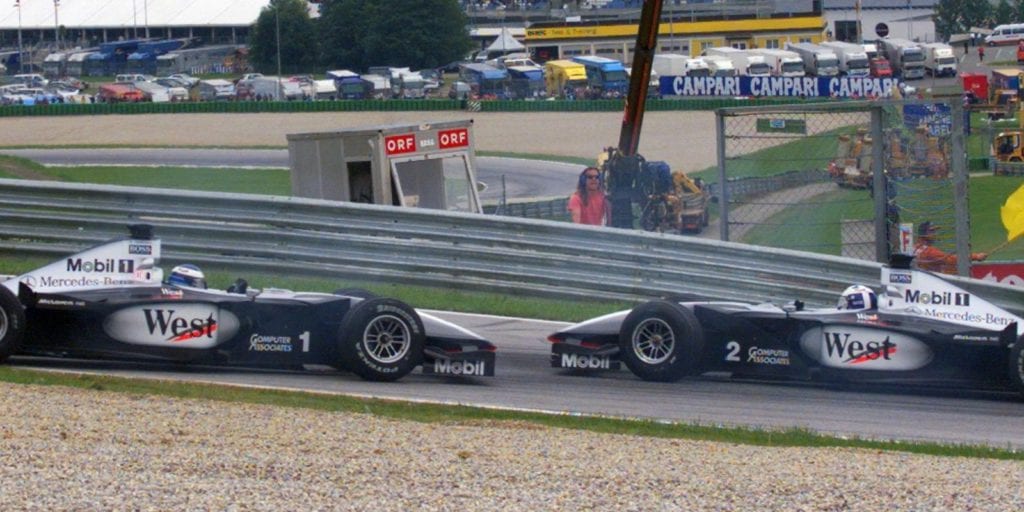