8 Of The Most Memorable Montoya Vs Schumacher Moments

It didn’t take Montoya long at all to assert himself as a front-running F1 driver. His speed, aggression and determination earned him legions of fans during an era when Schumacher dominance was putting many off the sport. Montoya was one of the few drivers able to take it to Schumacher on a regular basis and that meant that on more than one occasion, there were fireworks between the two. Here are some of their most memorable moments.

Montoya joined Williams in 2001, fresh off the back winning the CART championship in 1999 and the Indy 500 in 2000. He was obviously quick, and in his third race in Brazil gave everybody a graphic demonstration of the fact.

At an early safety car restart, he didn’t just overtake Schumacher – he bullied his way past. And despite his car being fat with fuel on a one-stop strategy, he pulled away and looked set for an incredible victory – until Jos Verstappen ploughed into the back of him after being lapped, anyway.

Montoya led the early stages of the Austrian GP but was struggling with his brakes. That gave Schumacher a run on the way up to the second corner, but did Montoya make it easy? No, of course not.

The Colombian eased off the brakes to protect his positions, but only succeeded in running himself and the Ferrari off the road.

After all the chaos at the start with Ralf Schumacher’s crash, Montoya and Schumacher ended up doing battle for the lead after David Coulthard went off at the safety car restart.

Montoya held on for a bit, but Schumacher eventually found a way past and went on to win whilst Montoya ended up a distant second.

The worst penalty in the history of F1? It has to be up there. At the first corner, Montoya tried to go around the outside of Schumacher. He left plenty of space, but Schumacher hit the side of the Williams, knocking Montoya off the track and breaking Schumacher’s front wing.

It was clearly Schumacher’s mistake – or at least a racing incident – but who got the penalty? Montoya. He recovered to finish a distant second with Schumacher third and Ralf winning. After the race, even Schumacher felt Montoya’s penalty was wrong. It’s no wonder there were claims of the FIA favouring Ferrari…

Towards the end of the race, Montoya was reeling in Schumacher for second place. He went for a move around the outside of the Dunlop corner at the bottom of the hill, only for a similar thing to Malaysia 2002 to happen.

Montoya carried on to finish second as Schumacher ended up beached in the gravel. He was pushed free by the marshals and went on to finish fifth. Thankfully, unlike Malaysia, this time there were no penalties – Schumacher even admitted the spin was his own fault.

A chaotic opening lap saw Montoya attempt an outside move on Schumacher at Tosa, only for Schumacher to force him onto the grass. Montoya then returned the favour to Ralf, all of which led to a bit of heated discussion in the press conference.

One of the most bizarre incidents of 2004 happened between these two in the Monaco tunnel. During a safety car period, Montoya ran into the side of Schumacher, putting the Ferrari out of the race.

Was Montoya not paying attention? Should Schumacher have been warming his brakes so aggressively in the tunnel? Stewards decided nobody was to blame, so chances are it was probably a bit of both.

At Spa in 2004, the Ferrari’s were struggling to get heat into their Bridgestone tyres. After an early safety car, Montoya took advantage of this with a glorious move around the outside of the Bus Stop chicane. 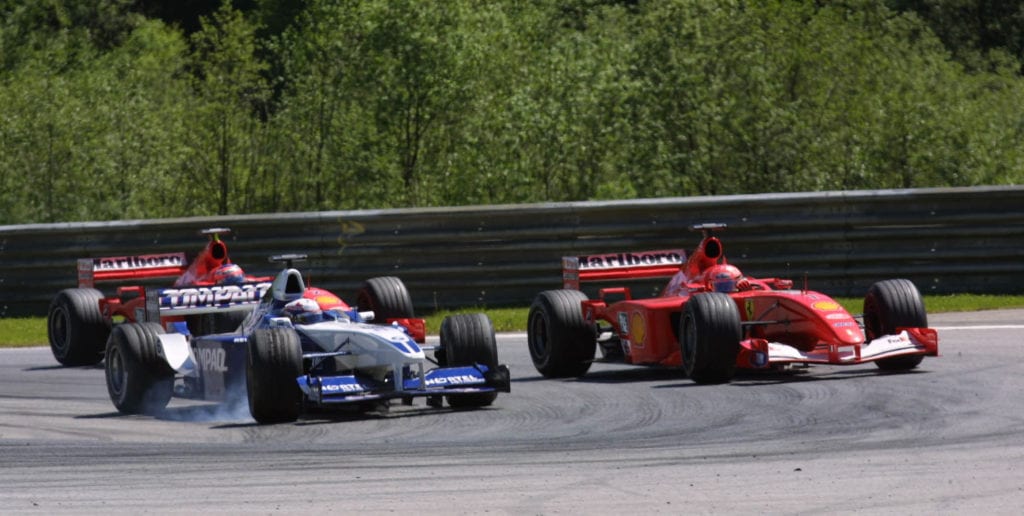