Last year it was the Indy 500, last weekend it was the Daytona 24 Hours. Now he’s not only doing Le Mans, but the entire World Endurance Championship season for Toyota on top of his Formula 1 activities. Add in a bit of karting during his free weekends and one thing is clear: Fernando Alonso has an insatiable appetite for racing.

But where’s he going to stop? When he’s won another title? When he’s won the triple crown? Maybe he’ll never stop! With that in mind, here are eight classic motorsport events which he’ll surely have to compete in (and win) if he wants to achieve his self-stated goal of becoming the greatest racing driver of all-time.

Being successful in rallying would surely be a necessity for someone looking to try their hand at racing everything. And when it comes to rallying, few events are as outrageous as the Dakar Rally. One of the most gruelling motorsport events in the world, the two-week long event requires a certain amount of bravery, something Alonso has in bucketloads.

Given that Carlos Sainz won this year’s event at the age of 55, it’s something Fernando could have years to try and win, too, whether he tried his hand at the car, bike, or truck class. Since it takes place in early January it’s not like it’ll clash with anything else, either.

Fernando has recently said he wouldn’t mind a go at Nascar, so why not go straight for its most prestigious event, the Daytona 500? Oval racing is totally different to circuit racing and although he got to grips with the Indy 500 pretty quickly, Nascar is a step further still.

He’ll surely appreciate being able to drive flat out without having to worry about running out of deployment or more powerful cars blasting past him since everyone will spend the whole race in long lines going roughly the same speed.

Once he’s got to grips with Nascar, perhaps he should take a step closer to grassroots American racing and try figure-8 racing? And not figure-8 like Suzuka is a figure-8, but a short circuit with an actual crossover. Yes, this really is a motorsport that happens, the pinnacle of which is a three-hour long endurance event.

One of Alonso’s many strong points is his ability to almost predict where cars are going to go, so avoiding a load of cars every few seconds for three hours should be the perfect examination of his abilities.

Fernando’s rapid rise through the ranks to F1 meant he missed out on competing in perhaps the most prestigious junior formula event of all – the Macau GP. You only need to look at last year’s event to see how much everyone wants to win it, so why wouldn’t Alonso want to do the same?

OK, it’s meant to be for young drivers, but last year a 50-year-old guy simply known as ‘Dragon’ entered, so there’s a precedent for really cool veterans to give it a go. Fernando is pretty good at race starts, too, and the massive long run down to the first braking zone would give him every chance to gain fistfuls of positions if he qualified badly or something.

One of the many things that made John Surtees great was his success on both two and four wheels. But instead of trying to do something as simple as winning the MotoGP title or World Superbike Championship, Fernando should go straight to the top and tackle the legendary Isle of Man TT.

Alonso is a pretty fearless chap (after all, have any other drivers gone wheel-to-wheel with Pastor Maldonado for the lead of a grand prix?!) so lapping the 38-mile course millimetres from walls and hedges at outrageous speeds should be all in a days work for him.

Winning Le Mans is a tough ask whatever the situation, although for Alonso, being in the lead car of the only manufacturer LMP1 team should elevate his chances slightly – as long the bad luck both he and Toyota seem to suffer from cancel each other out.

If he finds 24 hours at Le Mans too easy then he’ll need to go and try the 24 Hours of LeMons. Think navigating traffic at 3:00am at over 200mph is tough? Try racing against literally hundreds of cars, all driven by complete amateurs and none of which cost more than 500 bucks. Then we’ll see what Fernando is really made of.

If Fernando gets a bit fed up 24-hour races, then there is a 12-hour race out there which is known for being just as challenging, bumpy, and car-breaking as any of the classics like Daytona or Le Mans – no, no the 12 Hours of Sebring, but 12 Hours of Lawnmower racing. Forget the British GP, this is the jewel in the crown of the British motor racing season.

Why wouldn’t he want to sit on a modified garden mower and race around a muddy, bumpy field, right through the night? Some say that Formula 1 is just one step on the ladder to lawnmower racing, and every F1 driver dreams of competing in it one day. Probably. The likes of Ayrton Senna, Michael Schumacher, Jim Clark, and Juan Manuel Fangio never won it, so if Alonso could win it…well, he’d be the greatest ever, surely?

This would surely be the greatest challenge of all. Held during the iconic Goodwood Revival meeting, the Settrington Cup does away with frivolities like engines or complex aerodynamics in favour of a pedalling setup in cars so small that teams have to enlist children to race them.

Fernando’s size would probably mean the cars would need to be altered somewhat and come the race he’d have a significant weight disadvantage, which would make this the toughest of all events to win. For that reason he’d better start soon – he’ll need years of experience before he can even think about going for victory.

What races would you like to see Fernando have a go in? Let us know in the comments! 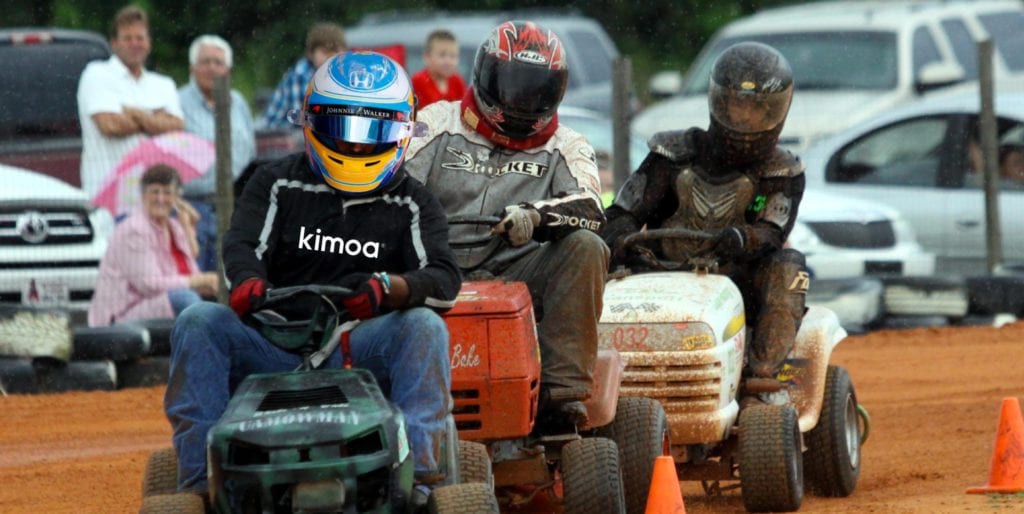