There’s a reason why the Indy 500 is called the “greatest spectacle in racing” and that was well and truly proved once again with the 101st running of the event.

It was another thrilling, action-packed race at the Indianapolis Motor Speedway, in front of packed grandstands and enthusiastic crowds.

The race was so damn good for a number of reasons, let’s wrap them up:

A lot of fresh eyes were on the Indy 500 because of one man: Fernando Alonso. The two-time Formula 1 champion opted to bin the Monaco GP from his calendar and take on a new challenge. It’s safe to say the hype around Alonso’s Indy 500 debut was absolutely huge.

Media coverage of practice and qualifying increased massively, likewise with the race, and there was a whole new focus. Sure, at times it was a bit much (there were 32 other drivers taking part, after all) but it was awesome to see so many new people taking an interest and – ultimately – falling in love with oval racing.

There are few race tracks where single-seater race cars can battle down straights five-wide, or tackle corners side-by-side at over 220mph. The Indy 500 is a tricky one to complete but the nature of oval racing, especially in IndyCar, means there’s always close racing and on-track scraps to keep track of.

In fact, almost every lap there was some overtake or intriguing fight to keep an eye on. We saw some delightful, dramatic and close battles for position and overtakes on track – rookies may think it looks easy, but passing another car takes serious skill in IndyCar.

The length of the Indy 500 and characteristics of oval racing mean there’s always a time where unexpected or lesser-known names find themselves at the front, and that was no different in 2017. Who’d have thought ex-F1 star Max Chilton would be in content for victory right at the end, and James Davison – replacement for Sebastien Bourdais – also spent a few laps out front.

Speaking of drivers hitting the front of the pack, the 2017 event featured a new record for the most drivers to lead the race, with 15. Imagine that number of leaders in a F1 or WEC race? Absolute madness.

The field was so competitive, it was hard to pin-point who the contenders were for victory until the last few laps. Of those who led the race, guess who’s lap tally was the highest? Chilton. No, we’re not joking. He was really quick and came close to getting a top three result.

With drivers speeding around the IMS at well over 200mph, any crash is going to be pretty huge. Shunts are all part of the entertainment in motorsport and this year’s Indy 500 featured one of the biggest we’ve seen in ages, when Scott Dixon’s car went airborne after contact with Jay Howard.

The safety of the Dallara DW12 was proven once again, with both drivers escaping unharmed. The race also included crashes for Conor Daly, Buddy Lazier and a big multi-car pile-up in the closing stages, which brought out a late caution.

With so much focus on Alonso’s fortunes at the Indy 500, it was pretty ironic (and also massively disappointing) that the McLaren F1 driver retired with just over 20 laps to go with a Honda engine failure – he was probably thinking he’d escaped all of that. Alonso was running seventh at the time and had a storming first half of the race, regularly leading. It wasn’t to be this time round, but he’s promised to return.

A late caution meant there was a sprint to the chequered flag, with Chilton, Takuma Sato, Helio Castroneves and Ed Jones proving to be the lead contenders in the final lap. Sato hit the front with five to go, with Castroneves trying as hard as he could to get by. It was thrilling to watch such a frantic and dramatic race go down to the wire.

But it was Sato who emerged ahead at the finish line to claim his first Indy 500 win, becoming the first Japanese driver to do so. The former Super Aguri F1 star came close to victory in 2012 before crashing on the last lap, so it was an even more special and important result for Sato – the commentators in Japan went crazy for the result too.

On track, Sato can be a bit feisty and sometimes that causes incidents, but there’s no denying he’s incredibly quick – he was fast all through the ‘Month of May’ and off track, no one ever has a bad word to say about him. It was a popular and well-deserved result for Sato, and quite a way to win it as well.

Those were just a few of the main reasons why this year’s Indy 500 was so good, a lot of other things – such as strategy, cautions and unreliability – also played a big part in the race and shook up the order. After a fairly processional Monaco GP, it was just what motorsport needed on Sunday. 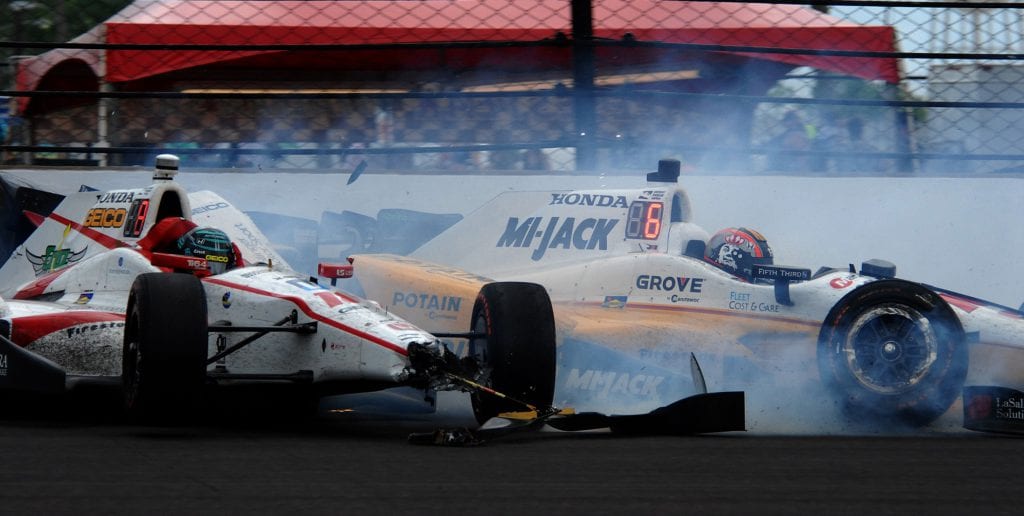