8 Reasons Why You Need To Watch IndyCar This Year

Last year we were all hyped up for IndyCar because Fernando Alonso was competing in the Indy 500. And rightfully so, because it’s an incredible event. If that made you interested in IndyCar and you kept on following it, great! But if your interest in America’s top-line single-seater series didn’t last much longer than Alonso’s Honda engine at the 500, then you’re missing out.

Not to worry though, because the new season starts soon – very soon. On 11 March, 24 cars will (hopefully) take the green flag at the St. Petersburg street circuit in Florida, kicking off what is shaping up to be an incredibly exciting season. Here’s why you should be watching.

In recent years IndyCar has been criticised for the somewhat ‘unconventional’ looks of the car. This year, things are different. It’s still the same Dallara DW12 that’s been in use since 2012, but gone are rear wheel pods and manufacturer aero kits, replaced with a sleek, retro body that’s the same for everyone, and harks back to the glory days of the late 1990s.

Sure, looks are subjective, but you’ve gotta say that in road or oval form, the new car is one mighty fine looking machine. A grid of these charging into Turn 1 at Indianapolis or through the Carousel at Road America is going to be one hell of a sight.

Those looks aren’t just for show. IndyCar has done what many feel Formula 1 should be doing and introducing more underbody aero whilst removing many of the winglets and stuff from the upper surfaces which create dirty air.

The result? Less drag makes it faster on the straights, but slightly less downforce means slightly lower speeds in certain corners. The result is a car that produces more-or-less the same lap times as the old cars, but drivers can follow each other closer, leading to more overtaking, and they should be rather spectacular to watch. As an added bonus, the drivers are even finding the cars more fun to drive.

Think IndyCar is all about oval racing and turning left? Think again. Of the 17 races on the 2018 calendar, six take place on ovals, six on road course, and five on street courses, making IndyCar perhaps the truest test of driver abilities of any championship in the world.

Those tracks are amazing, too. The road courses include the likes of Mid-Ohio, Road America, and Barber Motorsports Park – all undulating, old-school circuits with little runoff, exactly the sort of place we’d all love to see F1 return to.

The street circuits are pretty brutal, with most places littered with horrible bumps and surface changes that are challenging enough in the dry, but can become treacherous in the wet. Yes, IndyCar does race in the wet, as long as it’s not an oval. It also still races at Long Beach, one of the most famous street circuits in the world.

And what of those ovals? They’re all different too, from the steep banking and high speeds of Texas (where races frequently descend into absolute chaos) to the colossal Pocono superspeedway, and the shorter and sweet Iowa Speedway, which isn’t even a mile long. Then, of course, there’s the big one…

Even compared to its triple crown counterparts, the Indy 500 is a bit special. Monaco frequently ends up being a bit of a disappointing procession and as good as Le Mans is, you’ve got to be committed to really follow, understand and enjoy all 24 hours of it. The Indy 500, on the other hand, is always exciting, cramming non-stop action and drama into its three hours, which is probably why it’s the largest single-day sporting event in the world.

It’s enjoyable just as a standalone race, but if you’ve been watching the season and following the stories of different drivers and teams it takes on a whole new dynamic. There’s sure to be some extra interest this year too as Danica Patrick will be using it as her farewell race.

There’s a real spread of talented drivers in IndyCar this season, with a good mixture of experienced veterans, established talents and promising youngster.

Scott Dixon is widely considered to be one of the best drivers who never made it to F1 and he’ll be challenging for his fifth title this year, which would put him a clear second on the all-time list (only A.J. Foyt has more, with seven). Other experienced former champs in the field include Will Power, Simon Pagenaud, Sebastien Bourdais, Ryan Hunter-Reay, and Tony Kanaan. Throw in a bunch of established talents (like Graham Rahal and James Hinchcliffe) and some promising rookies (Robert Wickens and Pietro Fittipaldi) and you’re looking at a series where you’d think most of the grid will feel they have a chance of winning a race, and about half who could realistically challenge for the title. They’ll have to go some to beat reigning champ Josef Newgarden, though…

We all love a good visor cam, right? Just a few laps from a practice session look amazing, but IndyCar has started to use them in races now too and yes, it’s exactly as cool as you think.

Expect to see even more of it this year. Add in the rotating T-cams that have been around in IndyCar since forever and you’re left with some of the best onboard coverage in motorsport.

Missed a race? Does your timezone make it awkward to watch it live? Is IndyCar not broadcast in your country? Then don’t worry, because a few days after each race, IndyCar uploads the whole thing onto it’s YouTube channel. That’s right – not highlights, the whole thing. So if you do miss a race, or enjoy one so much that you want to watch it again, then just wait a few days and boom, it’ll be there for you to enjoy in full.

That’s not the only great thing about IndyCar’s YouTube, either. As well as plenty of features and interviews, IndyCar also uploads a load of old races, so if you want to watch the 1987 Road America 200, you can!

I’ve saved this point for last because it’s the most important. After all, we’re motorsport fans because we want to watch close, unpredictable racing, right? IndyCar provides just that. If you’re after a series where you see cars go four-wide on an oval, run side by side through the sweeping bends of Mid-Ohio or pull off improbable lunges on a narrow street circuit, then IndyCar is for you.

Of course, it does have its boring races – every championship does – but in IndyCar, they seem to be just that little bit less common. Even those ‘dull’ races can be interesting because tyre and fuel strategy is always a factor – oh yeah, IndyCar has refuelling, if that’s something you miss from F1. Also, there’s always the chance of a caution period.which can throw a race wide open.

Cars also have a limited amount of ‘push to pass’ to use each race, which gives drivers a bit of a power boost to help with overtakes. Unlike F1’s DRS, however, drivers can also use it to defend. Add in how the new cars have been designed to aid overtaking and 2018 could end up being a bit of crazy year.

Will you be watching when the season gets underway on 11 March? Let us know in the comments. 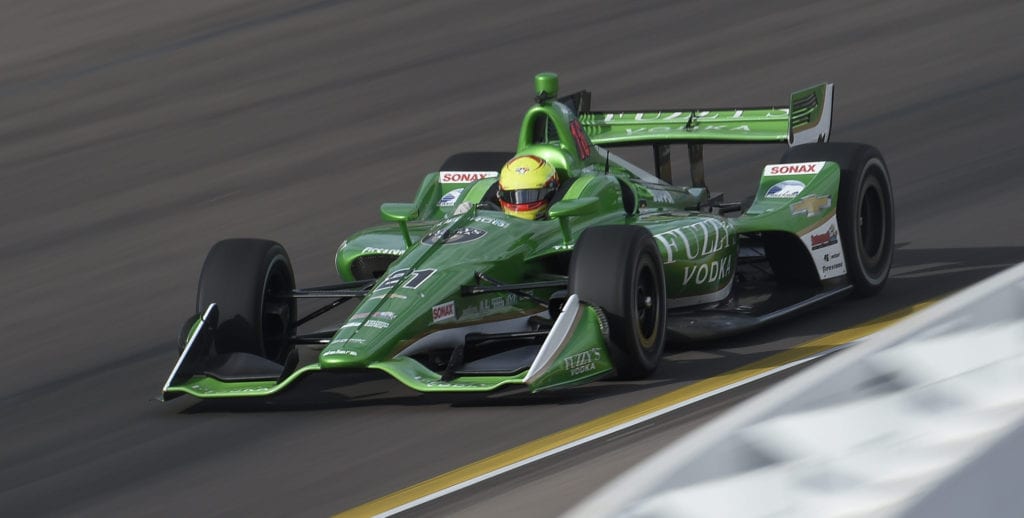