8 Reasons Why You Should Watch MotoGP This Year

The two-wheel equivalent of Formula 1, MotoGP sees the world’s best motorcycle racers compete across 19 races around the world. If you’re an F1 fan (or even just a car racing fan) it can be quite difficult to get behind the idea of bike racing because at first glance, it is very different. But to dismiss it because you don’t like bikes or because you think two-wheeled racing is too different to do yourself a disservice. Here are eight reasons why you should be watching MotoGP this year.

Trying to follow an F1 race an be tricky. Keeping track of who’s on what tyres, who needs to pit, who has the pace and who’s saving their car can be a sizeable task, but in MotoGP there’s none of that. The lights go out, the riders race, and 45 minutes later there’s a winner. There are no pit stops, no team radio, no wondering about fuel saving or overheating, or anything like that.

It makes watching MotoGP refreshing because you don’t have to have half an eye on race strategy, you can just watch and enjoy the racing at face value. And there’s an awful lot to enjoy.

MotoGP races are close. Really close. On two occasions last year there were attempted overtakes for the lead in the final corner, and the winning margin is more often measured in tenths than it is in seconds. On top of that, different riders and different bikes tend to be quick at different points of the race and even different parts of the circuit, meaning that the order frequently changes as the races evolve.

Don’t expect to see riders go side-by-side for several corners as you might do in F1, because bike racing doesn’t work like that. Instead, you’ll see battling riders constantly trying switchbacks, outrageous braking moves, and maybe even a bit of argy-bargy to force rivals off of the apex. And because bikes take longer to stop and turn than cars, overtaking moves are possible into pretty much any corner. Of course, you can have such a thing as too much overtaking, but MotoGP balances it beautifully.

It’s true of any motorsport that the driver or rider can make a difference, but in MotoGP (and all bike racing) it’s not just something you know – it’s something you can see. With no bodywork hiding them away, you can see the riders scrabbling all over the bike, you can see the different lines and techniques they’re trying, and you can see when they’re expressing their emotions.

Some conditions suit some riders better than others, too. And by that, I don’t mean that if someone isn’t confident in the rain or on a certain tyre compound they’ll finish fourth instead of first, but maybe way down in 13th or 14th. Conversely, if everything comes together, you might see someone who’s usually a midfielder suddenly up fighting for wins. That’s a rare thing in any four-wheeled motorsport, but in MotoGP there’ll be someone putting in a surprising performance in pretty much every race.

Usually, crashing is pretty black and white – you either do or you don’t. Occasionally, MotoGP riders manage to do both. Marc Marquez has become the king of it, somehow managing to totally lose control of his bike, fall off, get back on and continue without actually crashing on multiple occasions – including during last year’s championship decider.

Not every crash can be saved, however. In fact, MotoGP riders crash a lot over the course of the season and will frequently end up with some kind of injury – a broken collarbone here, a dislocation there, you know. That doesn’t mean six months off and a season ruined, though – more often than not riders will pop their shoulder back in, stick a splint on a broken bone and get back out there as soon as possible.

For instance, last year, Valentino Rossi broke his leg in a training accident on a motocross bike, yet 22 days later was back racing, where he qualified on the front row and finished fifth, less than six seconds behind race winner Marquez. For comparison, when Michael Schumacher broke his leg in 1999, he was out for over three months.

Rossi’s result isn’t just a one-off though. At many races, there’ll be someone riding through some sort of pain, or needing pain-killing injections just to get through a race. Motorcycle racing is incredibly physical, too, since riders don’t really sit down and are constantly using their arms and legs to manipulate their body weight across the bike. That’s tough enough for a fully fit and healthy person – that so many riders do so whilst nursing some sort of injury proves that they’re a different breed from other racers.

One of the criticisms of F1 is that the drivers are seen as PR robots, unable to say anything that might be seen as controversial or harmful to the team and its sponsors. In recent years that’s thankfully been changing, but it’s still nothing on how the MotoGP riders behave.

If two riders have a problem with each other, they’ll say it. During a press conference in 2015, Rossi had no hesitation in accusing Marquez of dirty tactics during their title battle – whilst he was sitting right next to him! Former rider and double champion Casey Stoner rarely missed an opportunity to stick the boot into Rossi, Jorge Lorenzo will complain if anyone overtakes him in a slightly aggressive way, and Cal Crutchlow has never sat on a fence in his life.

They’re also expressive on the bike, to the point where they had to ban riders from making rude gestures whilst out on track. It’s not all sniping and negative comments though – Because they’re all so outspoken it won’t take you long to get to know who’s who and which riders you like, and that’s absolutely a good thing.

The amount of talent at the front of the current MotoGP field is verging on the ridiculous. Of the riders with the most premier class wins since 1949, four of the top 10 (Valentino Rossi, Jorge Lorenzo, Marc Marquez, and Dani Pedrosa) are currently racing. Rossi is an all-time great (perhaps the all-time great), Lorenzo can be untouchable on his day, Marquez is well on his way to breaking every record in the book, and Pedrosa is the most successful rider ever to never win a title.

You’d have to think all of them are in with a genuine shout of the championship this year too, as are Andrea Dovizioso and Maverick Vinales. That covers the entirety of the factory Honda, Yamaha, and Ducati teams. Imagine if we had all of the Ferrari, Mercedes, and Red Bull drivers able to fight for the title in F1 this year and you’re some way towards what it might actually be like in MotoGP this year.

That’s not all, though, because there are some youngsters in the form of Johann Zarco and Alex Rins who could easily upset the applecart – and if they don’t do it this season, they probably will in the near future. We’re currently in the midst of what is sure to go down as one of the truly legendary eras of motorcycle racing.

Like F1 has with Formula 2 and GP3, MotoGP has a couple of feeder series in Moto2 and Moto3. Unlike F1, these categories race at every round and have full world championship status. Some riders make most of their careers in these without ever moving up to the premier class, and quite often the racing is…well, bonkers.

Moto2 is admittedly a bit hit and miss. The bikes sound great and they slide around spectacularly, but races can get a bit spread out. Moto3? That’s where the real action is at.

Both Moto2 and Moto3 also feature all of the positives MotoGP does – simple racing, talented grids, tough riders and close championships. Basically, each weekend you get three 45-minute races which are pure action from start to finish – what’s not to like? The first round of the 2018 season gets underway on 18 March in Qatar. Will you be watching? 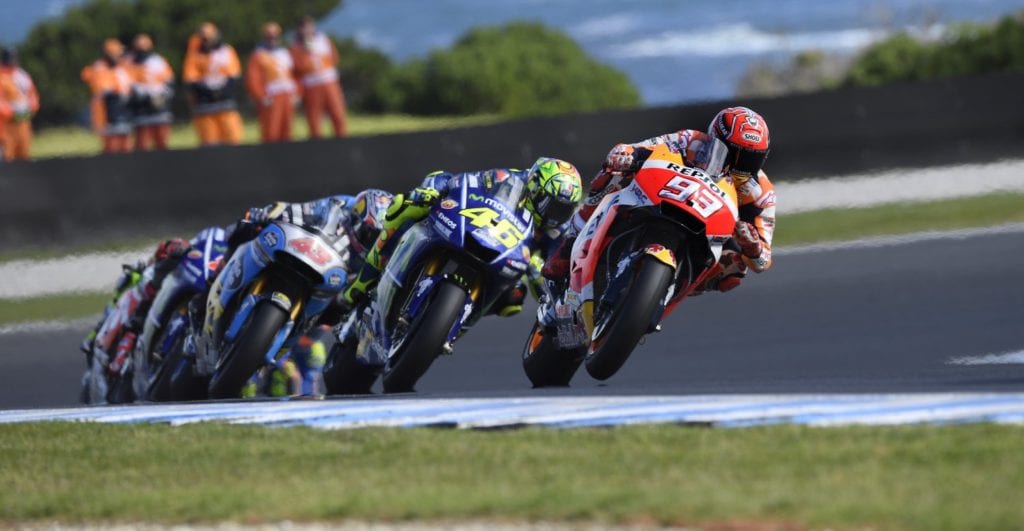