8 Things That Could Replace A Rained Off F1 Session – WTF1
Skip to content
×
Formula 1 , Fun

8 Things That Could Replace A Rained Off F1 Session

It sucks when sessions get red-flagged because conditions are too bad, and surely the time spent waiting for them to improve could be much better used. And when sessions get cancelled the people who miss out the most are the fans, so giving them some kind of entertainment should be a priority.

Here are eight things we reckon would go some way to lessening the pain of not seeing F1 cars on track.

Who is the fastest driver in F1? It’s almost impossible to tell when they’re actually driving because the cars are all different, but pit them against each other in a sprint down the pit lane and we’ll soon find out who the quickest is.

Some pit lanes are really long as well, so it’ll be a great test of fitness. And if it’s wet it’d be interesting to see if any of the drivers at the back gamble on switching to dry or intermediate compound shoes in an effort to gain an advantage.

Some championships fill the gaps between sessions by putting on some sort of display on the circuit. Whether it’s a stunt team or a demonstration run of some old cars, it’s definitely better for the fans than just staring at an empty track.

The World Series by Renault did this very well when that was a thing, with ex-rally ace Jean Ragnotti often putting on a great show for the fans.

Occasionally a driver or two will venture out to meet the fans, but if track running is suspended so badly that it’s going to be a while before they get back out on track again, then why not have all the drivers head out to meet fans around the track?

For some fans getting an autograph or a selfie with their favourite driver would almost make them glad the session was cancelled, as well as making them feel they were more of a part of the sport.

You know when the track is so wet that the safety car has to go out and do a lap to check the conditions? It’s not entirely exciting, so why not take the opportunity to put some of the drivers in it?! They could make it a bit of a competition and time their laps.

Or they could take the medical car and fill it up with three or four of them and have one of them broadcast from inside on Facebook live or something. There’s no way that wouldn’t be hilarious.

Every team could put a car in the pit lane and get the drivers to do some tyre changes to see who’s quickest at it. Even better, throw some of the team principles and TV broadcasters into the competition as well for added amusement. The mechanics practice the procedure hundreds, if not thousands of times to do it as well as they do in the races, but putting a load of inexperienced people to the test would surely be pretty amusing.

Most circuits have plenty of big screens around them so that fans can watch the action, so why not put them to use during a delay? After all, eSports is rapidly growing in popularity, and seeing all the drivers have a sim race against each other would be interesting.

Best of all though, virtual races don’t have to be cancelled because of bad conditions or because the virtual medical helicopter can’t virtually fly. There are plenty of great sims out there the drivers could use, or alternatively, just stick them all on Mario Kart and really get their blood boiling before they go out in the real cars.

Sit Kimi down in a big chair on the pit straight and give him an ice cream. One by one the drivers have to stand in front of him and each have one minute to try to make him laugh. Points are awarded based on whether he smiles, titters or full-on belly-laughs. Double points if he says ‘Bwoah’ at any time.

Anything goes, except for showing him videos of Maldonado’s crashes, because obviously that would just be too easy.

Remember when Kvyat and Ricciardo had an impromptu dance at the 2015 US GP? Of course you do, because it was beautiful. That should become a standard part of wet sessions, with all the drivers giving us their best routine and then a winner being picked by an impartial third party. Probably Nick Heidfeld, he knew how to throw some shapes.

What would you like to see happen during red flags and cancelled sessions? Let us know in the comments! 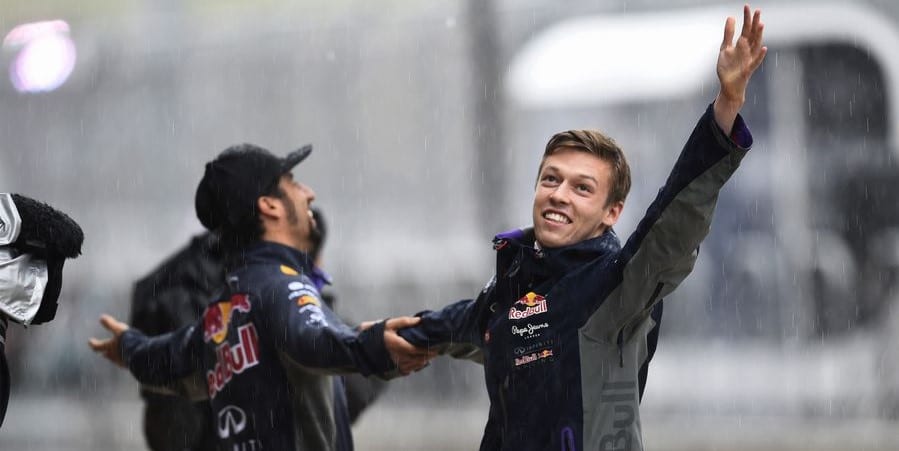