That was 12 years ago – and it’s been 13 since a Ferrari driver won a title, when Kimi Raikkonen pinched the 2007 championship. Considering that Ferrari drivers since then have included Raikkonen, Sebastian Vettel, and Fernando Alonso (three of the great drivers of this century) and Felipe Massa (who was very much a top driver before his 2009 accident), that seems unbelievable.

Ferrari is now in its second-longest title drought. The longest came in the 80s and 90s, when the team went 16 years between constructors’ titles (1983 until 1999) and a staggering 21 years between drivers’ titles (Jody Scheckter in 1979 and Michael Schumacher in 2000).

If (like me) you’re old enough to have been watching F1 since the mid-90s, then 2008 doesn’t seem like a very long time ago. But when you look at the ways the sport has changed since then, you realise that actually, it’s bloody ages.

Charles Leclerc is potentially Ferrari’s best hope of bringing an end to the team’s bad streak – and he’d only just turned 11 at the end of 2008. He was already showing the kind of promise that would lead him to becoming a Ferrari driver, though, having won three French karting championships.

As for the youngest driver on the 2020 grid, Lando Norris? He was only eight when Ferrari last won a championship.

OK, so Lewis Hamilton was probably the most remarkable rookie in F1 history, almost winning the title in 2007 and then securing it in his second season. And for Vettel, 2008 was the end of his first full season, which had seen him pull off an astonishing win at Monza for Toro Rosso.

For comparison, Ferrari has only won 29 races in the same period. Even McLaren, a team which hasn’t been competitive for most of that time, has managed 20 wins…

At the end of 2008, Red Bull still had the reputation of being a bit of a party team. Adrian Newey was designing the cars, sure, but they were stuck in the midfield with only the occasional podium to really shout about – just like previous team owners Jaguar and Stewart. The fact the main team had been beaten by the supposedly junior Toro Rosso team in the championship in 2008 didn’t help with the optimism that things would get better.

In 2009 all that changed and Red Bull firmly established itself as a top team, going on to take 62 wins and a combined eight world championships so far.

Of the 22 drivers to start a race in 2008, only Hamilton, Vettel, and Raikkonen are still in F1 in 2020. Many have moved on to other championships, while six drivers – David Coulthard, Mark Webber, Nick Heidfeld, Jarno Trulli, Adrian Sutil, and Nico Rosberg – have retired from racing altogether.

Depending on when Kimi, Seb, and Lewis decided to move on, we could only be a few years away from a grid with no drivers from 2008 on it – and therefore a grid full of drivers who weren’t even in F1 the last time Ferrari won a title.

The number and identity of teams can seem like a fairly static aspect of F1, but in the 12 years since 2008, a staggering number of them have appeared, disappeared, and reappeared.

Formula 1 has changed an awful lot since 2008. It was the last year of the insane aero winglets before the simplified cars of 2009, which then became bigger, wider, and faster in 2017. The dry-weather tyres had grooves in them and were made by Bridgestone instead of Pirelli. In-race refuelling was still a thing. Crashgate wasn’t public knowledge. The cars were 141kg lighter than they are today. Engines were 2.4-litre, naturally-aspirated V8s and only had to last for two races.

And yet, through all of these changes (and many others), not one combination of rules or drivers suited Ferrari well enough for them to win a championship.

In the 1990s and early 2000s, there was all manner of licenced and unlicenced F1 games available for various platforms by multiple publishers. By 2007, there was virtually nothing. For three years, F1 fans had to be content with F1 Championship Edition (based on the 2006 season) as the most recent official gaming offering until Codemasters picked up the licence in 2009. That meant that anyone who wanted to recreate the 2008 season to try and make Massa, Raikkonen, or Kazuki Nakajima the champion instead was unable to do so.

If you want to play an F1 game and recreate a Ferrari championship victory, the most recent one you’ll be able to manage it with a copy of F1 ‘04 for the PS2 (unless you dive into the world of modding on the PC, anyway).

One way in which I like to judge timeframes is to work backwards from a moment in time and see what significant events it’s closer to than it is to today. For instance, Michael Schumacher’s F1 debut in 1991 is closer to Jim Clark’s first championship in 1963, than today is to Schumacher’s debut.

In other words, it’s been a really long bloody time since Ferrari won a title. 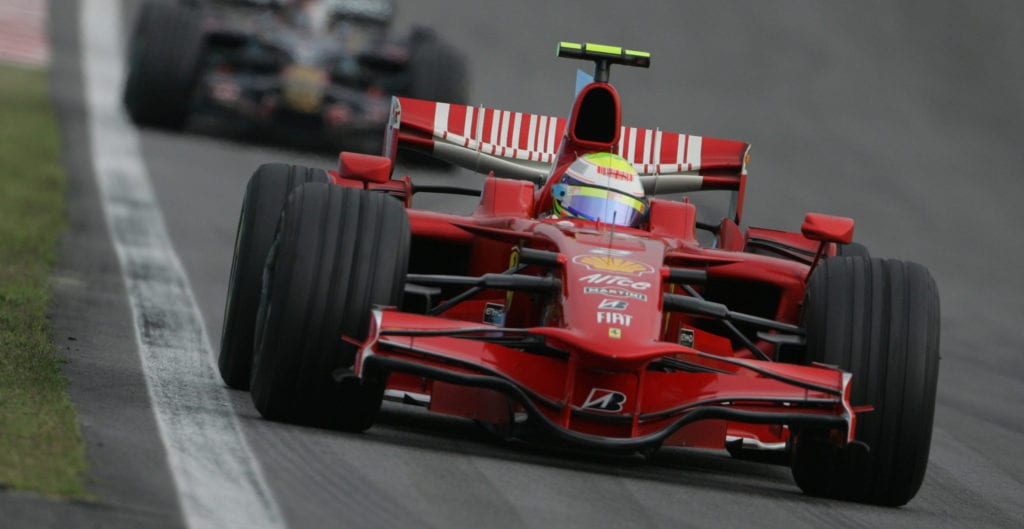