8 Times Drivers Suffered From Horrendous Reliability During A Season

McLaren-Honda has suffered from horrendous reliability in 2017, especially on Fernando Alonso’s side of the garage. In the modern era any reliability issue is very rare, which makes McLaren’s current record even more unbelievable. Yet if things carry on the way they are its drivers could be poised to join an exclusive club of drivers who suffered an utterly appalling finishing record, even in a time when a few mechanical failures were expected across a season.

Here are eight drivers who spent a season getting very used to the idea of an early shower.

The March team had a very successful 1988 season, with Ivan Capelli nabbing two podium finishes, but in 1989 was a complete disaster for the Italian.

The car itself wasn’t that bad and he managed to qualify well on occasion, but it simply wouldn’t reach the finish. In the 16 races that year his race was ended by car failure 12 times and he spun out twice. On the two occasions he did get to the end – in Monaco and at Spa – he could only finish 11th and 12th respectively.

Team mate Mauricio Gugelmin fared slightly better, even scoring a podium in the opening race, but for Capelli the season was a disaster.

There were plenty of ridiculous claims flying about for BARs first season, not least that it would win its first race. They never even got close to winning, not because the car was slow, it was just horribly unreliable.

1997 World Champion Jacques Villeneuve put in some impressive performances and could have scored points or even podiums on a few occasions, but the car just kept letting him down; he didn’t finish a race until the 12th round of the season!

His best result was an eighth place at Monza, which meant that Villeneuve (and the team) scored precisely zero points all year and finished last in the Constructors’ Championship, behind even Minardi.

Of course Andrea de Cesaris is in this list! After all, he holds the record for the most retirements in F1 history, having failed to finish 136 times from 208 starts.

1987 was a particularly bad year for de Cesaris in the Brabham team. The car was decent, but its powerful BMW engine would often expire long before Andrea got the chance to live up to his ‘de Crasheris’ nickname, as of his 15 failures to finish, only three were his own doing.

14 of those DNFs were outright retirements and at the final round in Adelaide he was classified 8th, though he span off four laps from home. The one race he did finish was at Spa and it was cause for celebration as he finished third. He had to push his car across the line though as he’d run out of fuel, so if you really wanted to you could say his car didn’t reach the finish of any races that year!

Jean-Pierre Jabouille spent much of his F1 career at Renault helping to develop the first F1 turbo engines, and even took the first turbocharged win at Dijon in 1979. The new technology meant Jabouille suffered plenty of unreliability over the years, but 1980 was by far his worst year.

He took pole in Brazil and South Africa, but finished neither race whilst team mate René Arnoux won both. Jabouille reached the end at Long Beach, albeit nine laps down, and the rest of the season was a string of car failures. Except for at the Osterreichring, where his car held together long enough to not only finish, but finish first, just ahead of a charging Alan Jones.

Jabouille didn’t get to finish the season as suspension failure in Canada left him with a broken leg and he missed the last race of the year.

Jabouille’s career was something of a strange one, as he only ever finished in the points on three occasions, and two of those were victories!

If I told you that in 1989 Ferrari never finished off the podium, you’d probably think they had a great season, but that was the problem – the car never finished! It’s revolutionary semi-automatic paddle-shift gearbox was part of what made the car so quick…and so unreliable.

Both Gerhard Berger and Nigel Mansell suffered, but it was the Austrian who suffered most (not least because of a horrible fiery crash at Imola he was lucky to escape from).

He didn’t finish a race until the 12th round of the season at Monza, when he finished second. He followed this up with a win at Estoril and another second at Jerez, which was enough for him to finish 7th in the Drivers’ Championship, despite the horrid unreliability.

Rubens Barrichello signed for the newly-formed Stewart Grand Prix team in 1997 and although the car was a solid midfield competitor, it was also incredibly unreliable.

Barrichello failed to reach the end in 11 of the first 12 Grands Prix, but that one finish was pretty special – second place in the rain at Monaco. The only other finish came at Monza, although he was classified 14th in Austria after spinning off a few laps from the end.

Niki Lauda’s final F1 season wasn’t particularly great. Whilst team mate Alain Prost romped to the title and enjoyed good reliability, Lauda could hardly buy a finish, with only one of his 11 retirements that year down to driver error.

When Lauda did reach the finish it was in the points. He was fourth in San Marino, fifth in Germany, and then took a final Grand Prix victory at Zandvoort ahead of team mate Prost before he retired at the end of the season.

Ok, it doesn’t quite fit the topic, but everyone’s favourite backmarkers suffered such spectacular unreliability when they first entered F1 that I just had to include it.

Minardi entered F1 in 1985 with Pierluigi Martini, who managed to finish three races with a best result of 8th (and last) at the final round in Adelaide. The following year Minardi expanded to two cars for Andrea de Cesaris and Alessandro Nannini. De Cesaris equalled the teams best finish by coming home eighth in Mexico, but that was his only finish all year. Nannini managed to finish twice, but was so far behind at Estoril that he wasn’t even classified, though finishing 14th in Mexico at least ensured the teams first ever double finish.

In 1987 Andrea de Cesaris left to go and break down in a faster car and was replaced by Adrian Campos. He only finished one race that year, while Nannini managed to get to the end on a whopping three occasions.

Things improved in the following years as the team switched to Ford power. The biggest reason for the teams inability to finish in those early years was the Motori Moderni turbo engine, which was not only underpowered but also unreliable. Now where have we heard that recently? 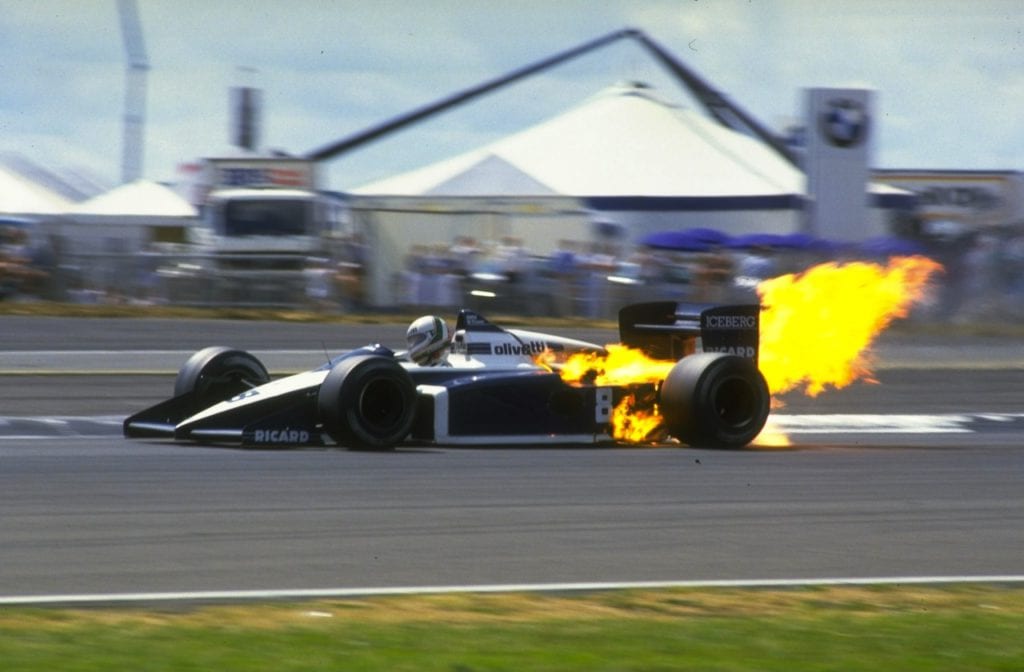