The car Damon Hill made his F1 debut with in 1992 was also the last car raced by the legendary Brabham team. Although you couldn’t miss its bright pink paint job chances are you wouldn’t see it during a race. The car only qualified on three occasions and 11 races into the season, the team folded.

Pink cars seem to be a common sight in the DTM. Before Lucas Auer and Christian Vietoris raced pink Mercs with the same sponsor that Force India now have, Susie Wolff (neé Stoddart) raced this pink Merc.

Driving for the Persson Motorsport team her best results came in 2010, when she nabbed a couple of seventh places.

The venerable Porsche 962 was raced by so many different teams for so many years that it would be weird if there wasn’t a pink one. In 1990 the Richard Lloyd Racing team had sponsorship from Japanese firm Italiya, leading to this fetching livery.

A one-car effort for most of the season with their own 962C GTi, the team added an older long-tail 962C for Le Mans which managed to finish 11th. Later in the year they managed third place in the shortened race at Montreal.

These days pink is widely associated with breast cancer awareness, and for the last few years IndyCar driver Pippa Mann has raced in the Indy 500 with support from the Susan G. Komen organisation in order to raise awareness.

In the 100th running of the Indy 500 in 2016 Mann finished in a career-best 18th position, one place ahead of eventual series champion Simon Pagenaud.

The Porsche 917/20 was an experimental car built to test parts for Porsche’s Can-Am programme. It wasn’t exactly a looker though, and its bulbous low-drag body drew comparisons to a pig.

The car was meant to have a Martini livery but after the pig comments didn’t want to see their name on what was seen as such an ugly car. Instead those zany Germans decided to paint the car pink and label it with cuts of meat, like a butcher’s diagram.

The Pink Pig only raced once, at Le Mans in 1971, and although it showed promising speed brake failure put it out of the race. I guess you could say it didn’t bring home the bacon.

There have been quite a few pink cars in Nascar, but this one is just…wow. It only ran for one race in 2010, and was part of a marketing ploy by Toyota who were running a competition where fans could design their own livery. There was even a pretty funny advert:

Because what else screams ‘Nascar’ like bunnies, baby seals and unicorns?!

This gorgeous Spice SE90C raced at Le Mans back in 1991 with the all-female crew of Desiré Wilson, Lyn St. James and Cathy Muller. Unfortunately they didn’t manage to get to the end of the race however, as an accident put them out of the race after 47 laps.

In 1978 condom brand ‘Excita’ sponsored Keke Rosberg during his campaign in Formula Atlantic. A pink car with condom sponsorship? The jokes almost write themselves.

Rosberg won three of the seven races but eventually came second in the championship, which actually must have thrilled his sponsor. 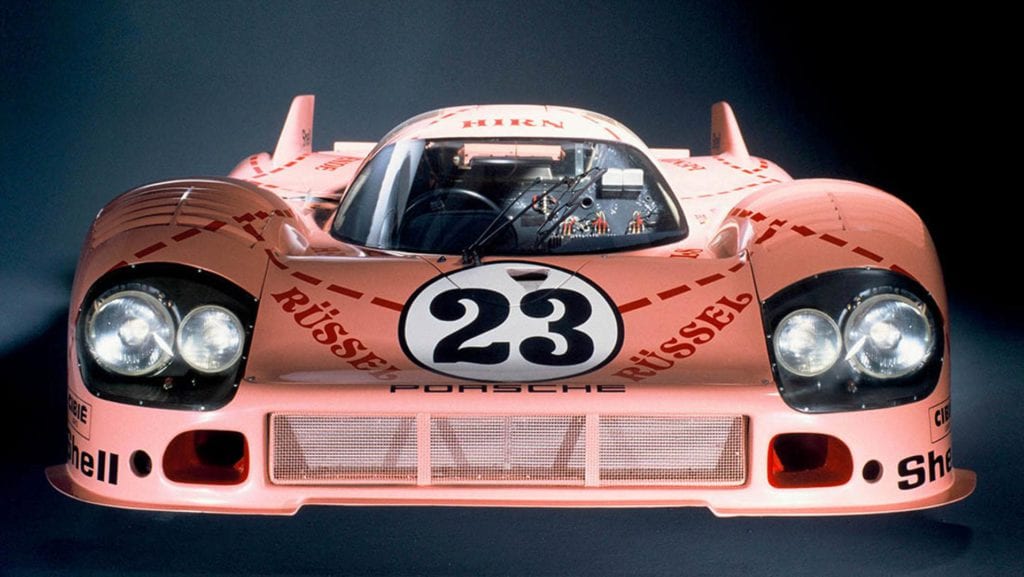