8 Times The Circuit Gilles Villeneuve Threw Up An Unexpected Result

The Canadian Grand Prix is firm favourite on the Formula 1 calendar. Not just because the Circuit Gilles Villeneuve is an old school track and has a great atmosphere, but because for some reason something weird often seems to happen in the races.

Whether it’s because of a high attrition rate or a sudden change in the competitiveness of teams, a weird result in Montreal has almost become expected. Here are eight times where that was the case.

The 2012 Canadian Grand Prix was an absolute thriller as the front runners took on different tyre strategies. In the end it was Lewis Hamilton who won after making a second stop, whilst Alonso gambled on a one-stopper and fell to fourth. He was passed by two more drivers who’d got their one-stop strategy right – Romain Grosjean in the Lotus, and the Sauber of Sergio Perez.

Perez had started from a lowly 15th place and stayed out long on his first set of tyres. When he made his only pit stop he rejoined in eighth place and on better tyres than those around him, and he used them to great effect as he charged up to third. He’d already finished on the podium that season when he was second in the wet Malaysian Grand Prix, but this was a very different kind of drive.

Proving it was no fluke he did something similar at Monza later in the year to finish second, and since joining Force India he’s also made some unusual strategies work. But at the time it was something of a surprise – just like most races in 2012!

Coulthard’s last year in F1 wasn’t particularly good, especially considering the performances his teammate Mark Webber was having – after six races Webber had 15 points, Coulthard none. But when Lewis Hamilton and Nico Rosberg ploughed into the back of Kimi Raikkonen at the end of the pit lane it set the stage for Robert Kubica to take his first (and only) win, and for Coulthard to score his final podium.

By loading the car up with fuel he was able to stay out and gain places during the long safety car period, and he kept his head as track conditions deteriorated – not only were there tyre marbles everywhere, but the surface itself was breaking up in places.

It didn’t quite kickstart his season however, and he only scored points on one more occasion (a seventh place in Singapore).

Whilst Lewis Hamilton cruised to a dominant maiden victory, behind him all hell was breaking loose. The safety car had to come out a staggering four time during the race, and Alex Wurz’s strategy of staying out long and doing a one-stopper allowed him to rise from 19th to third. Wurz was something of a master at scoring random podiums – his first came whilst subbing for Gerhard Berger at Benetton in 1997, his second one whilst subbing for Juan Pablo Montoya at McLaren in 2005, and then this final one in Canada for Williams.

But it wasn’t just Wurz driving well though, as behind him Takuma Sato was having a blinder. He’d been up and down the field all day, but in the closing laps found himself on the right tyres and was able to scythe through the pack to finish sixth for Super Aguri, the teams best ever result. It could have been even better for them though, as earlier in the race Anthony Davidson was running third when he had to pit for damage sustained from hitting a groundhog. Only in Canada!

The 1995 race was a typical Montreal race of attrition, with only nine of the 24 starters reaching the finish. Jean Alesi was one of them and he took an emotional first (and only) win, but behind him the Jordan team also had cause to celebrate – not only had both of its cars reached the end, but they’d done so in second and third, with Rubens Barrichello finishing ahead of Eddie Irvine. It was the teams first double podium, a feat they’d only achieve once more (at Spa in 1998).

There was nothing unusual about the top three finishers in the 1992 Canadian Grand Prix. Gerhard Berger won from Michael Schumacher and Jean Alesi, but the fourth place finisher was a massive surprise: Karl Wendlinger had somehow dragged his struggling and underfunded March into a solid fourth place. It was the teams only points finish all year and although it was enough to allow March to finish ninth in the Constructors’ Championship, the team folded at the end of the season.

1991 saw an attritional race in which the majority of the top runners failed to finish. Nigel Mansell wasn’t one of them however, as he’d led the entire race and looked set for victory but on the final lap, it all went wrong. As he was waving to the crowd he led the revs drop too low and his Williams stalled just a couple of corners from home, and he was out.

That meant that Nelson Piquet snatched an unlikely win for the not-that-competitive Benetton team, and Stefano Modena took his second and final career podium by finishing second for Tyrrell. Ricardo Patrese was behind him in third, but it was the Jordan team which had probably the biggest result.

Andrea Cesaris crossed the line in fourth with teammate Bertrand Gachot just behind him in fifth, giving the tiny Jordan team not only it’s first points, but a double points finish just five races into its debut season.

When Ayrton Senna retired from the very-wet 1989 Canadian Grand Prix with just a few laps to go, Thierry Boutsen was able to win from Ricardo Patrese to mark the first win for the Williams-Renault partnership. But in third place was the Scuderia Italia-run Dallara of Andrea de Cesaris – who’d run near the front all race – for what would be the Italian’s last podium finish.

It went someway to redeeming himself as in the previous race in Phoenix he’d taken out his teammate Alex Caffi whilst being lapped, when Caffi himself was potentially on for a podium. In Canada Caffi finished sixth to give the Scuderia Italia team its only double points finish in F1.

Having failed to qualify for the previous race René Arnoux managed to finish fifth by virtue of simply staying on the track to score his first points for two years, and the last of his career.

What’s so weird about Gilles Villeneuve finishing third in his home race? Well it isn’t so much the result itself, but the way he did it. The 1981 Canadian Grand Prix was very, very wet, and at around two-thirds distance Gilles made contact with Elio de Angelis and damaged his front wing.

The wing didn’t come off, but instead bent up over the front of the car, almost completely obscuring Gilles’ vision. But instead of pitting for repairs he simply kept going, despite having to try and peer around the side of this huge chunk of metal. After several laps the wing eventually worked itself loose and Gilles continued on to finish third, behind race-winner Jacques Laffite and second-placed John Watson.

Horribly wet conditions, a mediocre car, obscured vision, reduced downforce, and he still finished third. For any driver that would be unexpected, but for Gilles it was just another day at the office. 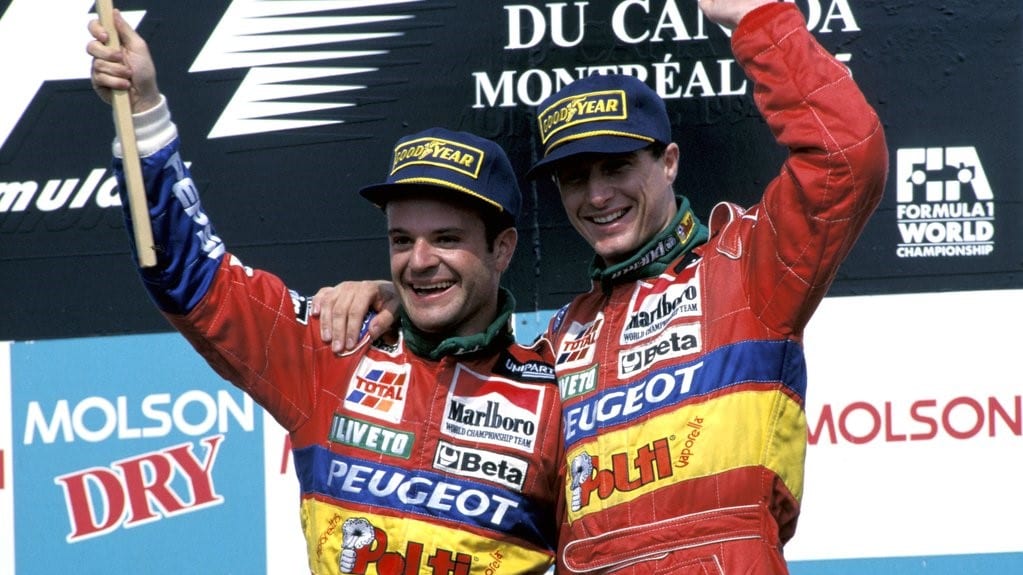