With the random news that rapper Pitbull will be co-founding a NASCAR team, we wanted to take a look back at the weirdest and wackiest collaborations of when celebrity met motorsport; and a race team was born.

Even if you know nothing about Basketball, you know who Michael Jordan is. The guy is a legend on-court and even has a footwear brand estimated to be worth billions of dollars away from the sport.

But, did you know that Jordan has a burning passion for motorsport too? He loved riding bikes but had to quit after signing his first contract after it was agreed to be too much of a liability. He still rode though, just did it discreetly and tried not to get caught—naughty naughty.

Nevertheless, back in 2004, Jordan was approached by racing team boss Pete Mauhar and ‘Michael Jordan Motorsports’ was born.

The team raced in the AMA Pro Superbike series and was assembled in just five weeks; something that would usually take around a year to do. Michael Jordan Motorsports had varied success throughout the years, but factory teams dominated the AMA series. There was chatter of a jump up to MotoGP in 2013, but that was too expensive, and eventually, the team was dissolved.

Bike racing wasn’t Jordan’s ‘Last Dance’ in motorsport; in fact, he is now entering a single-car team in NASCAR. Set to debut this year at the Daytona 500, 23XI Racing will see driver Bubba Wallace behind the wheel.

There’s Hollywood A-listers, and then there’s Leonardo DiCaprio. Known for being an environmentalist, even setting up his own foundation to help fight climate change among other things, DiCaprio also has strong links to Formula E.

Almost a year before the inaugural Formula E race, Leonardo DiCaprio partnered up with the Monaco-based Venturi team as a co-founder. Impressed by Venturi’s strong commitment to EVs and their pioneering technology, he helped bring the team onto the grid for the first season.

Although he departed the team shortly after the second season of the all-electric motorsport series, he has remained a loyal ambassador and friend to Formula E.

He helped produce the ‘And We Go Green’ documentary released worldwide in 2020 and continues to attend races whenever possible.

From one member of acting royalty to another, Jackie Chan helped co-found Jackie Chan DC Racing. The team currently competes in the World Endurance Championship and Asia Le Mans Series.

Chan always had a passion for motor racing, but after seeing the 1971 Le Mans movie starring Steve McQueen and hosting discussions with two-time Asia Le Mans Series champion David Cheng, they decided to co-found a team.

The two entered ‘DC Racing’ into the 2016 World Endurance Championship, before rebranding it ‘Jackie Chan DC Racing’ from 2017. They earnt a 1-2 result in the LMP2 class at Le Mans in 2017, finishing second and third at the world-famous race overall.

As well as success at the world’s biggest endurance race, the team have won several races in their respective categories and were crowned the teams’ and drivers’ champions for the Asia Le Mans Series in 2015-16 and 2017-18.

Mr. Worldwide has made the unusual jump to NASCAR in 2021, inspired by the Tom Cruise 90’s cult classic ‘Days of Thunder’. Yep, seriously.

Trackhouse Racing is a single-car team that will make their NASCAR debut this year. As well as delivering the garage tunes, Pitbull is an active partner as well as a brand and philanthropic ambassador.

Known for his big music bops, the American rapper released a video to his social media announcing the partnership to his latest music hit ‘I believe that we will win’.

That’s right. One of the world’s first reality stars and heiress of the Hilton Hotels empire once owned her own motorsport team. They also weren’t as shit as you might expect.

The bikes featured a very pink livery, with blue and white stars also covering the Aprilia machines. The official launch presentation was as glitzy and glamorous as you would imagine, with big Ibiza party vibes necessary at all times.

With the team racing in the 125cc category in 2011, young rookie superstar rider Maverick Vinales helped secure the team several wins throughout the season. His victory at the Le Mans race, aged 16 years and 123 days, made him the third-youngest winner of a Grand Prix event. He went on to win the ‘rookie of the year’ title that year and is now well-established in MotoGP.

On the subject of motorbikes, Spanish actor Antonio Banderas backed the Promoracing team for their entry into the Moto2 category in 2010. With the team name that sounded more at home on a perfume bottle, ‘Jack & Jones by Antonio Banderas’ didn’t set the world alight with their Moto2 entry.

Banderas and his team announced that the team would be saying ‘adios’ to the championship after just a year, leaving both riders without a seat for the following season.

The masked crusader still remains a loyal follower and supporter of MotoGP.

Letterman’s team has had notable success in IndyCar, as recently as last year when Takuma Sato won the Indy 500 in August. This was the second 500 win for Letterman as a team owner with his first being in 2004 with Buddy Rice.

At the team alongside Letterman is three-time IndyCar Champion and Indianapolis 500 winner Bobby Rahal and business Mike Lanigan.

The team has achieved 30 pole positions and 25 wins during its time in the IndyCar Series. Now who’s talking!

He might be known to people everywhere as ‘McDreamy’, but to us motorsport fans Patrick Dempsey is a well-known race car driver.

Having competed in big events like the 24 Hours of Le Mans and the Rolex 24 at Daytona, Dempsey previously co-owned Vision Racing which took part in the Indy Racing League.

Dempsey-Proton Racing also competes in the LM GTE AM category in the World Endurance Championship. Using Porsche machinery, their #4 car earnt two second-place finishes at the 6 Hours of Spa-Francorchamps and 24 Hours of Le Mans in 2020.

Other achievements for Dempsey-Proton Racing include a second place in the FIA Endurance Trophy for GTE AM teams in 2018. These impressive accomplishments feature alongside accolades such as a Screen Actors Guild Award, being voted People’s Sexiest Man Alive and launching an Avon fragrance on Dempsey’s website.

We love a man who can juggle such a varied career.

Actor Paul Newman and co-owner Carl Haas (no relation to Gene Haas) helped found one of the most successful CART/IndyCar teams the championship had ever seen: Newman/Haas Racing.

In their first season, the duo of Newman and Haas hired 1978 F1 world champion Mario Andretti as their main driver in the single-car team. Andretti won two races in their first year and finished third overall for the team’s inaugural season.

During their time in the CART series, they had drivers such as Alan Jones, Nigel Mansell and Michael Andretti race for them; with the latter two winning the drivers’ championship with the team.

Sebastien Bourdais also raced with the team when it became the Champ Car World Series and won four consecutive driver titles with the team from 2004 – 2007.

Have we missed any? Let us know in the comments below! 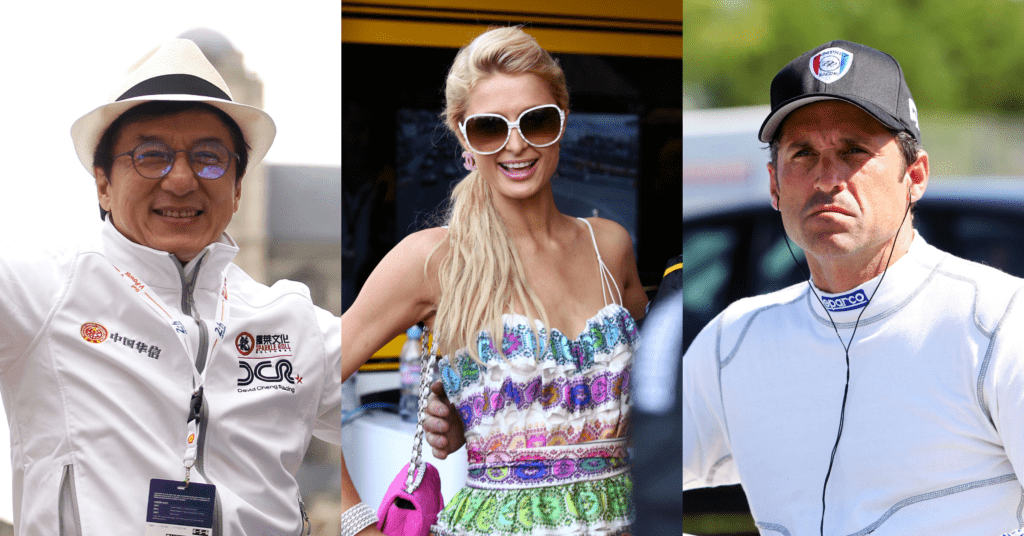