Assuming he qualifies, Fernando Alonso will become the 10th F1 World Champion to race in the Indy 500 this year. It’ll be incredibly interesting to see how he goes because whilst some of them had great success in the race, others… didn’t.

Sir Jack Brabham won titles for Cooper in 1959 and 1960, triggering the rear-engined revolution in F1. In 1961 he tried the Indy 500 and whilst his Cooper wasn’t the first rear-engined car to race there, it had a similar effect as it had in F1.

In the race his car was way down on power but the handling made up for it, and he finished on the lead lap in ninth place having run as high as third at one point. He made subsequent attempts in 1964, 1969 and 1970, but failed to finish each time.

Clark first entered the Indy 500 in 1963 (the year he also won his first F1 title) and finished a brilliant second; the following year he took pole but retired early on.

1965 was the big year however. He chose to miss Monaco and go to Indy instead (Alonso will be the first person to do this since Clark), where he qualified second, led for 190 of the 200 laps and took victory in his Lotus 38 – the first ever mid-engined victory at the Indy 500.

He also went on to win the F1 title that year, making him the only driver in history to win the 500 and the F1 World Championship in the same year.

Clark entered the Indy 500 two more times, finishing second in 1966 and retiring from the 1967 race.

Graham Hill first attempted the Indy 500 in 1963 but failed to qualify. He didn’t return until 1966 when he managed to win the race in his Lola, making him the first rookie winner since 1927 and the last until a certain Mr. Montoya won the race in the year 2000.

Hill raced again in 1967 but failed to finish, and in 1968 he drove the gas-turbine powered four-wheel drive Lotus 56, but crashed out just past half distance. That was his last race at the brickyard, but in 1972 he drove a Matra to victory at Le Mans, making him the first (and so far only) driver to complete the Triple Crown of Motorsport.

He retired in 1969, and had to withdraw from the 1970 race after suffering burns to his hands in a practice crash. In 1971 he had his best qualifying and started fourth but again retired from from the race.

After he won the F1 Championship in 1978 he had several near-misses at Indy. In 1981 the winner Bobby Unser was penalised for passing under yellows and Andretti declared the winner. However the result was appealed and four months later Unser was re-awarded victory. In 1985 he was victim to Danny Sullivan’s incredible ‘spin and win’ drive and in 1987 he retired from the lead with just 23 laps to go, having dominated the whole month of May.

These and other near-misses led to the suggestion of an ‘Andretti Curse’, which also affected other members of the Andretti family in later years.

After his F1 career had somewhat fizzled out after driving for his own team, Fittipaldi stayed away from racing for a few years but eventually resurfaced in America, racing in the CART series.

His career got something of a second wind and he was hugely successful. In 1989 he won the Indy 500 en route to the championship, and in 1993 added a second 500 victory, after which he famously drank orange juice instead of the traditional milk, causing an enormous uproar among fans.

After retiring from F1 Nelson Piquet attempted to qualify for the 1992 Indy 500, but a nasty practice accident gave him severe leg injuries and he had to sit out the race. He returned the following year for another go but dropped out early on with engine failure.

1993 was a bumper year at the Indy 500 for former F1 Champions, with Nelson Piquet, Mario Andretti, Emerson Fittipaldi and one Nigel Mansell all taking part.

Mansell famously left F1 for IndyCar after winning the title for Williams in 1992, and shocked everyone by winning the first race of the year and going on to win the championship.

Despite a lack of oval experience he drove brilliantly at Indianapolis and was leading with 15 laps to go, but he was swamped on a restart and Fittipaldi went on to win, though Mansell still finished a strong third. He raced again the following year, but was taken out in a bizarre crash behind the safety car.

Jacques Villeneuve finished second at Indy in 1994, his rookie year, and went on to win the event in 1995 having recovered from being two laps down at one stage.

He went on to F1 where he won the championship for Williams in 1997, but since leaving the sport he’s struggled to commit to any other series. He’s dabbled in sportscars, Nascar, Formula E and Rallycross, and in 2014 gave the Indy 500 another go, but could only finish 14th. That makes him the most recent F1 Champion to race at the Brickyard – until Fernando Alonso does so later this year.

Although the above are the only Formula One World Champions to race in the Indianapolis 500, there have been a few drivers who competed in it before they won the title.

In 1952 Alberto Ascari skipped Monaco to race a Ferrari at Indy, but retired after 40 laps. Jackie Stewart almost won the 1966 race on his debut before dropping to 9th with a car issue, and in 1967 was running third until a car issue again thwarted his efforts. Jochen Rindt also competed in 1967 and 1968, with unremarkable results.

There were also a couple of champions who attempted to race but failed to qualify. The first ever F1 champion, Giuseppe Farina withdrew in 1952 and then failed to qualify in 1956 and 1957. The following year the great Juan Manuel Fangio managed to qualify for the race, but didn’t feel like he was fast enough and chose to withdraw.

So, what to expect from Fernando Alonso at this year’s Indy 500? Well the Andretti team have won two of the last three races, including last year when rookie (and F1 refugee) Alexander Rossi took a shock win, proving that anything is possible.

Regardless of what happens to Fernando, two things are certain – he’ll be giving it nothing less than 100 per cent, and he’ll describe it as the best Indy 500 he’s ever driven. 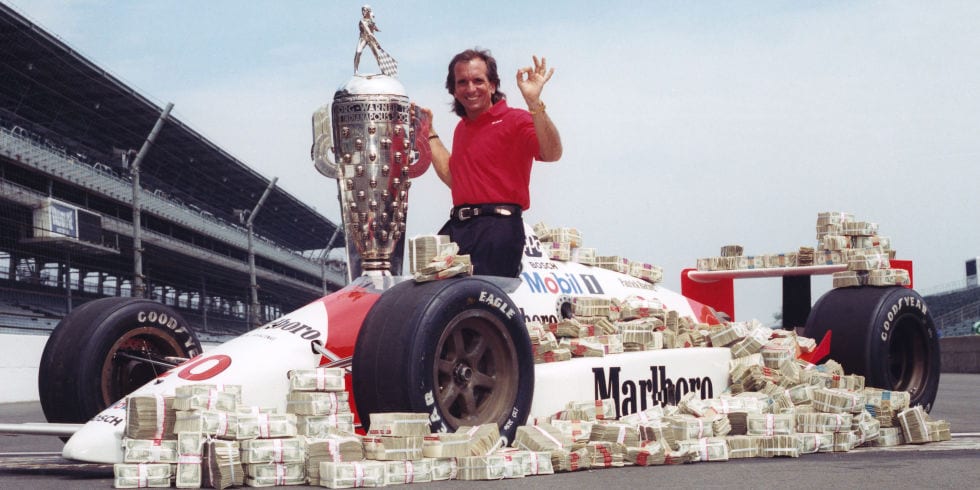