The unprecedented situation of F1 having multiple races at the same circuit this season led to an unusual problem. You can’t have two Austrian Grands Prix or two British Grands Prix, so what do you call the second race at each circuit?

F1 has decided that in Austria’s case, the second Red Bull Ring event will be called the Styrian Grand Prix, named after the region on Austria in which the track is located. However, for the second Silverstone race, the sport has gone with the altogether more unusual title of the ‘70th Anniversary GP’ – so named because 2020 marks the 70th anniversary of the Formula 1 World Championship, which began at Silverstone. It’s a nice touch, though it does sound a little weird.

Then again, they couldn’t follow Austria’s lead and name the race after the region, because the Silverstone circuit famously straddles two different English counties – Northamptonshire and Buckinghamshire (mind you, the ‘Bucks & Northants GP’ would have had a superbly English tone to it).

This won’t be the first time F1 has had races which aren’t named after their country, though.

Throughout the history of the sport, different races have had different names, whether for political, commercial, or simply logistical reasons.

In 1957, the Dutch, Belgian, and Spanish GPs had to be cancelled due to high oil prices resulting from the ongoing Suez crisis. To compensate, an extra race was added to the season at the fearsome Pescara circuit.

The host of the Coppa Acerbo before the Second World War and a mixture of sportscar and non-championship F1 races after it, the Pescara circuit ran along the Adriatic Coast of Italy and at 25.8km, is the longest circuit ever raced in F1 – yup, longer even than the Nordschleife.

The race slotted into the penultimate season slot, just before the season-ending Italian Grand Prix at Monza, and given the title Pescara Grand Prix after the province it was located in. Stirling Moss won the race for Vanwall ahead of Juan Manuel Fangio’s Maserati as Ferrari opted out of the race, apparently due to the danger of the circuit. It never appeared on the calendar again.

The creation of the Long Beach Grand Prix in California was done in response to F1’s desire to have a grand prix on the West Coast of America, with the track become part of the F1 calendar in 1976.

The problem was, there was already a United States Grand Prix, held at Watkins Glen in New York, so the Long Beach Race was given the inspired and creative title of the ‘US GP West’. This also led to the Watkins Glen race being referred to as the US GP East, though it was never officially given that name.

Even when Watkins Glen disappeared from the calendar after the 1980 race, the Long Beach event continued to be known as the US GP West until it too dropped off the calendar following the 1983 season, at which point it became a mainstay on the IndyCar calendar.

in 1980, Monza was undergoing some much-needed renovations, but the prospect of an F1 season without an Italian Grand Prix proved unthinkable, so the Imola circuit hosted the race instead.

However, the event proved so popular that the organisers wanted to continue hosting F1 races even once Monza returned. So, after coming to an arrangement with the tiny country of San Marino (an hour’s drive south-east from Imola), the circuit returned to the calendar in 1981 under the title of the San Marino Grand Prix.

It remained a much-loved venue (albeit one with a tragic place in the sport’s history) until 2006, and rumours persist that it may yet return to an F1 calendar in the future.

The idea of holding a grand prix in Las Vegas occasionally gets floated about, but in the early 1980s, it actually happened… albeit not entirely successfully.

Although it was the scene of a dramatic championship finales in both 1981 and 1982, those were the only two F1 races the circuit would hold. Why? Well, the circuit itself was flat, unremarkable and featureless, largely because it was set up in the car park of the Caesar’s Palace hotel – hence how it got the name Caesars Palace GP and not the Las Vegas GP.

Although it wasn’t the worst track for racing, it proved to be as unpopular with the fans as it was with the drivers. After F1, it had a brief tenure as a CART venue.

Yep, it’s another American venue. F1 was keen to branch out stateside in the 1980s and the Detroit street circuit appeared in 1982 under the guise of the Detroit GP, joining Caesars Palace and Long Beach on the calendar.

Bizarrely that makes 1982 the only year in F1 history to have had three grands prix in the same country – although not one of them was simply called the US GP.

Detroit was an extremely demanding circuit with an average speed even slower than Monaco, and the combination of searing temperatures, crumbling surfaces and shoddy temporary facilities meant that the race had outstayed its welcome by the end of the decade, and the 1988 race proved to be the last.

French presence in F1 was at an all-time high in the early 1980s. Renault had revolutionised the sport with its turbo engines, and many of the top drivers of the time were French – Didier Pironi, Alain Prost, René Arnoux, Jean-Pierre Jabouille, and Jacques Laffite were all race winners.

To capitalise on this, the French arranged for a second race to take place on the 1982 calendar. Alongside the French GP at Paul Ricard, there would also be a race at Dijon-Prenois under the name of the Swiss GP – even though it was a good couple of hours’ drive from the track to the Swiss border.

Switzerland had banned motor racing following the Le Mans tragedy of 1955, but until then had hosted its own F1 race at Bremgarten. This makes it the only country to have lent its name to races which have taken place both inside and outside of its borders. Interestingly, there was also supposed to be a Swiss GP at Dijon in 1983, but it had to be cancelled because French TV stations refused to cover the event.

The term ‘European Grand Prix’ used to be an honorary title awarded to different races in the early years of F1. For example, the 1963 Monaco Grand Prix was also known as the European GP, as was the 1977 British GP – the last time the title was used in this way.

The term was revived in 1983, this time as an official name, when a planned US Grand Prix in New York (one of a selection of potential F1 circuits that never happened) was cancelled. As a result, Brands Hatch stepped in to host a round as a replacement and was dubbed the European GP.

Interestingly, despite the fact the the Nurburgring was the only German venue to host a race in 2007 (the plan was that it would alternate years with Hockenheim), the contract at the time meant that the Hockenheim still had the rights to hold the German GP, so the Nurburgring was left to be known as the European GP for an extra year.

Also rather interesting is the fact that the first race at the Baku City Circuit in Azerbaijan in 2016 was known as the European GP. With the country geographically located on what’s considered to be the border between Europe and Asia on the Eurasian landmass, the government initially trying to position itself as more of a European nation than an Asian one, before adopting the Azerbaijan GP moniker from 2017 onwards.

Another short-lived American race which wasn’t awarded the title of US GP, the Dallas Grand Prix was – unsurprisingly – held in Dallas, Texas.

Held in the height of summer for some reason, temperatures pushed 40°C, the track fell apart, and most of the field either spun out or crashed in a race that some of the drivers had even attempted to boycott. Keke Rosberg won for Williams, but the event had been a bit of a disaster and Formula 1 never returned.

Sadly, despite the name, the Pacific Grand Prix wasn’t an underwater race. It was, however, a way for Japan to sneak an extra race onto the calendar in the wake of the extreme popularity the sport had gained in Japan due to Honda’s success as an engine manufacturer.

Unfortunately, the Pacific GP didn’t take place at a track as good as Suzuka, nor did it even go to Fuji. Instead, the location was the TI Aida circuit (now known as Okayama) which despite having good, modern facilities, was saddled with being located in a remote, difficult to access location. That and the fact that the track was a bit crap.

Michael Schumacher won first time out in 1994 – the race where Ayrton Senna famously crashed out at the first corner, stayed trackside for a bit, and questioned whether Benetton was using illegal traction control. An earthquake meant that the 1995 race had to be moved to October and held back-to-back with Suzuka. Schumacher won again, but nobody enjoyed the hassle of the event and its five-year contract was cut short.

With Luxembourg only being a couple of hours away, the decision was made to run the event under the title of the Luxembourg Grand Prix, which was won by Jacques Villeneuve after an unfortunate engine failure cost Mika Hakkinen his first win.

Although there was no race at Jerez the following year, contractual issues meant the European GP name was unavailable, so the Nurburgring hosted the Luxembourg GP once again – Hakkinen managing to win this time, a crucial result in his title fight with Schumacher – before it reverted to becoming the European GP once more in 1999.

Instead, it’s named after Abu Dhabi – the capital of the UAE, the largest of the emirates, and the government that funded the event in an attempt to boost tourism and global recognition over.

For the next three years, this will also be the case for another race – the Mexican Grand Prix is being renamed to become the Mexico City Grand Prix. 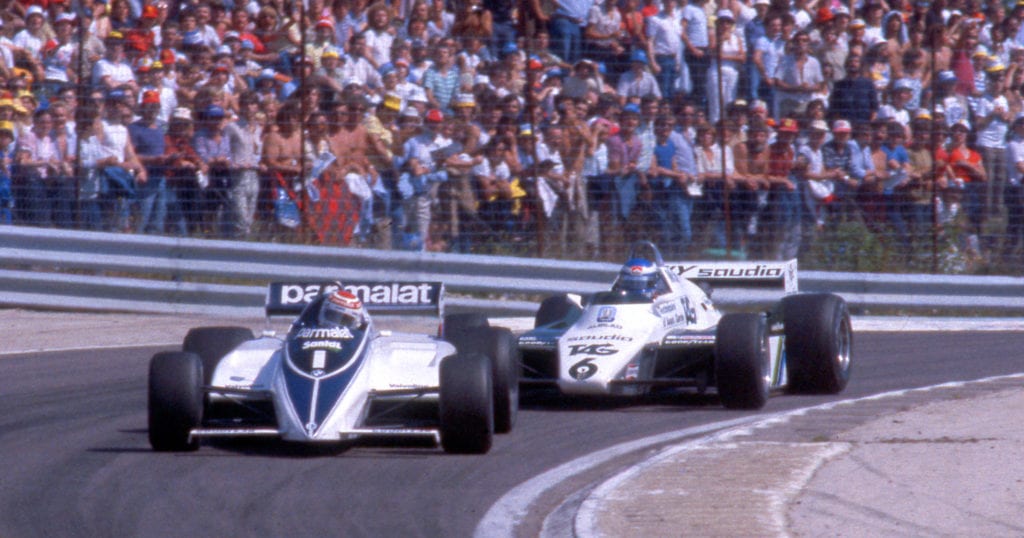