A Broken Kerb Caused Mayhem During The NASCAR Race At Indy

Indianapolis is infamous among F1 fans for the crazy tyre failures that meant we got the dreadful six car race in 2005. And now there’s been even more controversy at the Brickyard with a kerb failure at yesterday’s NASCAR race which caused some huge accidents.

Indy has been very busy this weekend with two NASCAR races and an Indycar race all at the same track, it’s been a proper celebration of American motorsport! But the headline event, the NASCAR Cup race, had a bit of a messy ending because the kerbs at Turn 6 just fell apart when the cars went over them! Seriously!

At a restart on lap 78, William Byron went over the kerb and it broke apart and spun him out in the middle of the track. Just behind him, Joey Logano’s front splitter then got wedged underneath it – that’s right underneath the kerb – which ripped off the front of his car and damaged the kerb even more before Joey was flung into the wall.

Take a look at what happened to @WilliamByron, @joeylogano and other drivers late at @IMS. pic.twitter.com/KS6qIjRZFD

The pack behind came over the kerb at full speed too and a load of them lost control and flew off into the wall or spun down the track. It was mad! 10 drivers were involved in the chain reaction and the red flag came out. Thankfully everyone was ok. Lots of drivers even managed to reverse out of the barriers and rejoin the race.

Debris had already become stuck underneath the kerb earlier on in the race so repairs had been made but in the end the kerb just couldn’t stand the force of the low running cars flying over it lap after lap. It became loose and carnage was inevitable.

The officials removed the kerb entirely and it was dragged away by a tow truck rather than replacing it with another makeshift one.

But then even more cars crashed at the next restart too and in the same place! C’mon NASCAR, chill! Cars spun on the new surface and others tried to avoid those ahead which meant that another caution was flown before a final restart got underway.

Eventually, Denny Hamlin and Chase Briscoe emerged fighting for the lead. Briscoe, who had a penalty for cutting the track, rammed Hamlin off the road so part time Cup series driver AJ Allmendinger came through to take the win basically by staying out of trouble!

In true NASCAR style it was crazy and wild and we wouldn’t have it any other way! 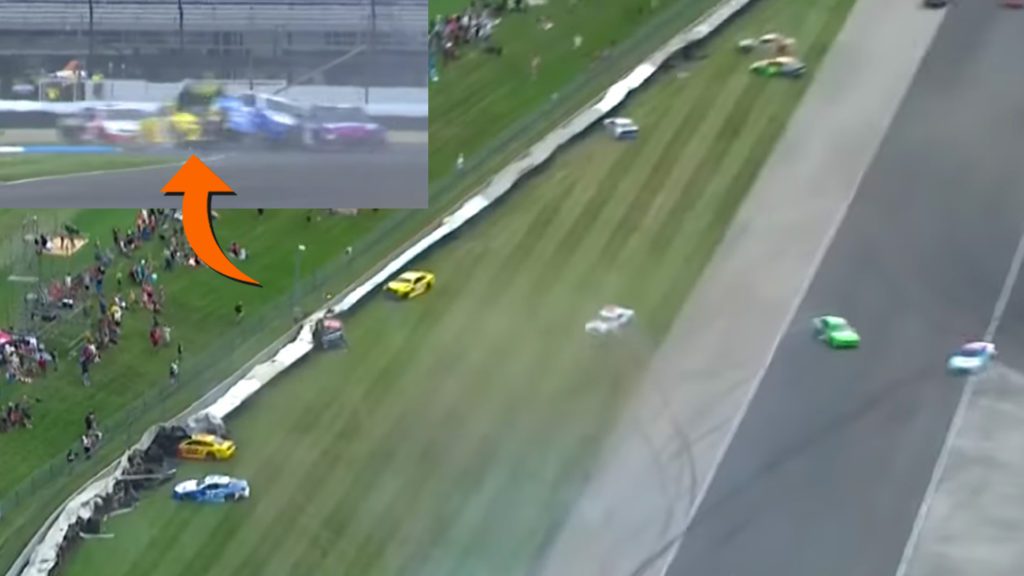