A Course Vehicle Flipped Over While Sweeping The Track During The IndyCar Weekend – WTF1
Skip to content
×
Crash , Indycar , WTF

If you’ve ever been to an actual race meeting, you’ll know that all sorts of activities occur on the track in between races – marshals picking up debris, safety cars doing exploration laps, tow trucks collecting broken-down cars, that sort of thing. If you’re anything like me, you’ll have looked at the various types of vehicle – say, a track sweeper – that use the circuit and thought ‘wow, I bet it’d be fun to see how fast you can drive one of those!’

Well, wonder no more, because at Barber Motorsports Park this weekend, someone has found that out for us. Cleaning the (very) outside line of Turn 3 at phenomenal speed, the driver dipped a wheel on the grass, got sideways, and rolled it.

The @BarberMotorPark sweeper pilot was on a flyer with @FirestoneRacing red alternates. It happens to the best of us 😂#INDYCAR // #HIGPA pic.twitter.com/72tzu6dqXh

The driver appeared to be OK (well, presumably apart from the embarrassment of rolling a track sweeper) but the incident required a bit of a clean-up operation which delayed an upcoming Mazda MX-5 race.

As for the IndyCar race? Takuma Sato utterly dominated from pole, despite an off-track excursion in the closing stages, while Scott Dixon recorded his sixth second-place finish at a circuit he’s never won on. 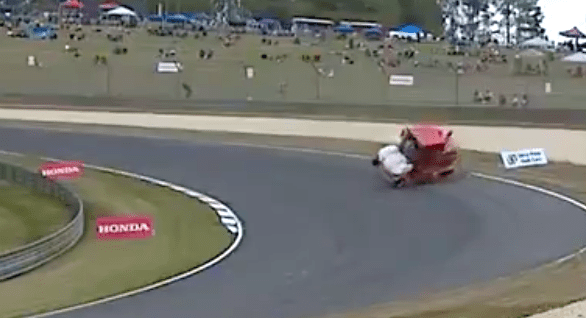