After qualifying, Charles Leclerc mentioned that pole might not be the best place to start, given the huge run down to the first braking zone and the potential for other drivers to slipstream ahead.

To counter that, it seems Ferrari came up with a plan – Leclerc would make sure to give Sebastian Vettel and not Hamilton the tow at the start and, if Vettel took the lead, he’d hand the position back. It worked perfectly – apart from the bit where Vettel was supposed to let Leclerc back past.

The problem was that not only was Hamilton too close behind to make switching the positions easy, but Vettel was simply too fast. After some team radio ‘discussions’ it seems that it was agreed that the positions would change later on in the race, at which point Sebastian dropped the hammer and simply drove off into the distance.

The position swap came about during the stops. Leclerc pitted first and was given enough time to undercut his teammate, which from Ferrari’s perspective worked out a treat. IT did from a fan perspective, too – now, we had the interest of a seemingly faster Vettel on fresher tyres chasing down his teammate, along with seeing how Mercedes’ alternate strategy would work out.

Then, Ferrari’s race unravelled. On his outlap, Vettel’s MGU-K cried enough, and he was out. Adding insult to injury, he couldn’t get his car back to the pits without doing further damage and had to stop on track, bringing out the VSC. That gave both Mercedes drivers a free pit stop and put them in first and second. And despite the straight-line speed advantage of the Ferrari, Leclerc was unable to really challenge Valtteri Bottas, let alone go after Hamilton.

And that’s how things stayed. Not only did Ferrari not get a one-two or even a win, they didn’t get two cars to the end. And on top of all that, the team now has to cope with whatever fallout may arise from Vettel taking matters into his own hands.

Max Verstappen was a lonely fourth ahead of Alex Albon, who fought through nicely from the pit lane and also benefitted from the VSC/safety car period. Carlos Sainz was challenging the Mercedes drivers at the start and finished a superb sixth ahead of Sergio Perez, Lando Norris, Kevin Magnussen, and Nico Hulkenberg.

Lance Stroll just missed out on a point, while the Toro Rossos and Alfa Romeos never really looked in contention. Romain Grosjean was on the wrong end of a three-car incident on the opening lap which also later accounted for Daniel Ricciardo, while George Russell crashed out with an apparent brake failure, the team also seemingly retiring Robert Kubica in fear of a repeat problem.

Although Hamilton and Mercedes were fortunate with the VSC timing, it is one of the potential benefits of running longer on the first stint so from a strategic point of view, you could call it a calculated risk. And when he was in clean air Hamilton showed that in terms of race pace, the Mercedes is every bit as quick as the Ferrari – if not a touch faster.

The Brit is still marching towards his sixth title, but the story now is firmly about the resurgence of Ferrari, which looks like it’ll be the team to beat at many of the remaining races. And of course, the most interesting thing about that is seeing how the team copes with the tensions of two drivers who are becoming increasingly competitive against each other… 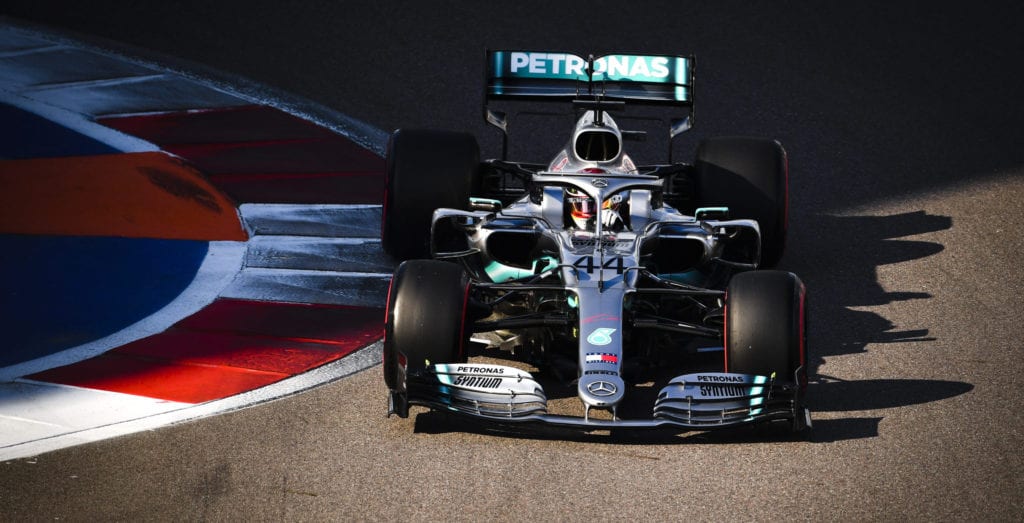