A Kangaroo At Bathurst Had A Go At Being A Safety Car – WTF1
Skip to content
×
Endurance , WTF

The Mount Panorama circuit is known for its wildlife invasions, with any races at Bathurst known for the driver notes specifically mentioning what to do when a kangaroo finds its way onto the track.

We hope the drivers read the rules because that’s exactly what happened during practice for this weekend’s Bathurst 12 Hours. A couple of ‘roos cheerily hopped along the track on the run up to The Cutting and holding up a queue of cars, prompting the red flags.

The best thing about this is the Porsche driver flashing his lights at them like you would an obstinate backmarker.

It was a very incident-filled day, which was punctuated by a number of crashes and offs. Marvin Kirchhofer was fortunate to walk away from this terrifying roll in which his Aston Martin almost vaulted the barriers.

Then there was this nasty incident where Sam Shahin was tagged into the wall coming out of the McPhillamy Park corner at the top of the mountain. Narrowly missed by a couple of cars, the unsighted Mercedes of Tyler Everingham clips the stricken Shahin and is fired into the wall. Luckily, everyone involved was OK.

Thankfully Everingham is OK after that one. #B12hr #VASC pic.twitter.com/qAZIy3fHXa

And how about this moment, where a car ended up on top of the tyre wall? 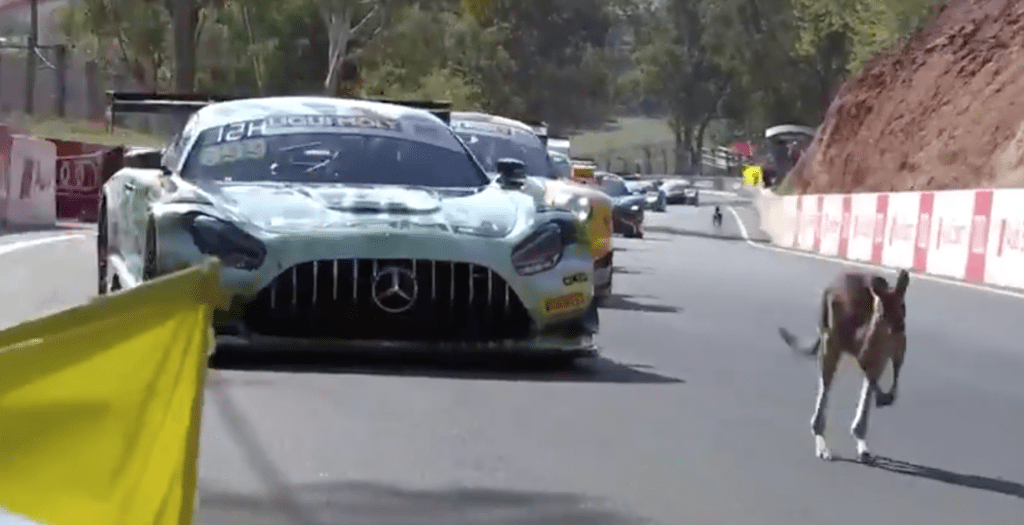