With not a lot going on during the Canadian GP, 2016 champion Nico Rosberg turned to Twitter to answer fans’ questions. Most of them were pretty standard, but when he was asked whether Alonso should be up racing the front, he didn’t pull any punches with his answer.

we all want to see that. but noone wants him because of his team internal politics games #skyf1 #asknico https://t.co/IrrjJpUGm6

Considering some of the mind games Rosberg appeared to play and the way he retired right after winning the title, his comment didn’t exactly go down well with some fans.

Internal politics? name a driver or their manager who doesn't do this to a greater or lesser degree/extent? ans=0

What internal politics? Look who's talking. Save your words and go enjoy your cowardly retirement alone.

internal politics? Funny, coming from a driver that couldn’t handle the pressure of defending a championship

Number 1 drivers always try to play the "politics games" even Senna complained, Hamilton and you hated each other on track, only really RedBull that don't pick and choose but clearly even there max is number 1

You know well Fernando? Shame on you for this! You did not even have the courage to defend your title! Y como entiendes el español: "tu no llegas ni a la suela de los zapatos de Alonso. Y lo sabe todo el mundo!" #regards

What and Vettel and Hamilton don’t play games? Schumacher? Senna?

real champions are those who defend their title. Only god knows how many games you've played to win that only title.

Poor Nico! I have to remind you what happened with the last guy who talked bad about Fernando. You have a big problem now. pic.twitter.com/Uqxr66mijQ

Dude, i might be the only pesron that defended you & supported u but to be honest you let me down with this reply. Do u have evidence of what you are claiming? I think @SkySportsF1 should drop you off before you do some major damage. It's not your calling to analyze races. Go 👎

To be honest I think I was not for Nico to say that about Fernando . He was out of order . Especially live on TV . I hope Fernando has words with him .

Nah… that's what all the other drivers and managers want it to be because they are too afraid to have him as team mate. It is a shame for the sport and for the fans that this status quo is maintained. That's why fans still talk about Senna/Prost, epic duel in spite of politics

Not everyone went into a fit of blind rage, though – some people agreed with him, whilst others were simply amazed at his sheer honesty.

For all those who criticize Nico now: He probably knows 100x more about F1 than you all together. Someone asked a question and he gave an honest answer and i am pretty sure he is right. Just look at Hungary 2007 or Germany 2010 what he did with his teammates…

Typing with my feet because with my hands I'm clapping

literally everyone involved with f1 says the same but yall only attack him for it. okay

Ooooohh somebody finally admits it

Haha why is everyone shocked in the comments at this response? 😂 this has been said for years now. Not even new information. pic.twitter.com/ko7KInI0Qy

Sit on the fence why don’t you Nico 🤷🏻‍♂️

Damn finally honest truth from someone that knows the insight, respect! I wasn't a fan of your Kimi comments, but maybe there's some truth to them, thought he can still be fast every now and then.

Oh yes, the Kimi comments. Nico also gave his opinion on why he thinks Kimi Raikkonen is having such a bad season and he was just as frank.

past his prime and messing up Q3s in qualy and vettel doing great job! #skyf1 #asknico https://t.co/2bJkZJFE1l

Whether you agree or disagree, it’s great to have a world champion (who isn’t Jacques Villeneuve) coming out and being so open and honest with his opinions. More of the same in future please, Nico! 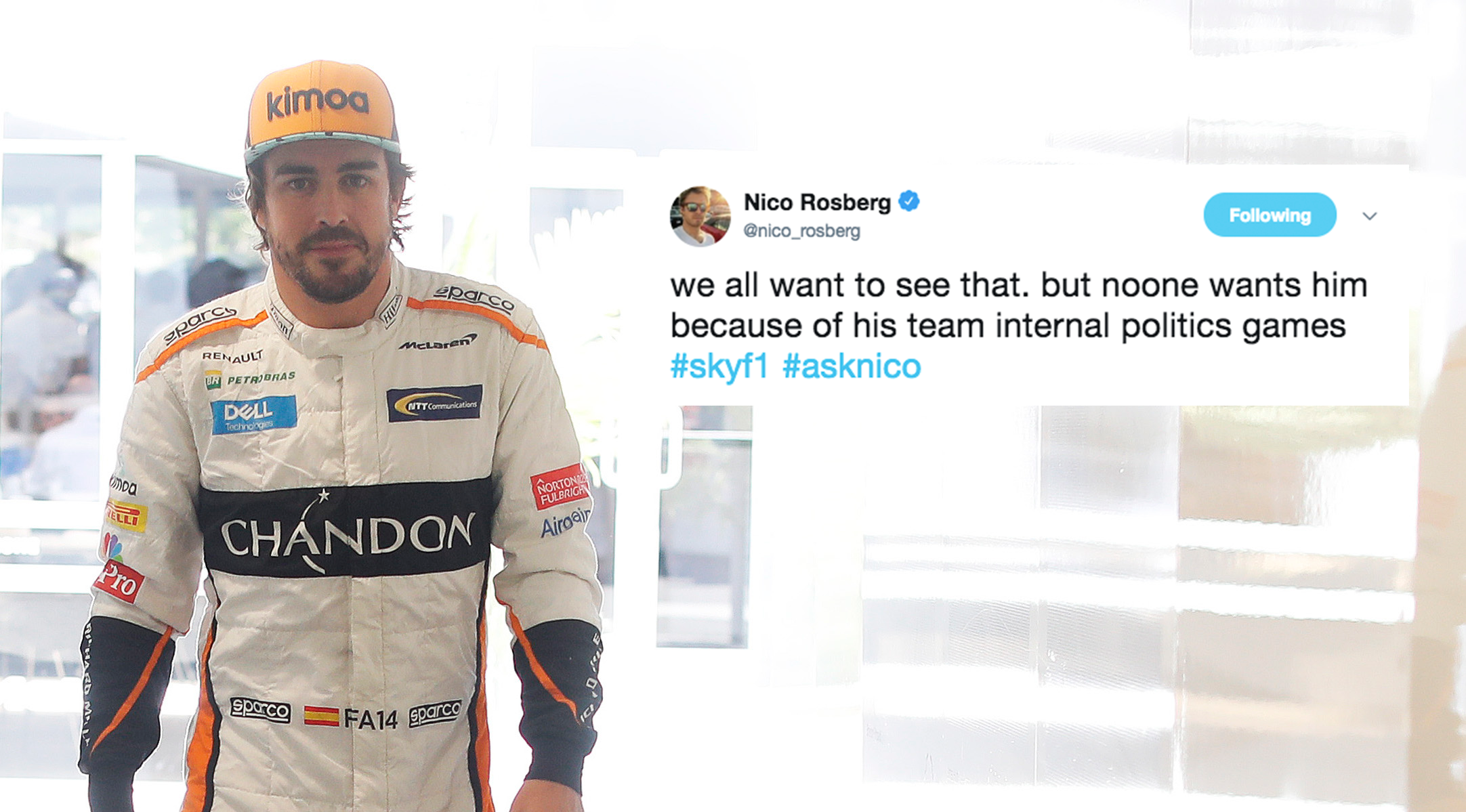