A Loose Drain Cover Caused Grosjean To Crash In A Big Way During FP2 – WTF1
Skip to content
×
Crash , Formula 1

After first free practice session was disrupted by rain, the track was a hive of activity in FP2 and drivers attempted to make up for lost time as the track record continued to tumble.

The session was brought to a premature halt however following an enormous accident for Romain Grosjean at Turn 13. On first viewing it appeared to have been caused by a sudden puncture, but replays showed something much more bizarre.

Valtteri Bottas’s car caused a drain cover on the track to come loose. Kimi Raikkonen just managed to avoid it, but Grosjean’s car hit it with sickening force, causing the left rear tyre to deflate and sending the Haas driver into the barriers.

Thankfully Grosjean was OK, but unsurprisingly the session was red-flagged and with so little time left, that was that for FP2. A presumably furious Charlie Whiting also went out in the safety car to inspect the circuit.

Race director Charlie Whiting is currently investigating the loose drain cover, but the session will not be restarted #MalaysiaGP 🇲🇾 #C4F1 pic.twitter.com/WWPEA90YZO

Loose drain covers are the sort of thing you might occasionally expect to see on a street circuit, but it’s super weird to see it happen on a permanent circuit like Sepang. That said, Juan Pablo Montoya was put out of the 2005 Chinese Grand Prix with the same problem.

The session was not restarted, meaning Sebastian Vettel topped the first day of running from his teammate Kimi Raikkonen. 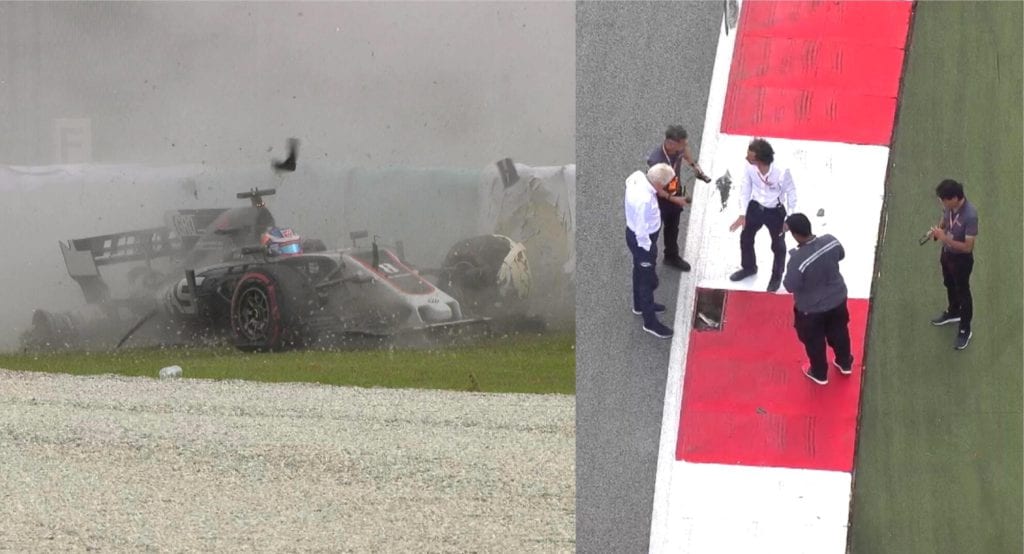