A One-Off Entry Took An Epic Surprise Win At The Swedish Round Of World RX – WTF1
Skip to content
×
News , Rallycross

Success for a wildcard entry has been threatening to happen all season. At Spa, Joni Wiman progressed through as top qualifier and finished up third, and Kevin Abbring came close to winning in Hell. In Sweden, it finally happened.

A bunch of wildcard entries bulked up the grid and many of them performed well, but it was Sebastian Eriksson – who lost a win at the very same track with a car failure back in 2014 – who was the best. In his semi-final he took the win on the penultimate corner as Niclas Gronholm suffered a puncture, and in the final he benefitted from chaos behind him to be able to build up a gap before taking his joker lap. At that point, his OMSE Fiesta started to overheat and he lost pace, which meant having to withstand epic pressure from championship leader Kevin Hansen on the final lap.

Despite Hansen’s best efforts, Eriksson held on to take his maiden World RX win in only the fourth event of his career, and his first since 2017. It was also the OMSE team’s first event of the season having elected to miss some rounds in order to develop a new car. Overheating issues aside, it seemed to work alright! Eriksson’s win was also the team’s first since Kevin Eriksson (no relation!) took a memorable win with a ridiculous overtake in Germany in 2016.

Kevin Hansen’s second saw him retake the lead from brother Timmy, who had been in the mix in the final until he developed a puncture after landing awkwardly from the jump. Another non-series regular in the form of Reinis Nitiss finished third, which was a remarkable result considering he had this colossal roll during Q1.

💥 We're glad @reinisnitiss is OK after his WILD roll in Qualifying 1. Will the @gronholm_rx squad be able to get the car ready for Qualifying 2? Find out from 14:20! #worldrx #rallycross #motorsports #crash

Someone rather less happy was Andreas Bakkerud. He’d dominated the qualifying phase and was leading his semi-final when a driveshaft issue put him out of the event.

The Hansen brothers are now separated by six points in the championship, with Bakkerud a further 16 points back. Gronholm sits fourth in the championship – impressive, considering illness caused him to miss two of the six rounds so far. Without that, he’d surely be fighting for the title. Hey, he still might yet – with four rounds remaining and the competitive order being shuffled around from one event to the next, anything can happen. 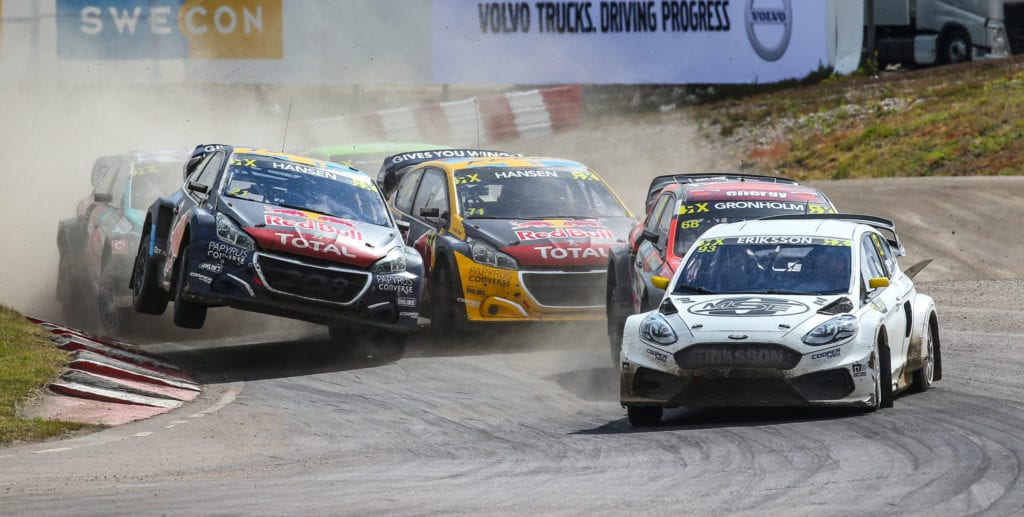