A Photo Of The McLaren MCL33 Has Been Leaked And Yes, It’s Papaya! – WTF1
Skip to content
×
Formula 1 , News

A Photo Of The McLaren MCL33 Has Been Leaked And Yes, It’s Papaya!

In what is turning out to be a very leaky launch season with Sauber, Toro Rosso and even Fernando Alonso’s helmet getting prematurely revealed, The new McLaren has been shown off a day before it’s due to be publicly revealed.

The team was shaking down the Renault-powered MCL33 at the Navarra circuit in Spain and whilst the car was being loaded (or unloaded) onto the transporter, it looks like a gust of wind raised the sheet, revealing the car in what looks to be all its papaya glory.

Sure, it’s a distant and slightly blurry image, but that livery looks like to could be an absolute beauty. Either that or McLaren is just trolling us all. 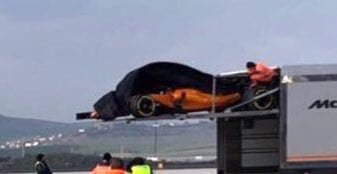