A Stage-By-Stage Review Of How Alonso Performed On His Dakar Debut – WTF1
Skip to content
×
Formula 1 , Rally

After 12 days, 12 stages, 43 hours and almost 5000 km of competitive running, Carlos Sainz Sr has taken victory in the Dakar for the third time in his career – not a bad effort for a 57-year-old. But this year he wasn’t the only Spanish motorsport legend drawing the world’s attention.

Down in 13th place overall (out of 82 starters in the car class) and four hours and 42 minutes slower than Sainz, on paper Alonso’s maiden Dakar Rally appears hard to judge. He was the top rookie this year, but fourth of the four Toyota Gazoo Racing cars and almost three-and-a-half hours slower than any of his teammate. So, was he actually any good? Well, when you look at a stage-by-stage break down of Alonso’s rally, his performance should hopefully become slightly clearer.

Stage 1, 319km – 11th
Alonso came out the blocks pretty steadily with 11th on the first stage, 15 minutes down on stage winner Vaidtora Zala.

Stage 2, 367km – 63rd
The second stage of the event was the one that really hurt Alonso’s chances. Approaching the halfway point of the stage, he ran over a rock which ripped off a wheel and damaged the suspension. That’d be a guarantee of retirement in pretty much every other form of motorsport- but not the Dakar.

Alonso and co-driver Marc Coma broke out the toolkit and got to work repairing the Hilux. They eventually got going again, but had lost almost two-and-a-half hours, dropping them right down the order. Still, at least they were able to keep going. Doing all that preparation for an event lasting nearly two weeks, only to drop out on day two would be about as sucky as getting all hyped up for the Indy 500 only to fail to qualify. Wait a minute…

Stage 3, 427km – 4th
The third stage was much, much better. Alonso initially finished up fifth fastest but was promoted to fourth when Toyota teammate Nasser Al-Attiyah was awarded a three-minute penalty for holding up Sainz. That not only promoted Alonso to fourth, but meant he ended up as the fastest Toyota driver. Not bad for a rookie with a circuit racing background up against three drivers with 40 starts and four Dakar wins between them!

Stage 4, 453km – 13th
A fairly lowly stage for Fernando as he finished down in 13th. However, this would end up being his worst stage finish that wasn’t affected by some sort of major incident.

Stage 5, 353km – 7th
A solid improvement over the previous day’s running and the beginning of a very consistent middle part of the rally for Alonso.

Stage 6, 477km – 6th
Alonso appeared on course to finish in the top five for the second time in the rally, but ended up slipping to sixth at the end. Still, he was quicker than two of his TGR teammates.

Stage 7, 546km – 6th
Alonso ended the longest timed stage of the rally with another sixth place, just under eight minutes slower than stage winner Sainz. Not bad when you’ve been racing for well over four hours…

Stage 8, 474km – 2nd
Undoubtedly the highlight of his rally, Alonso beat all of the major competitors like Sainz, Al-Attiyah, and 13-time Dakar winner Stephane Peterhansel to finish second during the eighth stage. He was beaten only by Mathieu Serradori, who took his first stage win in his first Dakar competing on four wheels instead of two. Alonso was four minutes behind Serradori in a comfortable second in an increasingly impressive Dakar debut.

Stage 9, 476km – 9th
A slight slip back down the order as Alonso a lowly ninth, 13 minutes behind stage winner Peterhansel. This did, however, move him into the overall top 10 for the first time, which looked like being his best possible result following his dramas on the second stage – unless anyone in front of him ran into problems…

Stage 10, 534km – 56th
Unfortunately, Alonso was the one who ran into problems. Pretty much as soon as the 10th stage had begun, Alonso went over a sand dune a bit quick and at slightly the wrong angle and ended up tumbling down the hill. That left him having to perform some repairs once again – a couple of tyre replacements and new suspension components – which cost him more than an hour. He also removed the broken windscreen for better visibility.

Stage 11, 379km – 8th
The penultimate stage of the event was a much more normal one for Alonso as managed to go eighth fastest.

Stage 12, 166km – 4th
The final stage was an extremely good one for Alonso – he wound up being just three minutes and 25 seconds behind stage winner Al-Attiyah. Although he was ‘only’ fourth fastest, that represented the smallest time gap he’d had to a stage winner in the whole event. It wasn’t enough to move him any further up the order, however, and he ended his first Dakar experience in 13th position overall.

So, is 13th any good? Well, eight stage-finishes in the top 10, three in the top four, twice being the fastest Toyota Gazoo Racing driver would suggest so. And if you got rid of the time he lost in his two major incidents in stages 2 and 10 – around three-and-a-half hours – he might have finished somewhere around sixth or seventh.

However, incidents like those are exactly the sort of thing that experienced pros learn how to avoid. You’re never going to have a completely trouble-free run in the Dakar, but there’s a big difference between stopping to fix a few punctures and stopping to replace entire suspension components. Alonso still has a long way to go before he can think about fighting for victory.

On the other hand, the fact his pure speed put him in the running for stage wins is seriously impressive, considering that he doesn’t come from a rallying background. And just finishing at all is a big achievement – of those 82 starters in his class, over 40 per cent of them failed to reach the finish.

If Alonso is serious about adding a Dakar win to his CV, he appears to have pretty much everything he needs to achieve it… except for experience. And getting that will take him years. 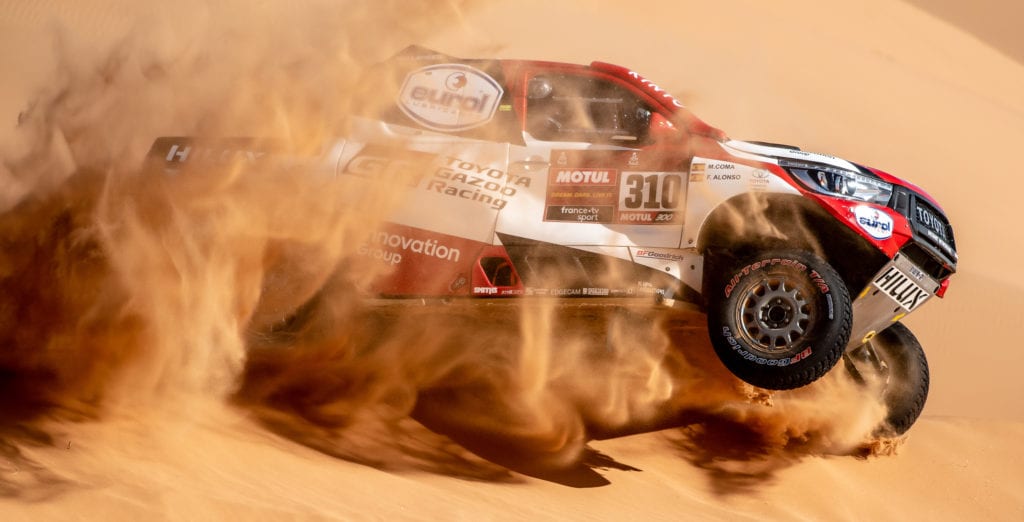