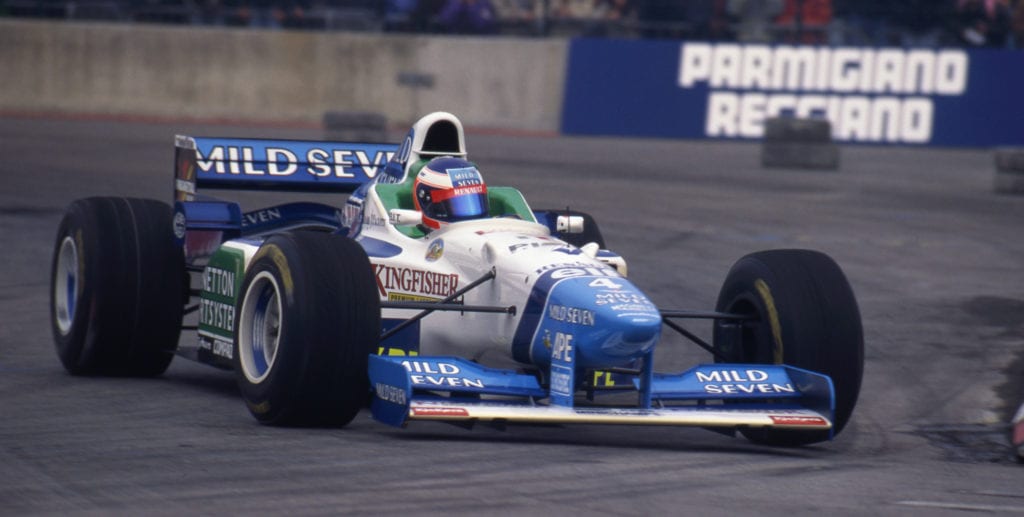 Every December from 1988 until 1996, the Bologna Motor Show hosted this unusual series of competitions which, despite the name, actually took place outside, in the grounds of the exhibition centre where the motor show was held.

Now, if you’re expecting shots of a full field of 20-plus F1 cars racing around a car park, you’ll be disappointed. The track layouts used were far too short to race two cars against each other, so the event instead took on a 1v1 knockout format, similar to that used by the Race of Champions (which also started in 1988, but was purely a rallying event).

Two drivers would start at different places on the track, set off at the same time, and whoever completed four laps the quickest progressed through to the next round.

The entry lists were never huge, and each one was almost exclusively attended by small, backmarker teams and drivers. Sadly, this doesn’t mean there’s footage out there of Alain Prost’s Ferrari racing Ayrton Senna’s McLaren around a car park, but it does mean that there’s an F1 event with an entry list like an early 90s pre-qualifying session which was won four times by Minardi – and I think that’s even cooler.

Let’s start with the first event in 1988, which featured the phenomenal line-up of Pierluigi Martini and Luis Perez-Sala driving for Minardi, Alex Caffi in a Scuderia Italia, Nicola Larini in an Osella, and Fabrizio Barbazza in a EuroBrun.

The sixth car was incredibly unusual. The FIRST Racing outfit, an F3000 team which was planning to enter the 1989 season, entered Gabriele Tarquini in its new F1 car, the 188.

By the time of the 1989 F1 season, FIRST had suffered some manufacturing problems and decided not to enter a car which it knew would be incredibly uncompetitive. That makes this the only F1 entry for the FIRST team – although one of the chassis was later bought by the Life team and used in F1 in 1990.

Tarquini lost out to Perez-Sala in the first round, with the Spaniard going on to win the entire event for Minardi, defeating Caffi’s Scuderia Italia in the final.

1989 saw the entry expand to seven cars, which would turn out to be the biggest field the F1 Indoor Trophy ever managed.

Martini and Perez-Sala were back for Minardi, with Andrea de Cesaris taking over the Scuderia Italia. Osella brought two cars, this time for Enrico Bertaggia and Andrea Chiesa, with Pierre Henri Raphanel in a Coloni and Claudio Langes in a EuroBrun (I know, I know, these are some properly big names we’re talking about here).

Presumably because he was the most experienced and biggest-name driver in the contest, de Cesaris was automatically given a spot in the semi-finals, but he was defeated by defending winner Perez-Sala.

Meanwhile, Martini beat Bertaggia in the other semi-final to make it an all-Minardi showdown in the final.

Martini gave it his all in the final, but once again Perez-Sala took the top honours.

For 1990 the entry was down to just five cars. There was Olivier Grouillard in an Osella…

…Pedro Chaves in a Coloni…

…and Domenico Schiattarella – a man who wouldn’t make his proper F1 debut for another four years – in a EuroBrun.

However, for the third year on the bounce, the F1 Indoor Trophy was once again won by the dominant Minardi team, this time in the hands of Gianni Morbidelli.

Minardi’s streak was finally broken in 1991 when Morbidelli was beaten in the first round by Antonio Tamburini – a man who never made it to F1 – driving a Coloni chassis which had been entered by new owners Andrea Moda. The team which went onto achieve incredible heights of infamy in F1 during a hilariously inept 1992 season, but that’s a story for another day…

Tamburini lost out to Johnny Herbert’s Lotus in the semi-final, who’d himself lost out to Gabriele Tarquini’s Fondmetal in the first round and only made it through by virtue of being the fastest loser. JJ Lehto’s Scuderia Italia and Marco Apicella’s Minardi lost out, leaving the final as a rematch between Tarquini and Herbert, with the Fondmetal driver once again coming out on top.

Herbert would have his revenge in 1992, however, defeating JJ Lehto in the final of what was a soaking wet event.

1993 saw a slight change of format. The five entrants – Martini in a Minardi, Alboreto and Barbazza for Scuderia Italia, and Jordan represented by Rubens Barrichello and test driver Vittorio Zoboli – first took part in a series of preliminary events, with the top four going through to the knockouts. The knockouts were also slightly different, with each match-up now being a best-of-three. Barbazza dropped out in the preliminaries, with Barrichello beating Martini 2-1 in the final.

There was no competition in 1994, and the return in 1995 only saw two teams taking part. Martini, Luca Badoer, and Giancarlo Fisichella represented Minardi, while Forti had cars for Zoboli, Andrea Montermini, and Giovanni Lavaggi.

Montermini was the only Forti to make it through the preliminary round, but he was beaten by Badoer 2-0 in the semi-final. Badoer went on to beat Fisichella (who’d topped the preliminaries) 2-0 in the final, giving Minardi its fourth success in seven runnings.

1996 saw a nice bit of diversity in the ranks as two new teams made their F1 Indoor Trophy debuts – both of which had actually won some races recently.

…While 1996 Monaco Grand Prix winner Olivier Panis was in attendance for Ligier, along with Shinji Nakano.

And as usual, Minardi took part as well, becoming the only team to have competed in all eight events. Lavaggi was back for another crack, with Tarso Marques as his teammate.

As it was, this turned out to be one of the more dramatic competitions in the series’ short history. Panis ended up having a massive accident in the preliminary stage which ruled him out of the rest of the event.

Teammate Nakano made it through the preliminaries, but also crashed his car in the process. Since Panis had already binned his, Ligier was unable to get a working car together for the knockout stages, so Marques’s Minardi ended up going through in Nakano’s place.

He was beaten 2-0 by Fisichella in the first semi-final, but the second semi saw a bit of a shock. Trulli lost the first run to Lavaggi and then had a crash in the second run, ensuring the Minardi driver’s unexpected place in the final, having seen off competition from drivers in cars that ran rings around the team in the actual F1 season.

Unfortunately, a fairytale win for Lavaggi and a fifth Indoor Trophy victory for the loyal and lovable Minardi squad wasn’t to be. Fisichella easily had the measure of Lavaggi (who’d actually replaced Fisichella at Minardi mid-season for sponsorship reasons) and won the final 2-0.

That proved to it for the F1 Indoor Trophy. For 1997, the competition was reworked into an event for Formula 3000 cars only and was last held in 2007.

But the F1 events remain a curio of Formula 1 history. They were competitions, run in contemporary Formula 1 machinery, and which didn’t count for any championship points. So that makes them the last non-championship races, right?

Non-championship races were a big part of the sport in the early days, but as things became more professional, they slowly faded away. The 1983 ‘Race of Champions’ at Brands Hatch, won by Keke Rosberg, is widely considered to be the last non-championship F1 race. But should that title belong to the 1996 F1 Indoor Trophy?

I don’t think so – the main reason being that they weren’t actually races, but effectively a series of time trials. They also had incredibly small entries and weren’t held under the governance of any major regulatory body. The 1983 Race of Champions was definitely the last time Formula 1 had a non-championship race, but the Formula 1 Indoor Trophy? Well, I guess you could say it was the last non-championship competition featuring contemporary F1 cars.

However you want to view it, the Indoor Trophy remains a delightfully odd piece of F1 history which inadvertently ended up celebrating some of the minnows of the sport, as well as providing us with a few unusual car and driver combinations.

Plus, anything which allows Minardi to be multiple winners has to be a good thing, right? 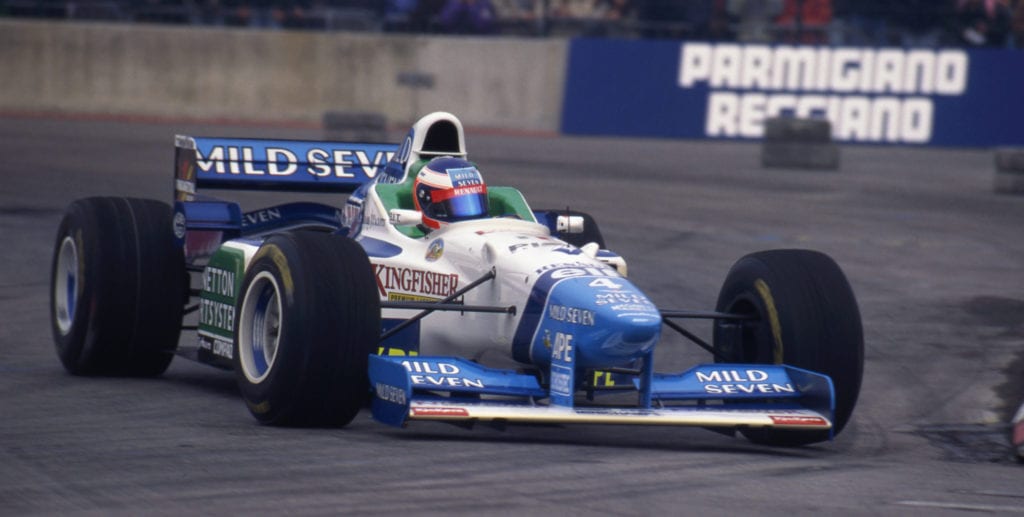 5 Weird And Wonderful Stories From Austrian GPs Of The Past

Here’s Eddie Cheever Having Some Awesome Battles With René Arnoux

An Umbrella Somehow Found Its Way Onto The Track In FP3