A Throwback To The Unusual F1 Mule Cars Of 2008

The concept of F1 cars struggling to follow each other due to dirty air is nothing new and it has been a complaint of drivers pretty much since wings were first put onto cars.

Things were particularly bad in the late-2000s. As regulations became increasingly strict, teams focused ever more on aerodynamics and finding new ways to generate downforce. In the space of a few years, cars went from being relatively sleek and simple-looking to winglet-festooned visual assaults. Just look at how the BMW-Sauber changed from the comparatively simple 2006 car, to the organised chaos of its 2008 challenger.

From a fan perspective, some love the aggressive way the 2008 cars look; it’s an easily identifiable visual representation of the technology and innovation that is such a core part of the sport’s DNA. Others (myself included) thought they were a hideous assault on the senses.

With such aero dependency, the racing was suffering. Sure, we had plenty of interesting seasons in the mid-2000s, but very little in the way of genuinely thrilling races outside of rain-affected ones. Change was needed and so for 2009, rule changes came in which dramatically changed the way cars would look.

Front wings would be made lower and wider, making them less susceptible to being affected by the aero wake of the car in front. Rear wings became taller and narrower to try and shrink the aero wake. Grooved tyres finally disappeared in favour of a return to traditional slicks, increasing the dependence on mechanical grips. And the winglets? Banned.

There was far more in-season testing allowed back in 2008 and so throughout the year, some teams started to run prototype versions of 2009 wing specifications on their 2008 cars.

We already knew from renderings and artists impressions at the time that the 2009 cars would look ‘different’ – and not necessarily in a good way. However, seeing photos of the new wings on actual cars proved to be a bit of a shock, especially as teams often only tested either the front or rear wing, bolted to the 2008 chassis to create something of a test mule.

Obviously, 2009 came and went, and the aero regulations continued until 2016, so although they looked weird at the time, we’ve become used to them through exposure. Those test cars with odd wings, though? They’ve become somewhat forgotten. And looking back at them, they are not pretty.

Williams was one of the first to try it out by sticking the 2009-spec rear wing to the 2008-spec FW30 during an in-season test at Jerez. The result? A car with two narrow wings that looks like something like a knock-off toy F1 car you’d see in a dodgy market stall at the seaside.

At the end of the season, more teams started to experiment with the different wings. Honda went the other way around to Williams and tried out the new wider front wing.

It’s such an odd contrast – you’ve got this curvy, swoopy body and a thin nosecone designed for the high front wings, but attached to it is a big, blocky 2009-spec wing. ‘Snowplough’ is a term that I remember being thrown around at the time.

McLaren went a step further, not only trying the new front wing, but attaching a version of its 2009-spec nosecone to Lewis Hamilton’s championship-winning MP4-23. Seeing what has become an iconic car completely devoid of the turning vanes and other aero devices looks incredibly odd.

One of the weirdest of all was BMW-Sauber, who actually went to the effort of producing a full-on interim car – the F1.08B – designed to replicate the 2009 aero.

A truly hideous machine, it sent us all into the winter worrying that the 2009 grid was going to be one of the ugliest of all time.

Thankfully, when teams revealed their actual 2009 cars and not just hodge-podge test cars, they looked a little better (well, some of them anyway) and had a diverse range of designs – from thin nose to fat nose, high nose to low nose. It was a nice surprise as teams worked out which approach was best, before they all seemed to converge a year or so down the line.

Like I say, though, it’s easy to look back at the 2009 cars with some reverence because we’ve got used to them. For instance, the Brawn car is a thing of beauty – not just because it was probably the prettiest car on the grid, but because of the story associated with it.

Looking back on those testing cars feels very disjointed, though. The Williams looks all kinds of wrong, and BMW’s interim car looks like a homemade plywood kit someone has put together in a shed.

The cars with the 2008-spec rear wings and 2009-spec front wings, though? I was a bit shocked by them at the time, but looking back now, I kinda like them.

And then it dawned on me why: the proportions aren’t too dissimilar to the cars of today.

Plus, it’s the only way the horrendous Honda RA108 actually looks half decent. 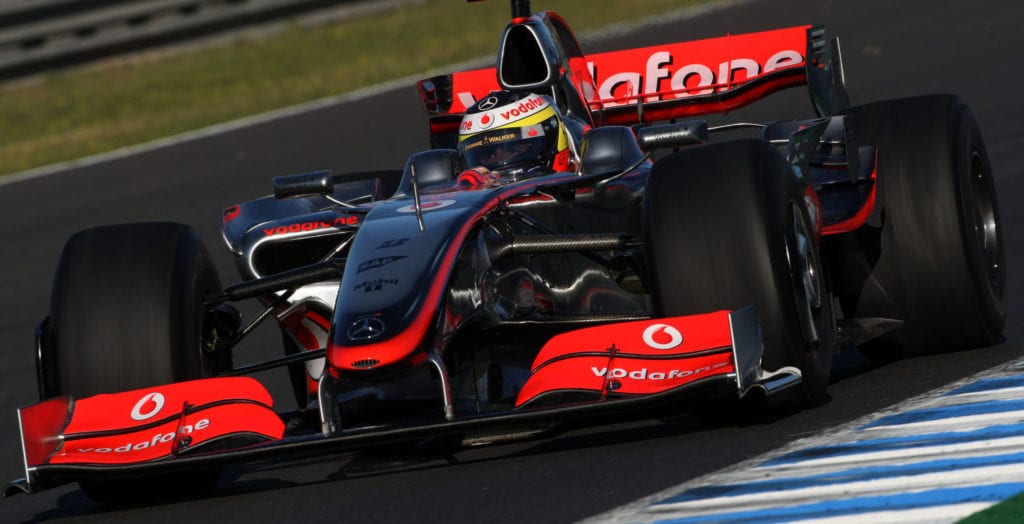