After it was recently revealed that a verified Aston Martin F1 TikTok page was actually a fake fan-run account, Alexa Rendell explores how they got away with it and what the future of F1 social media could look like.

In the last year, F1 TikTok has blown up. There are billions of views on the #F1 tag, 1.5 million followers for the official F1 account and some teams scoring thousands of views per video. So, it came as no surprise when Aston Martin seemingly jumped on the hype train.

Their first video was nothing extraordinary: a cropped version of the same clip that had been shared on Twitter and Instagram teasing the car launch. Unsurprisingly, it picked up a healthy 200,000 views.

From here, things only kept growing. The account quickly earnt verification and that elusive blue tick. They posted several videos with over 20,000 views and eventually racked up almost 30,000 followers.

The account was refreshingly good at interacting with fans. They always replied to comments, even resharing fan edits to their feed which we all know is quite unusual for teams.

However, with more followers came more attention, and one slightly cheeky comment directed towards Sebastian Vettel’s former team caught the eye of fans on Twitter.

And well, the Aston Martin Twitter admins took notice too…

It turns out, despite the account being verified on TikTok, it was a totally fan-run account pretending to be the team! Unbelievable scenes.

Now let’s be honest. They initially had many people fooled, with none more notable than the actual F1 account who commented on a couple of their videos and even tagged the team in one of their own TikToks.

Sorry to burst the bubble guys… but that's not an official @AstonMartinF1 channel! They sure have made it look like it though so thanks for flagging… we're looking into it now!

Their sneaky reposting, combined with that blue verification tag, did a lot to help make the account look real. Especially as, at the start, it seems like they weren’t really hiding their ‘true’ nature when they not-so-subtly hinted at being a fan account.

It’s notoriously tricky to get verified on TikTok, and there isn’t a way to ‘apply’ for it, so how exactly they managed to get it remains a bit of a mystery…

So, now what? Well, their verification badge has been taken away, and it remains a possibility that TikTok could take down the account.

Real or not, the admins of this account were genuinely good at engaging with fans, be it through simply replying to comments properly or regularly reposting edits to their account. It was really nice to see that level of engagement and appreciation towards the fans who are so loyal and supportive of the team.

Although, with the beauty of hindsight, this may have actually been because they didn’t have any of their own new content or footage to work with…

The love and popularity that this ‘fake’ account gained on the account should also be of real interest to the Aston Martin team. Especially as, judging by their car launch, they’re trying to reach a younger, British audience: an audience that already knows, uses and loves TikTok.

The app is already filled with incredible and entertaining F1 content creators.

Having more teams on TikTok will help the motorsport community grow and introduce the them to new talent and ideas that will benefit them across all their social media platforms.

If done right, you can have a lot of fun and build special relationships with fans on TikTok, and this fake Aston Martin admin was doing a pretty good job at getting it right.

It also wouldn’t be a totally rogue move for them to launch an official account. Most major American sports teams are regularly posting on there. Red Bull Racing has had plenty of success with their videos, and even constructors’ champions Mercedes have an account despite not uploading anything yet.

Aston Martin might also have some history on the app, or more specifically, Racing Point does. TikTok didn’t verify them – but at this point, that clearly doesn’t mean a lot – and their content was so varied and limited, there are questions about its authenticity too.

If it was another fake account, it shows that fans are desperate for teams to get on this new and exciting app – whether they want to be there or not!

After all, whoever is currently running the account is doing a pretty good job for them – this may well have just been the most elaborate F1 job applications ever. 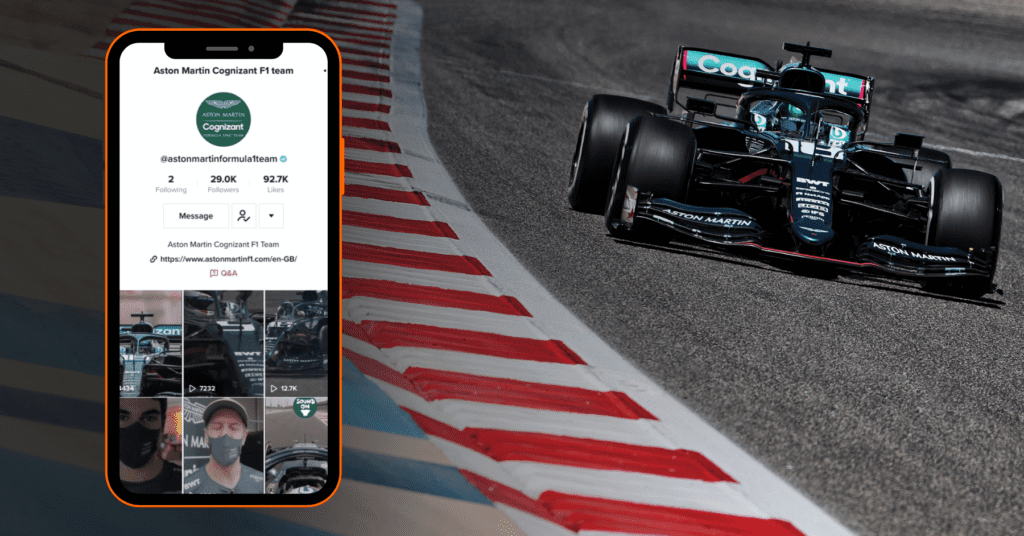