Adrian Newey’s First Formula 1 Car Is Up For Sale

Before he was designing Sebastian Vettel’s dominant Red Bulls in the early 2010s, before he created the fast but fragile McLarens of the early 2000s, and before he helped Williams to conquer all in the 1990s, Adrian Newey worked for a small midfield team with a striking Cyan livery – March. Hey, even legends have to start somewhere small.

Well, technically, Newey’s first F1 team was the Fittipaldi team in 1980. He also joined Haas Lola in 1986, but the team went bust before he could have any impact. Ross Brawn also worked at Haas Lola: just imagine what the two of them could have done together…

Anyway, back to March. The team had some minor success in the early 1970s before disappearing from F1 in 1982. March was back in 1987 and decided to bring in Adrian Newey, who’d had success in the developing the manufacturer’s IndyCars during the decade.

For 1988, Newey penned this, the sleek 881, an example of which has recently popped up for sale.

It’s an absolute looker, isn’t it? And that’s a good thing because unfortunately, if you want it, the only thing you’ll be able to do at the moment is look at it. Yes, because of the whole lockdown thing, but also because it doesn’t come with an engine. Ah.

The plus side is that in period, this car was powered by a 3.5-litre V8 Judd engine, and Judd still makes engines, so sourcing one shouldn’t be too difficult. It does at least have the gearbox and other components, though.

The price? Unfortunately, it’s listed as ‘POA’, which normally means it’s expensive. Then again, it’s an F1 car, it’s going to be costly – if you were thinking you could part exchange your Vauxhall Corsa and get your hands on a March 881, then think again.

As I’m sure you know, 1988 was a tough season if you were a team other than McLaren, who won 15 of 16 races that year with the MP4/4. It was also a tough year if you were a team who’d elected to forego the powerful turbo engines in favour of a naturally-aspirated unit in preparation for the ban on turbos the following year.

As a small team without a whole lot of money or resources, March was one of those teams. But despite using the underpowered Judd engine, the 881 punched well above the team’s weight, thanks mainly to having many of the hallmarks of later Newey designs: well-packaged, incredibly efficient aerodynamics.

As the year progressed and the car developed, the 881 started to emerge as not only the best non-turbo car, but one which was capable of fighting with the turbos – and yes, on occasion, even the mighty McLarens.

At the Belgian GP, Ivan Capelli grabbed the team’s first podium since 1976, when he finished third – albeit as the result of both Benettons being disqualified at a later date. Two races later in Portugal Capelli put on a true demonstration of the potential of the 881. After qualifying third, he ran with the McLarens for the entire race, passing Ayrton Senna to take second where he remained until the finish.

It was a seriously impressive result which highlighted just what an impressive package the car was. There’s even a story from one point earlier in the weekend where Alain Prost followed Capelli into Estoril’s long, fast Parabolica corner, saw the speed Capelli was carrying, and backed off because he thought there was no way the car would be able to take the corner at that speed without crashing.

Two races later in Suzuka, Capelli became the first person in five years to officially lead a lap of a race in a naturally-aspirated car, when he briefly passed Prost.

Thanks to the efforts of Capelli and teammate Mauricio Gugelming, at the end of the season March had managed an impressive sixth in the Constructors’ Championship, with Capelli seventh in the drivers’ standings. Of the non-turbo teams and drivers, only Benetton and Thierry Boutsen were ahead of them.

Newey’s design of the 881 influenced the aero design of a number of other teams, and many of the features on the March can be seen in the Williams FW14 – a car Newey designed when he left the team (then known as Leyton House) to join Williams in 1990.

Once Newey left, the team’s success dried up and they eventually folded after the 1992 season. But its legacy can’t be ignored and in terms of design, the 881 is arguably one of the most important cars in F1 history. Why wouldn’t you want to own one? 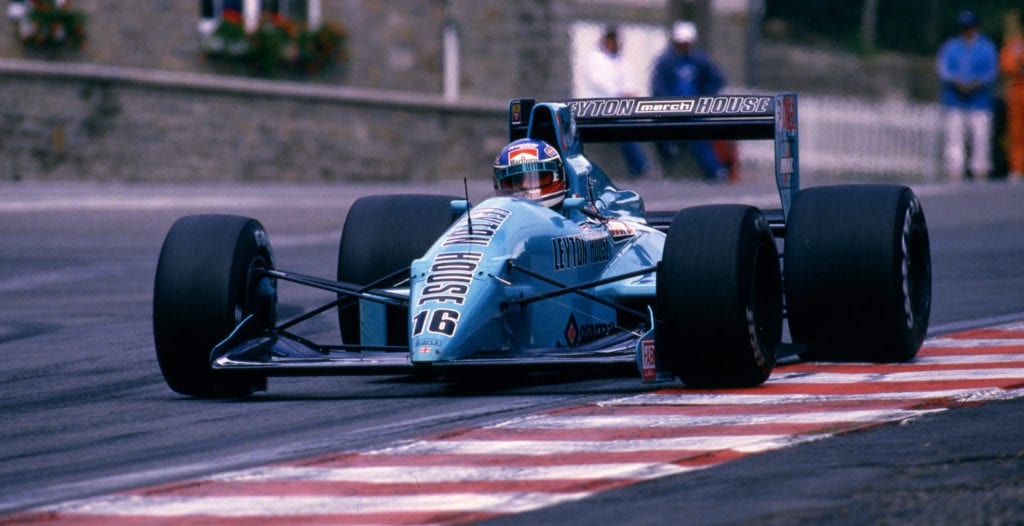