Almost All The Formula E Grid Ran Out Of Energy On The Final Lap Of The Race – WTF1
Skip to content
×
Formula E , News , WTF
6 comments

It’s often joked about. What happens if Formula E cars run out of battery during a race? Don’t get us wrong, it can happen and we have seen several drivers lose out on race wins and podiums for running out of energy. It sucks.

However, today during the Valencia E-Prix Formula E took ‘running out battery’ to a whole different level. With FIVE safety cars being brought out during the wet race, it became apparent with just a couple of laps to go that the energy left versus the laps remaining didn’t add up.

In short, half the grid ran out of energy on the last lap. Nightmare. The rules in Formula E state that for every minute under a safety car, the energy a driver can used is reduced by 1kWh.

Pole sitter Antonio Felix da Costa completed a total masterclass in race domination during the race, however it soon became apparent at the end of the race there was a serious problem.

With each Formula E race being 45 minutes plus one lap, da Costa crossed the finish line and then realised he needed to complete another lap of the Valencia circuit on 1% energy. If you’re new to Formula E, that’s asking the impossible.

Now, it is possible to get energy back during a Formula E race. For example, braking energy can be recovered by regen during a race. However, managing the energy in the first place is just as important.

In Valencia, a circuit Formula E has never raced at before, only 12 drivers have been marked down as finishing the race. Even then, it wouldn’t be surprising if even more drivers are disqualified from their result for overuse of power post-race.

The finish… but not the finish. This is why energy management is perhaps THE most important aspect of Formula E#DHLValenciaEPrix @DHL_Motorsports pic.twitter.com/nDeYQvK08H

According to the current results the Mercedes of Nyck de Vries takes his second victory of the year, after saving more energy than rival da Costa and passing the current Formula E champion on the final lap of the race as he was forced to slow.

In second is the Dragon of Nico Muller who started the race in 22nd place and has never made a trip to the Formula E podium before. In fact, Dragon themselves have just secured their second podium finish in the last five years of Formula E. That just shows what a totally insane result this was.

Completing the podium trio was Stoffel Vandoorne who started from the back of the grid. Yep, the very last spot. Although Stoff was due to start on pole, he was disqualified just an hour before the race got underway due to “technical documentation” as his qualifying tyres weren’t ID’d properly.

There are another nine drivers who are included in the final race classification, including that of pole sitter da Costa who finished up in P7.

Before the last lap horror show, things were still fairly chaotic in true Formula E style. Rain was causing extra drama with the race yet again starting under safety car, followed by Andre Lotterer pulling another ignorant overtake and bringing out an early safety car for bashing into Sebastien Buemi and ruining his race. Add in some extra cars beached in gravel traps and early retirements and you can imagine what a mad race it turned out to be.

Everyone seemed to be changing position on track, which made for some great overtaking action, but this whole race will be totally overlooked for this energy overuse at the end of the race.

Final classification will probably not be available for a while.

The one saving grace Formula E has is that we are coming back to do it all again tomorrow for another Valencia race.

Let’s hope we don’t get any deja vu… 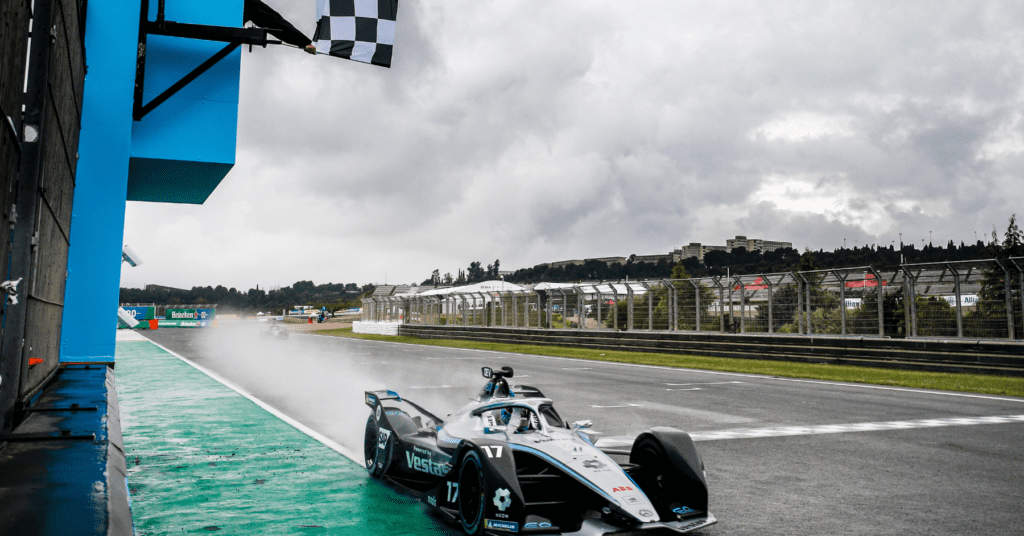