Alonso Felt “Humiliated” When He Discovered McLaren-Honda Would Suck In 2017 – WTF1
Skip to content
×
Formula 1 , News

After a difficult first year of the McLaren-Honda partnership in 2015, things improved in 2016 and we were all expecting another step forwards in 2017.

However Honda decided to start it’s engine programme pretty much from scratch again, which meant that the team ended up back at square one in terms of performance and reliability.

Alonso’s frustrations boiled over pretty much from the word go and he was very vocal about his displeasure with the whole situation. Eric Boullier said that’s because Fernando set his expectations high for the season and struggled to come to terms with the fact he was in for another year of misery. He told Autosport:

“As a competitor, he is making his mental preparation over the winter and he is drawing in his head how the season should be, and that even motivates him more because he tries to stick to his own goals. So turning up in Barcelona, and having been backwards in terms of engine performance, it is a mix of sadness, humiliation and frustration. It is not good.”

It got so bad that Fernando decided that he’d prefer to do the Indy 500 than race at Monaco, and on a few occasions even retired a car that had nothing wrong with it because he couldn’t be bothered to drive around near the back with no hope of achieving anything meaningful.

The one race where Alonso had a real chance to do something was in Singapore, where he’d qualified well and there was rain on race day. But after being taken out at turn one he was so angry that he punched a hole in the wall of his motorhome. A pretty extreme reaction, but Boullier reckons it’s the sort of thing he’d do even if he won.

“Sometime he has to express his frustration, but he has been like in the past even winning races. He is so tense after a race. He has this rage inside him that he knows he can do better. He knows he can be the best. And he needs to show it. And I think if he wins, he will also punch a wall.”

Boullier also said that Fernando’s determination puts pressure on the team to deliver.

“I always compare him to a shark. When he can sense the blood, he goes straight there. And that is why if he feels he can be on the podium or competitive enough to be there, he will not give up one inch to anybody. So the pressure on the team will be there, but it is a good pressure.”

Several times throughout 2017 Alonso has said that the McLaren chassis would be good enough to win races if it didn’t have a Honda engine. Now the team has Renault power, I guess we’ll see whether or not his predictions were true! 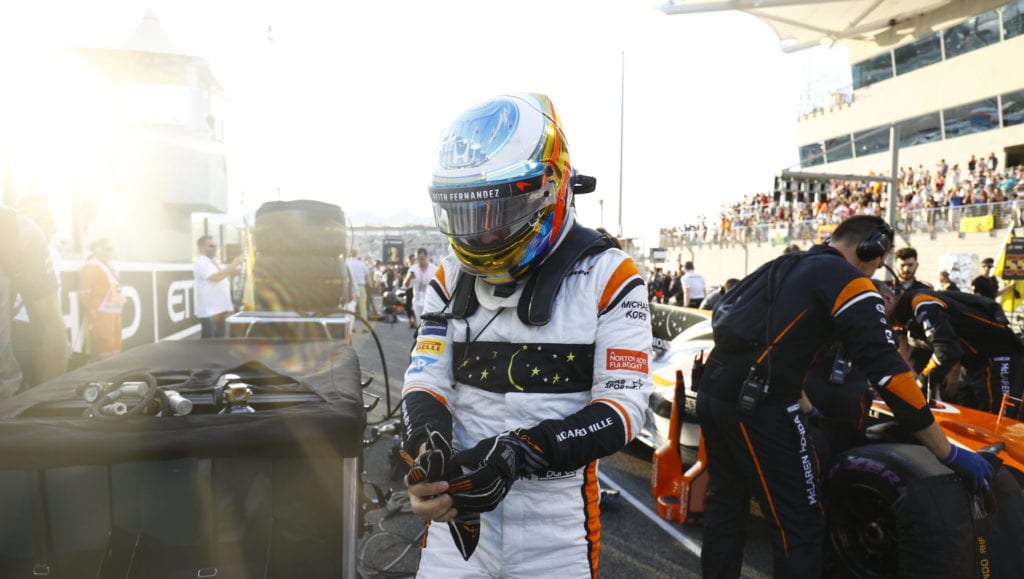