Alonso Gets A Champion’s Salute As He Finishes His Final F1 Race – WTF1
Skip to content
×
Formula 1 , News

After a typically battling drive, Fernando Alonso signed off his F1 career with a lowly 11th place. It’s a pity it wasn’t a points finish in his final race but the cooldown lap was a little bit special.

Fernando completed it flanked by Lewis Hamilton and Sebastian Vettel with the three drivers heading to the pit straight to do donuts. It was a mega sight – sure, Fernando hasn’t featured at the front for years, but he’s still surely up there with Lewis and Sebastian as one of the three best drivers of the last 10 years or so. Race finish be damned, it was only fitting that he should finish his career being held in the same regard as those two. Fans also voted him the driver of the day – a nice touch.

Lewis Hamilton won the race despite making an early pit stop under the Virtual Safety which left him in tyre management mode for most of the race. Sebastian Vettel tried his best to catch him but just didn’t have the pace, while Max Verstappen recovered from a poor start caused by an engine problem to come home on the podium, denying his teammate a final Red Bull-flavoured shoey. Valtteri Bottas had to stop twice and finished a distant fifth while Kimi Raikkonen’s Ferrari career ground to a halt on the pit straight after just a few laps.

Best of the rest went to Carlos Sainz who put in a quietly brilliant performance to take sixth in his final race for Renault – a result which also elevates him into the top 10 in the championship, displacing Alonso.

Charles Leclerc held off Sergio Perez for seventh, with the two Haas’s of Romain Grosjean and Kevin Magnussen rounding out the points.

It was a race of weirdly high attritions – as well as Raikkonen breaking down, Pierre Gasly, Esteban Ocon and Marcus all failed to finish. Nico Hulkenberg did too – not because his car failed, but because Grosjean flipped him into the barriers on the opening lap, leaving him “hanging like a cow”, whatever that means!

With most of the championship battles sewn up there was a real ‘end of term’ feeling about the race, with lots of drivers seeming quite relaxed and enjoying what has been a long and eventful season.

Was it the most memorable race? Not really – Verstappen’s move on Bottas was absolutely incredible and there were some good midfield scraps. But as a send-off for Alonso, it was kinda fantastic. The sport will miss him greatly, even if he isn’t quite as upset that he’s leaving as we all are! 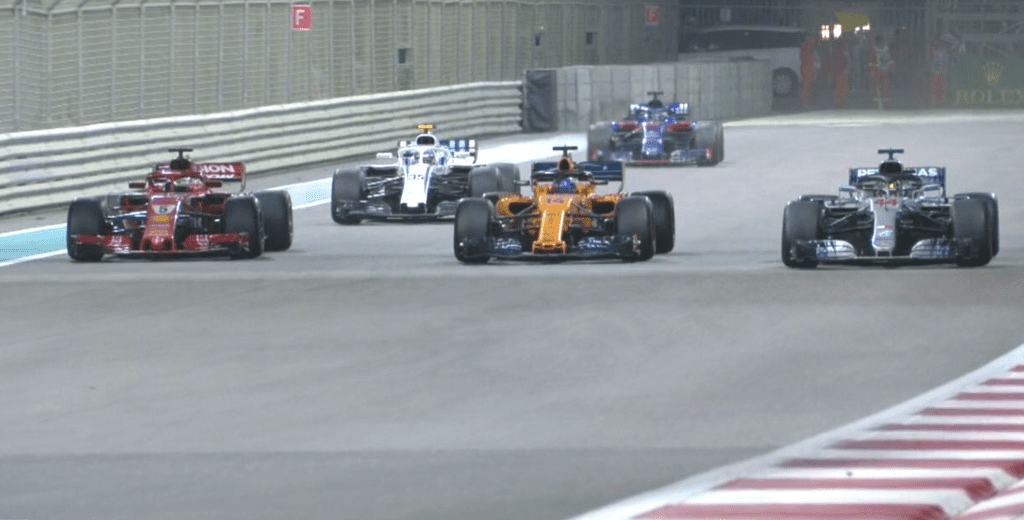