After what seems like years of rumours, Fernando Alonso has finally been behind the wheel of an LMP1 car when he tested the Toyota TS050 Hybrid in Bahrain.

After regular driver Sebastien Buemi did 10 laps of setup work on the car, Alonso jumped in and pounded around for much of the rest of the day, completing 113 laps.

Unlike when he first tested an IndyCar there wasn’t a whole lot of coverage of the day (annoyingly) and Fernando kept quiet with his comments until the end of the day. He seemed pretty happy to have experienced an LMP1 car for the first time, though. He said:

“It was a great day. Testing an LMP1 car is always a nice thing for any racing driver because these cars are amazing to drive. They are very consistent throughout a stint which is a positive thing. I have wanted to test a car like this for a long time now and today I could achieve that so I am happy.”

Fernando’s best lap was nine tenths slower than the time Buemi set earlier in the day, and seven tenths down on Formula V8 champion Pietro Fittipaldi, grandson of Emerson, in the Porsche 919.

Toyota boss Pascal Vasselon was keen to stress that lap times weren’t the objective of the test though, and praised Alonso’s approach:

“Quite a good day. I think Fernando has achieved more than 100 laps, so more than during a Formula 1 weekend. All good. We did not do any low-fuel runs, we did not do any qualifying runs. There was no trophy to win. We’ve done a full tank all day long and working as much as we could.

“I think he enjoyed it. But you have to ask him! I’m sure he has enjoyed it. He spent a lot of time already with the engineers. He’s very keen to understand our systems.”

So it all went well, but the question we all want to know the answer to – will he race at Le Mans? – looks like it’s going to remain unanswered for a while longer yet. 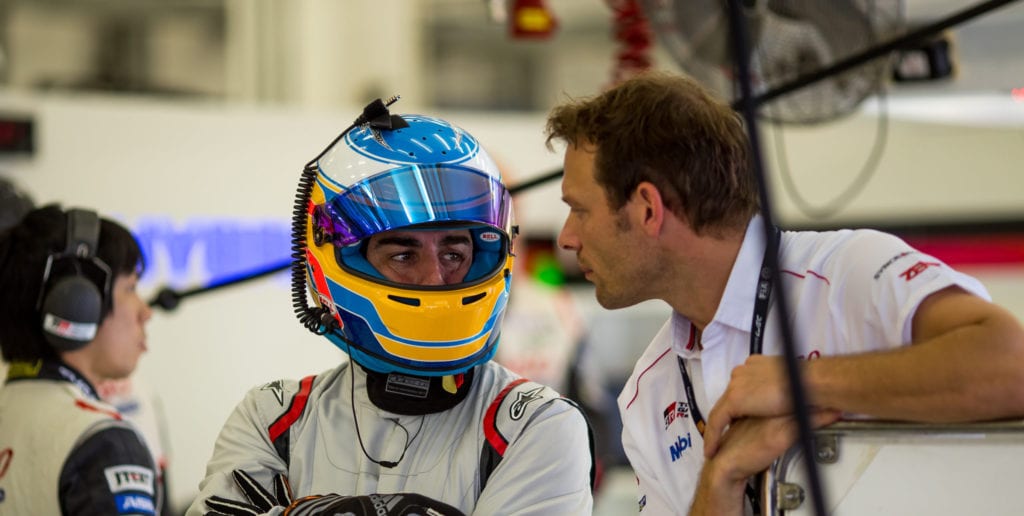