Alonso Is Just One Of Many Legendary Drivers Who Have Failed To Qualify For The Indy 500 – WTF1
Skip to content
×
Formula 1 , Indycar

There are many reasons why Alonso was unable to qualify for the Indy 500 – but his driving skill wasn’t one of them. Car setup, track conditions, ambient temperature, and simply being with the right team are all sizeable factors in being able to string together 16 left-hand turns fast enough to make the grid and over the 108-year history of the race, a number of hugely talented drivers with massive success behind them have failed to do just that.

Let’s start with a couple of big pre-war names. Tazio Nuvolari – one of the greatest racing drivers of all-time – was entered into the 1946 Indy 500 but chose to withdraw following the death of his son. Another great driver and rival of Nuvolari’s, Achille Varzi, took his place but failed to qualify the uncompetitive Maserati. Another legend, three-time European Champion Rudolf Caracciola, was also entered in the race, but didn’t make the grid after he crashed during qualifying.

Formula 1’s first world champion Giuseppe Farina also had a crack at Indy in the mid-1950s when his F1 career was winding down. In 1956 he failed to qualify a Ferrari-engined Kurtis Kraft chassis after being caught out by wet weather, and the following year he withdrew from the event when his teammate Keith Andrews was killed during testing.

Rodger Ward may not be a familiar name to F1 fans, but in the late 1950s/early 1960s he was perhaps the driver to beat – between 1959 he won twice and never finished lower than fourth. That made it all the more surprising when he simply wasn’t fast enough to qualify for the 1965 race.

Pedro Rodriguez raced – and won – in pretty much every type of vehicle he got his hands on during a career that was cut all too short. That didn’t include the Indy 500, though – in 1963 he entered an Aston Martin-powered cars (of all things!) but didn’t qualify. Chris Amon, perhaps the greatest driver never to win a grand prix, was unable to qualify in 1967 and when he returned in 1970, he saw teammate Denny Hulme get badly burned in a crash. The danger of the race suddenly dawned on him, he lost all confidence and withdrew.

Three-time Indy 500 winner Johnny Rutherford (two of which were with McLaren) failed to make the grid on the last three occasions he entered the race in 1989, 1990, and 1992 – then again, he was over 50 at the time, and only driving on a part time basis.

1986 winner and three-time (and reigning) series champion Bobby Rahal was attempting to compete in the 1993 race in a car his team had designed itself, rather than using one of the Lola or Penske cars. The car wasn’t especially quick but it had done alright in other races that season, making it all the more surprising when he failed to qualify.

The biggest shock, however, came in 1995. It’s a loose analogy, but Penske is to IndyCar what Ferrari is to F1 and the idea of two Ferraris failing to qualify for a race is unthinkable – and yet, that’s exactly what happened to Penske.

With Emerson Fittipaldi and Al Unser Jr – both former champions and between them, the winners for the last three years – driving the cars, talent wasn’t the issue. But the team struggled with chassis gremlins for the entire month and Unser simply couldn’t find the speed while Fittipaldi was bumped from the last row on the final day of qualifying.

There are a few other famous names who were entered for the race and didn’t start for reasons other than a simple lack of pace. Alberto Ascari had to withdraw in 1953 because his car wasn’t ready in time and in 1958, Juan Manuel Fangio scraped onto the back row in an uncompetitive car, but withdrew because he only wanted to race if he felt he could win.

Bruce McLaren was entered into the 1968 race driving a turbine-powered car entered by Carroll Shelby, however, when Shelby discovered the car had some rule-bending features he withdrew the entry in order to avoid a scandal, leaving McLaren without a drive.

Nelson Piquet was set to make his Indy 500 debut in 1992 but had an enormous crash during practice which left him with nasty foot and ankle injuries and had to pull out of the event.

That’s some pretty impressive company for Alonso to be in – even if you just include the pure non-qualifiers. The only slight worry is that of all the great F1 drivers who DNQ’d, none went on to bounce back and win the race in subsequent years. It’s down to Fernando to buck that trend… 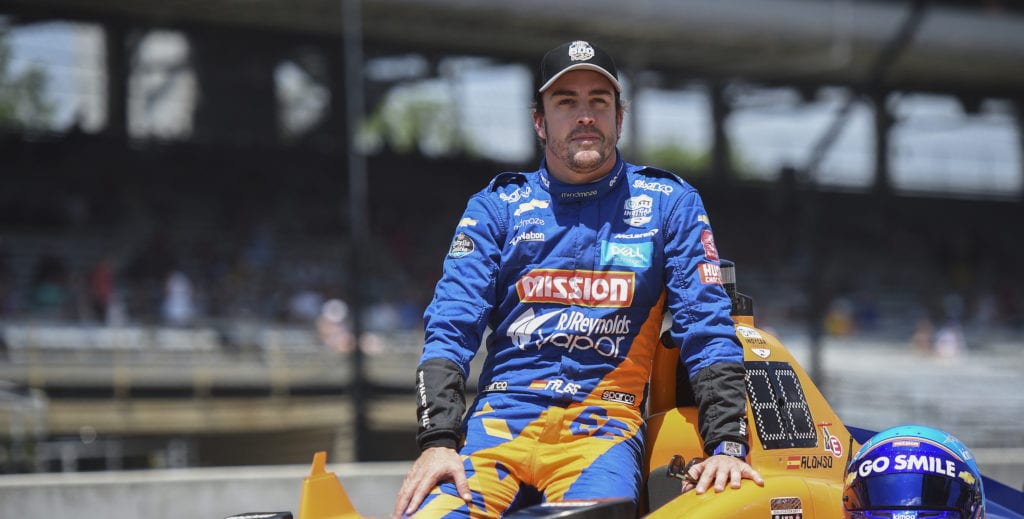