Alonso Wanted To Stay On The Podium All Night After WEC Win – WTF1
Skip to content
×
Endurance , News

Despite coming under immense pressure from the sister #7 Toyota car, Alonso held firm in the last hour of the race at Spa-Francorchamps in order to take his first win since the Spanish Grand Prix on 12 May 2013. The #8’s victory also ensured four wins in a row – a streak that started at the 6 Hours of Fuji last year – for his team-mates Kazuki Nakajima and Sebastien Buemi in the series.

Post-race, Alonso spoke about a “fantastic debut” and hailed the efforts of Nakajima and Buemi, who inherited pole position after Mike Conway and Kamui Kobayashi’s Qualifying efforts were voided due to fuel flow infringements.

“It was a nice debut, definitely. In the race I think we led basically all the laps. We had three safety cars with regroup, so we lost the advantage we had, but we just kept the position until the last lap.

“Fantastic debut, first endurance race in the world championship, amazing job by the team, 1-2 in qualifying and 1-2 in the race. Kazuki, and Sebastien in the start, made my life a little bit easier.”

Alonso also said about his relief in returning to the top step of the podium, joking about the karting races he has won in the same time frame.

“I was saying to the guys, this is so nice to feel the podium, I will be here all night long. Pick me up in the morning, I will try and sleep here!

“I won in go-karts a couple of races! In an FIA World Championship, in F1 it was a couple of years ago in Spain, with Ferrari still.”

Alonso has turned to Toyota in order to compete in – and win – the 24 Hours of Le Mans, as part of his Triple Crown bid. It is unknown if he will return to the Indianapolis 500 next year, after suffering an engine failure when running at the front on his series debut last year.

Alonso seemed content with a “good first experience” in endurance racing, but admitted that due to the #7 car’s troubles, the trio approached the race in a conserved manner.

“It was good. It was a little bit mixed, with the traffic and the car balance, we struggled a little bit with oversteer, but I think it was a good first experience.

“It was tricky, performance-wise, we took quite a safe approach to the race, knowing that we were in a good advantage, but with the safety cars probably that advantage went. It wasn’t the quickest and we had to fight until the end. But the team is amazing. I think we executed the race to perfection.”

He’s now taken his first win in five years, but can he take his first championship title in 12 years? Let us know in the comments below. 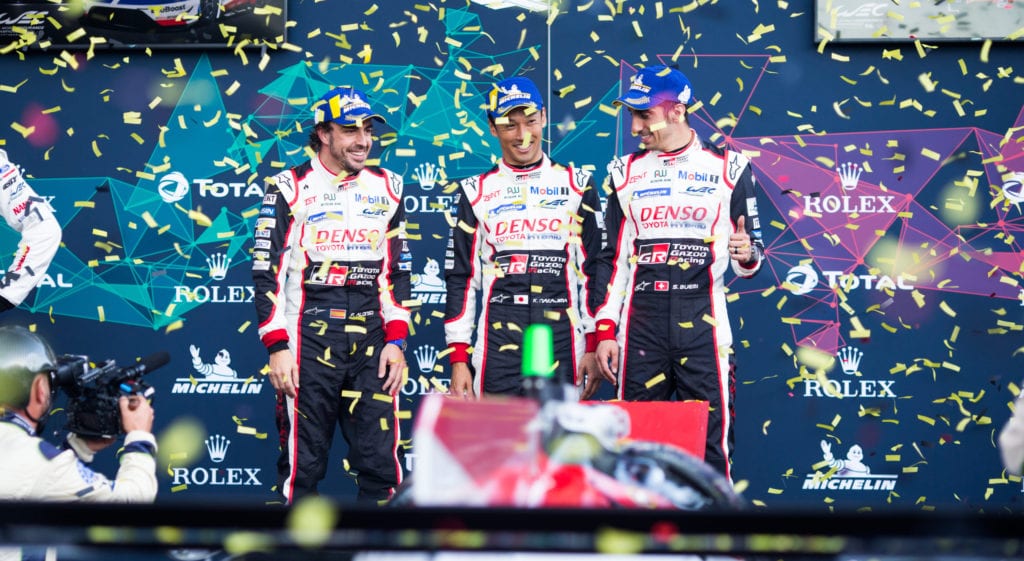