Alonso Watches F1 Podium From Deckchair, Next To A Painting Of His Meme – WTF1
Skip to content
×
Formula 1 , Fun

Alonso Watches F1 Podium From Deckchair, Next To A Painting Of His Meme

He may not have finished on the F1 podium at the Hungaroring, but Alonso absolutely bossed the Hungarian GP with a sixth-place finish. On his birthday weekend, too.

Not only that, but he also – somehow – set the fastest lap of the race. In a McLaren Honda. We’ll let that sink in for a moment…

Of course, F1 heads off on the summer break pretty soon, with the factory shutdown coming up after the Hungaroring test – which takes place next week.

As Sebastian Vettel, Kimi Raikkonen and Valtteri Bottas celebrated on the Hungarian GP podium, the camera captured something rather hilarious taking place.

In parc ferme, there’s a giant painting of a beach, with Alonso lounging on it in his now infamous deckchair. F1, embracing a meme? That can’t be right?

Well, after the race, Alonso headed down to watch the podium. In a deckchair. Next to a painting of himself in a deck chair. Holding a sign.

It was absolutely brilliant. Amazing scenes.

Check out the Alonso deckchair t-shirt in our shop now and use the code WTF10 to get 10% off! 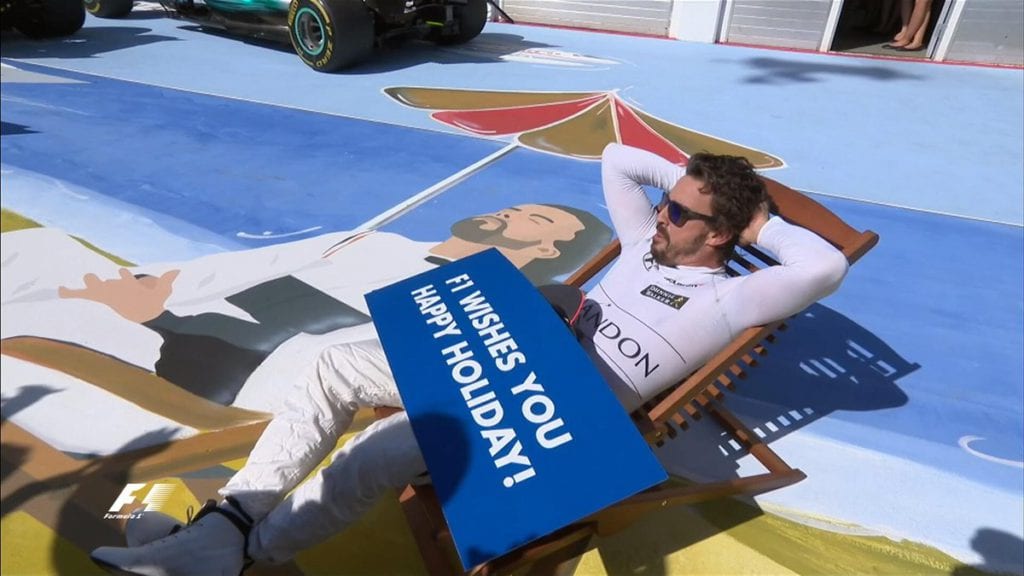