Alonso initially joined Toyota to pursue motorsport’s fabled Triple Crown, the round-the-clock being a pivotal part of said achievement, along with the Monaco Grand Prix and the Indianapolis 500. Having won the race in 2018 alongside ex-Formula 1 colleagues Kazuki Nakajima and Sebastien Buemi, ending Toyota’s long-standing poor luck at Le Mans, the crew now looks set to take the 2018-19 World Endurance Championship crown with just Spa and Le Mans to go.

However, Alonso is not necessarily saying goodbye to Toyota. The two-time F1 world champion has expressed an interest in taking on the Dakar Rally, having tested a Hilux in South Africa last month.

Alonso explained in a statement that he believes it’s a good time to try “new challenges” and wished Hartley and the rest of the No.8 crew the best for next season. He said:

“I have enjoyed being part of Toyota Gazoo Racing in WEC but this chapter is ending. Winning Le Mans is one of the highlights of my career as part of my Triple Crown challenge and I will always remember that victory which we achieved together as a team last year. Now is a good time to take on new challenges and there are many interesting opportunities to explore within Toyota Gazoo Racing. I wish Brendon all the best for next season and I would like to thank all the team members for the big effort they continue to make to achieve success in WEC.

“We still have two important races remaining as we are still in the fight to become WEC champions and I will be pushing hard to win both of them. I would love to put an end to this super season by celebrating a new world title with all the Toyota Gazoo Racing family. Finally, I’d like to take the opportunity to say thanks to all WEC and ACO members for such a warm welcome and experience.”

Former Toro Rosso F1 driver and Porsche Le Mans winner Hartley said that he feels that he returns to WEC action as a “stronger driver” from his time in F1, a series that he still believes that he has “unfinished business”, having lost his seat to Alexander Albon for 2019.

Toyota also expressed its “sincere thanks” to Alonso in contributing to a major event in its racing history, with team president Hisatake Murata saying:

“I would like to welcome Brendon to Toyota GAZOO Racing. For many years we have respected him as a tough competitor but now I am excited to have him as a Toyota colleague. He is a team player so I expect him to fit in very quickly and become a valuable part of our team.

“On the other hand, I am sad to say goodbye to Fernando and would like to thank him a lot for his contribution to this fantastic season during which he has written his name in Toyota’s motorsport history. His passion, desire to win and willingness to chase his dreams is truly impressive. We will enjoy working together for the final two races when I know we all share the same target of winning Le Mans and both World Championships.”

Alonso will aim to complete his Triple Crown dream and join Graham Hill at the Indy 500 with a Carlin/McLaren/Chevrolet entry later this month after retiring with Honda engine woes (familiar?) in his first attempt two years ago.

The most interesting aspects of this announcement are the “other opportunities” with Toyota that he hints at. Dakar Rally? WRC? Nurburgring 24 Hours?

Or maybe he’s just clearing his schedule for an F1 comeback? 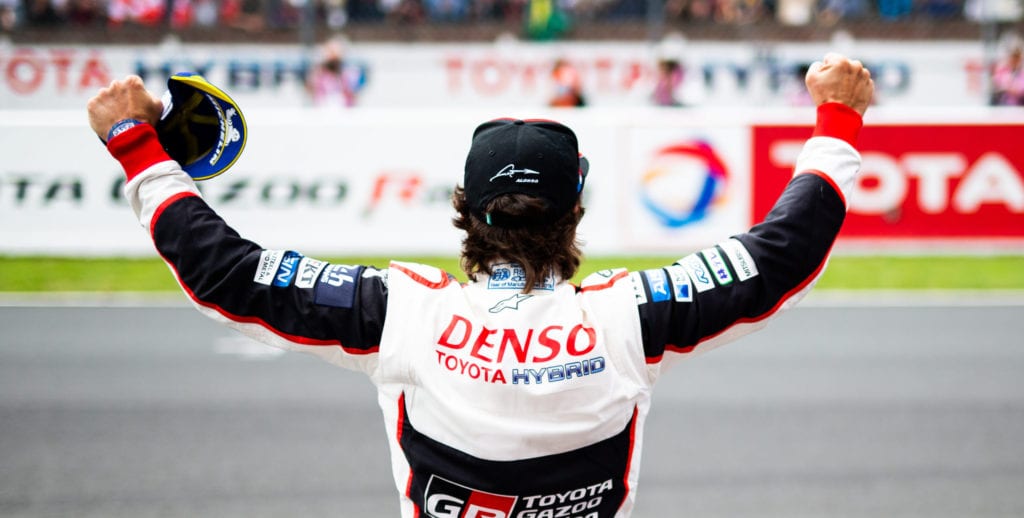