An Ecstatic Kvyat Says His Podium Makes Up For The “Difficult” Last Three Years – WTF1
Skip to content
×
Formula 1 , News

Of all the many superb drives in the German Grand Prix, it was hard to be happier for anyone than Kvyat. As well as celebrating the birth of his daughter, finishing third marked a huge positive step in one of the most bizarrely up-and-down F1 careers in recent times.

He made his debut with Toro Rosso in 2014, joined Red Bull after a single season, then got demoted back to Toro Rosso four races into 2016 to make room for Max Verstappen. His mindset crumbled and during 2017 he was dropped, brought back, and then dropped again – seemingly for good this time – before spending last year as a simulator driver for Ferrari.

Daniel Ricciardo’s shock move to Renault paved the way for a Toro Rosso comeback – partly because Red Bull ran out of fresh young drivers to put in its cars, and partly because Kvyat was always a raw talent who just needed to settle down and find some focus.

This year, he’s done exactly that, putting in a number of solid performances and showing well against Alex Albon, who’s also been thoroughly impressive in his rookie season.

If the Kvyat of 2017 had been racing in the German GP, he’d probably have thrown down a few quick laps and then stuffed it in the wall. 2019-spec Kvyat was patient, restrained, and when his chance did come, he grabbed it with both hands. It was proof that not only did he deserve another shot at F1, but that Red Bull and Toro Rosso were right to give him yet another shot. Kvyat knew it, too – responding to Crash.net in the press conference after the race, he said:

“It was an incredible few years in my life. A lot of realisations in my life because it was sometimes tough times and I thought maybe Formula 1 was over for me, and maybe I thought, especially podium, I would never ever have it again, but life just proves that if you work hard and never give up, things are possible. I think that’s exactly what happened today.

“Even the race was tough for everyone, I managed to keep it cool and just… all these three difficult years, just felt like they crashed from my shoulders finally. I lost these chains today. It was hard work to reach this moment and hopefully I can send the message out there that I’m ready now to fight for this kind of moment on a consistent basis – and there is no stronger message than a podium like this.”

Those are some very pointed words. Although Pierre Gasly has been showing signs of speed of late, they’ve been exceptions rather than a trend. At Hockenheim, he spent most of the race scrapping in the lower reaches of the top 10 while Verstappen won, Kvyat finished third, and Albon ran as high as fourth, battling with Lewis Hamilton (despite starting 16th) before defeating Gasly in combat as he finished a career-best sixth.

Kvyat is only the second driver to score a podium for Toro Rosso after Sebastian Vettel. Yes, he’s had more races for the team than anyone else, but when you think of some of the quality racers who’ve driven for Toro Rosso over the years – Verstappen, Daniel Ricciardo, Carlos Sainz, Jean-Eric Vergne, Sebastien Buemi – that’s still mightily impressive.

However, even after all he’s gone through with the team, Kvyat said that he has no issues with Dr Marko and his management style:

“He is always tough on you but he’s always – most of the time – he’s right. And maybe at first it’s hard to take but then you analyse and you improve, simple as that. He always give you the opportunity if you deserve it and I’m very thankful for him.”

If Hungary is similarly disappointing for Gasly, then Helmut Marko and Christian Horner might have some tough (or perhaps easy) decisions to make during the summer break. Never mind whether or not he keeps his seat for next year – it wouldn’t be surprising if Red Bull dropped him back to Toro Rosso before the season is even through. If that is the case, then Kvyat – with his years of experience, knowledge of the team and recent good performances – would surely be in prime position to benefit. Is he ready to make the step up again?

With comments like these, yes – and he knows it. 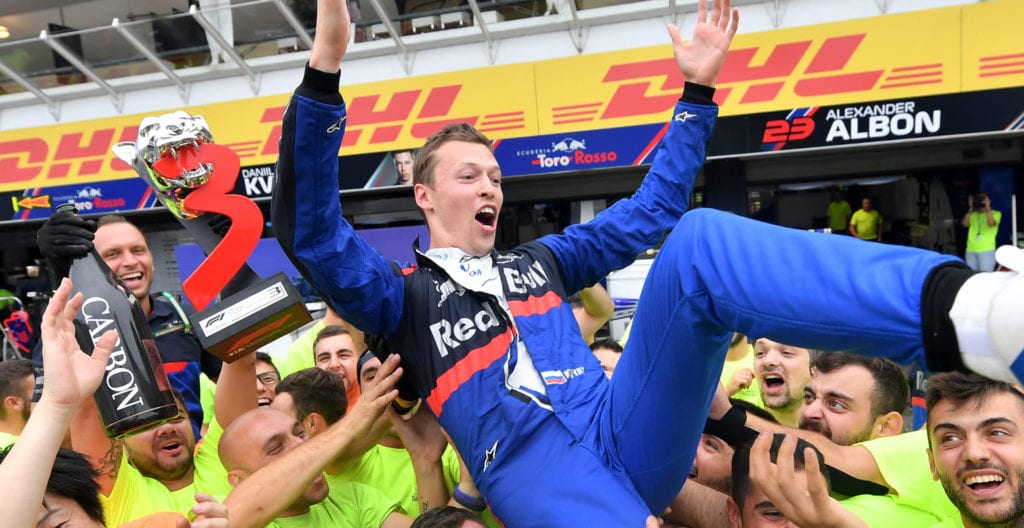