Andretti’s Incredible Laps On Slicks In The Wet Show Some Of The Best Car Control We’ve Seen – WTF1
Skip to content
×
Indycar , Onboards

The Belle Isle circuit is difficult enough in the dry thanks to its surface changes and severe bumps, but a heavy dose of rain ahead of the race made the track absolutely treacherous.

After a lengthy delay, the race finally got underway over a shortened distance and before long, a dry line started appearing. Andretti hadn’t been having the greatest race so he was the first driver to gamble and come in to swap his wet tyres for slicks (there are no intermediates in IndyCar). It was a crucial moment of the race as his pace would dictate when the rest of the field might pit and, if it went well for Marco, a well-timed caution period could rocket him up right up the order.

But, instead of focusing on a battle at the front and leaving it to the commentary team to mention his lap times (as might happen in other championships…), the director decided to go onboard with Andretti for his first couple of laps out of the pits.

The result is an incredible few minutes of footage as he wrestles his car around on freezing cold slick tyres (IndyCar doesn’t have tyre warmers, either) on a track surface mostly made up of slippery concrete and rubber from a previous race.

The gamble almost paid off. A few laps later other drives came into the pits for slicks and Ed Jones (who was still on wets) had a crash at Turn 7, bringing out a caution.

Usually, IndyCar closes the pits when the safety car is deployed, which would have allowed Andretti to cycle up to somewhere near the front of the field. However, on this occasion, that didn’t happen, leaving Andretti mired at the back of the field and eventually finishing 16th.

We got hosed. Was looking good until race control made their own rules, again.

Josef Newgarden had pitted just as the yellows came out, allowing him to jump from third to first and having to withstand immense pressure from Alexander Rossi to grab the win, with Takuma Sato finishing a typically battling third.

It was a terrific race, but the abiding memory will be of Andretti making steering corrections like they’re going out of fashion in one of the most dramatic onboards of the year. 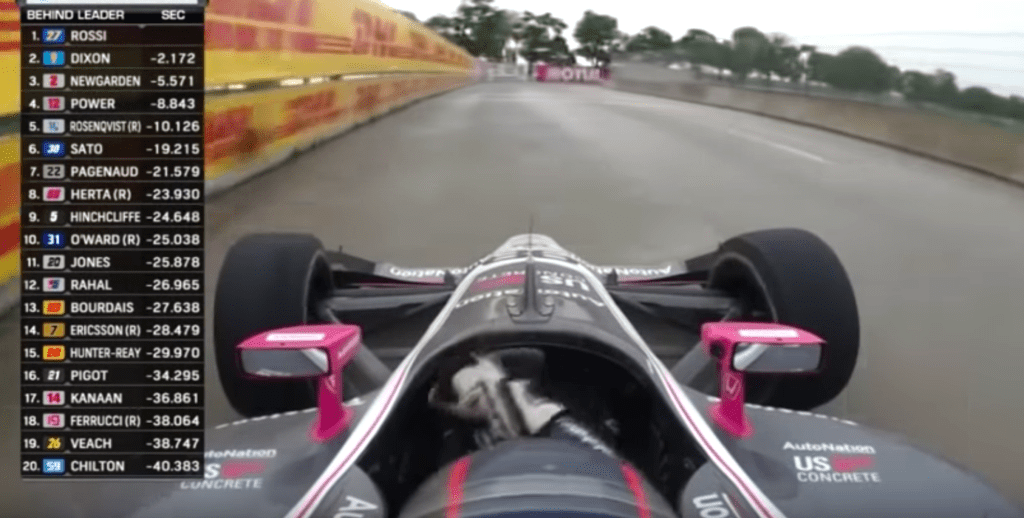