Angry GT Driver Brake Checks Rival Not Once, But Twice

Racing drivers want to win, and if they’re not winning, they want to score the best result possible – so it’s easy to understand why they occasionally see red in the heat of battle.

That’s no excuse for brake-checking someone though, and it happened twice in the space of just one corner during last weekend’s WeatherTech SportsCar Championship race.

Lexus racer Sage Karam was at the wheel of his No.14 GTD car and was in an intense scrap with the No.93 Acura of Katherine Legge, and both were getting their elbows out.

There were a few juicy moments in the run-up to the brake-checking incidents, including Karam dipping two wheels onto the grass while making a move on Legge (having previous squeezed her Acura onto the dirt moments before).

Clearly angry with the situation, Karam made the pass and at the next corner, slowed suddenly, with Legge running into the back of his Lexus. Then, at the corner exit, Karam slowed again.

The bigger second hit damaged Legge’s car, with the bonnet flying up and blocking part of her windscreen. Karam was given a 60-second stop/go penalty as a result, for avoidable risk.

Although, he didn’t seem to know where to serve the penalty and wasted 10 seconds waiting in the wrong spot, to make matters worse…

Later on, it all got very interesting on Twitter, with Karam replying to someone saying he had dirt on his tyres, and “when she rammed into me, I got wheelspin and couldn’t go anywhere”.

Dirt on tires and when she rammed into me I got wheelspin and couldn't go anywhere. Ridiculous

You started it kid. Playing chicken on the straight? I love that game. Youre reckless everywhere you race. You will lose ON & OFF the track. pic.twitter.com/O0U943WN0u

He was also called out by Legge’s team-mate Andy Lally, which descended into a brief but spicy conversation (Karam has since deleted a few of the tweets).

What do you reckon, was it brake checking, or an accident? Let us know in the comments! 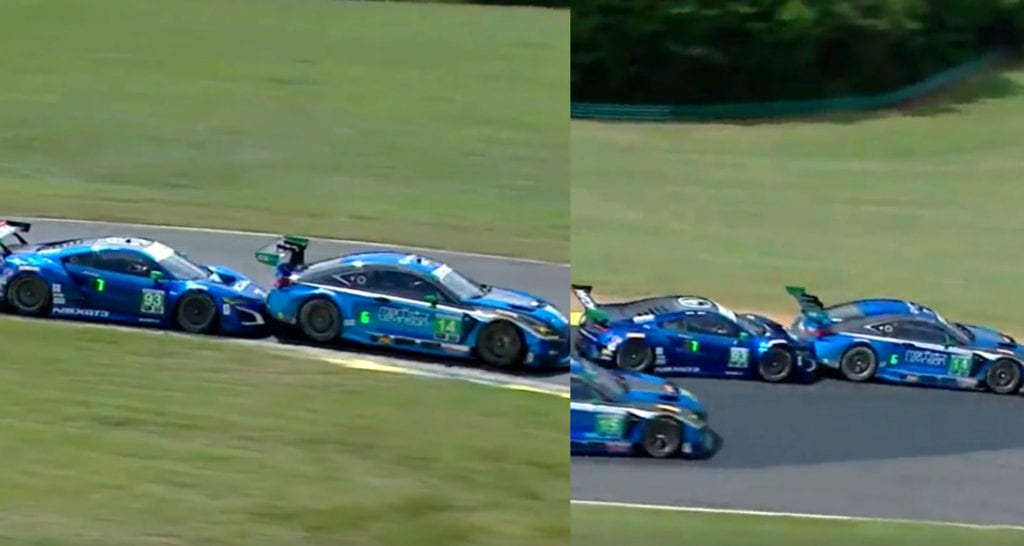