Apparently Alonso Is A Closet Nascar Fan And Would Like To Give It A Go One Day – WTF1
Skip to content
×
Formula 1 , Nascar , News

Fernando Alonso has been going openly crazy for motorsports other than Formula 1 for the last year or so. IndyCar and sportscars seem kind of obvious given that he wants to win the triple crown, but now he’s added another category to his potential future wishlist – Nascar.

As well as hosting the 24-hour endurance race where Fernando is racing this weekend, Daytona doubles up on its status as a legendary racing venue by hosting the Daytona 500, which he called “one of the best, most iconic races in the world”.

Surprisingly, Fernando is a big fan of the series and said he’d like to test a car at some point to see if he’d like to give that a go as well!

“Right now, it looks quite far because I think the driving technique and the experience all those guys have, it’s quite difficult for me to achieve that level. But I will never know until I try. I would like maybe one day to test a car, and after that, driving the car, I probably will know how enjoyable it would be racing.

He said the biggest issue would be adapting to the very different challenges that racing in Nascar poses, something he reckons would take years to achieve.

Nascar is a very unique series where the driving technique is apart. The traffic management, the strategy you need to get, the draft, and the push, from one line to another – that kind of strategy is the biggest thing that I miss [from my skillset] if I race in Nascar.”

It’s not just Fernando being polite about the sport because he’s in the area, either – he genuinely seems to love it. He recently met seven-time Nascar champion Jimmie Johnson and said he used to choose his car in a Nascar video game back in the day:

“The first time I heard his name was probably 2003 or 2004 in a Nascar video game. I used to choose him, not knowing him or not knowing the name. Just because of the car. You see all the cars, and I remember playing with another friend of mine that likes one chocolate company that I will not name. He was choosing that car, and I was choosing Jimmie’s car. Obviously, the success he had in the years in motor racing, he became a legend of our sport and have massive respect.”

These days sim racing is a pretty standard part of being a young racing driver, but imagining Fernando Alonso sitting down to play a Nascar game with a mate (probably on a PS2 or something) is just delightfully surreal.

Although Nascar can sometimes be a bit bewildering to European audiences, F1 drivers seem to be strangely drawn to it. Lewis Hamilton has often said he’d like to give it a go one day, Juan Pablo Montoya effectively quit F1 to embark on a Nascar career, and even Kimi Raikkonen did a couple of races during his sabbatical from F1. Fernando was asked if he’d ever chatted with Kimi about their apparently shared passion and said:

“With Kimi it’s quite difficult to talk about anything! Definitely not about Nascar. A lot of respect, especially with Kimi.”

Ahh, of course it is!

The day Fernando Alonso retires from F1 will be a sad one, but in a way, I’m almost kinda looking forward to it – without the demands of an F1 season to deal with he’ll be off racing everything! One week he’ll be in the middle of a 40-car pack in a Nascar race, the next doing a triple stint at night at Le Mans, and the week after that racing a lawnmower around a field in Yorkshire. Probably. 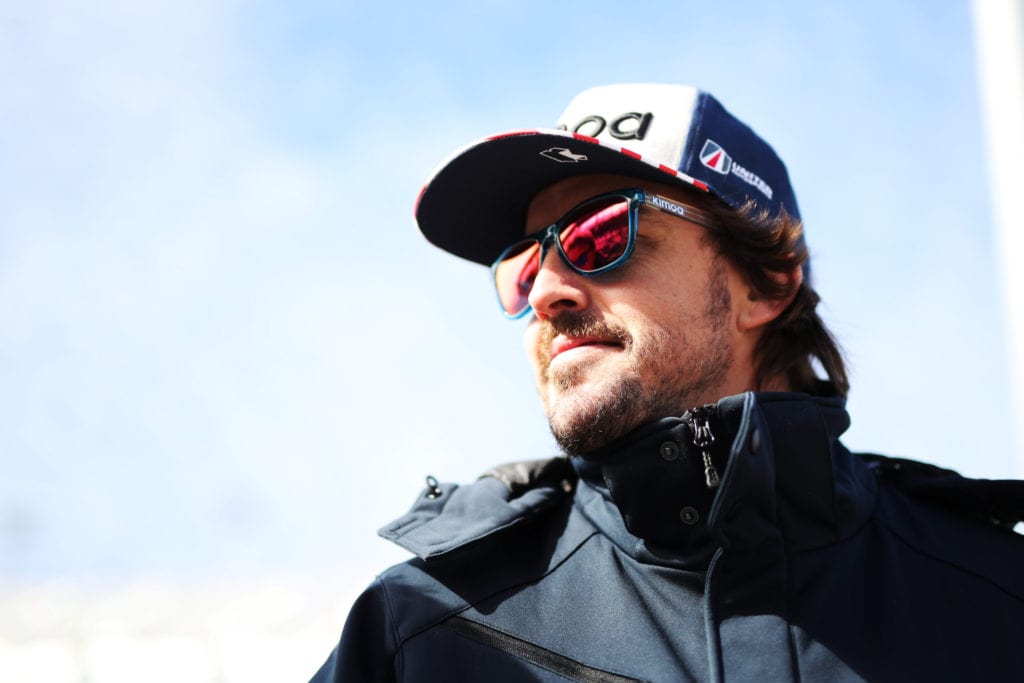